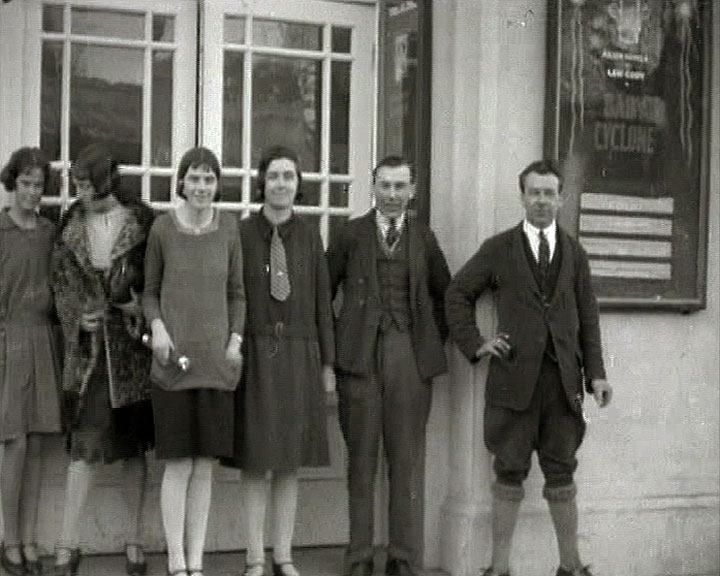 A large group of men, women and children gather on the pavement outside the Heath Theatre in Haywards Heath, having watched the silent American film 'The Baby Cyclone' (1928), starring Lew Cody. The opening shot pans along the street and shows the group walking slowly away from the cinema, past Hampton's Cycle Depot and Ballards Stores. The film then cuts to a crowd of children, many with their parents, filing past, with some of the children looking curiously into the camera and two men (the cinema's managers?) stopping to pose for a longer shot outside a shoe shop. The film ends with a quick shot of the cinema's staff standing in a line outside of cinema's entrance. (The cinema opened in 1911 and was located on The Broadway in Haywards Heath.)

The Heath Theatre on The Broadway in Haywards Heath opened in 1911. The conversion of an automobile garage, it was the town's first cinema. The cinema closed in 1936 after its owner, James Van Koert, had replaced it with two modern 'picture palaces' in the town - the Broadway (1932) and the Perrymount (1936). Both were designed for sound films, to accommodate bigger audiences and have additional facilities. (Eyles, A. et al, 1996)

The Mid Sussex Times on Tuesday 4 February 1930 (p. 7) announced that 'The Baby Cyclone' would be screened at the Heath Theatre on Thursday, Friday and Saturday of that same week. This suggests that the film was made on Saturday 8 February 1930 given the large number of children exiting the cinema at the conclusion of a Saturday morning children's programme.

The film's leader has the words 'Acadia Cinema' scratched into it. This a misspelling of the word 'Arcadia' as the Arcadia Cinema on Lewes Road, Brighton, and the Heath Theatre were both owned by James Van Koert.

Fashion Notes: This film gives an insight into the winter clothing worn by men, women and children. The clip is rich in its footage of coats, hats, shoes and boots. Many of the women’s coats are fur-trimmed.

This book has a section on cinemas in Haywards Heath. Copies are held at West Sussex Record Office, Chichester and Screen Archive South East.