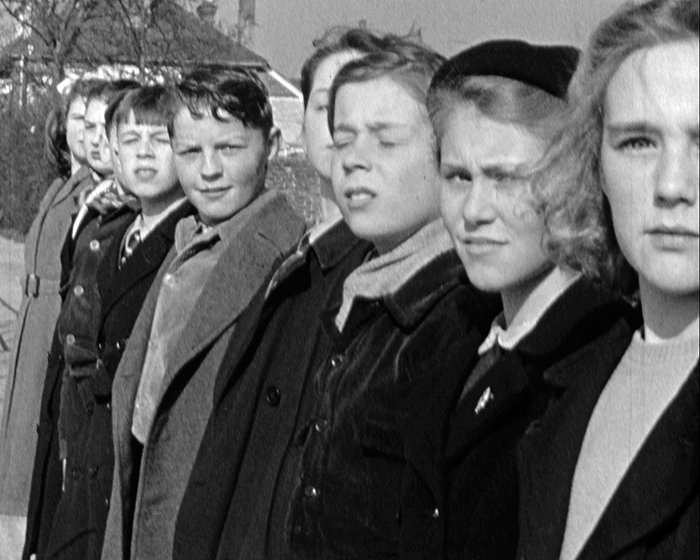 “Pennies; A story for all boys and girls who -”

Boys and girls run into the street. A boy cycles down the road. The title is seen again then “This is my story”. Students hand in notes to the teacher. A boy in a sling approaches the teacher's desk.

The boy mends his bicycle as an ice cream cart passes. After getting money from his mother, he quickly gets on his bike but it is still not working properly. He rides off anyway and meets with another boy who sits on the cross bar.

Down the street, two girls run into the road to get ice cream but meet with the bicycle that cannot brake sufficiently. As the boys swerve, the car behind drives into them. At the hospital, the mothers of the two boys are waiting. The nurse comes through the door with one of the boys, his arm in a cast. The other mother says something to the nurse but she shakes her head. The woman walks out sadly.

The mother gives her son some money. Titles read “Pennies for what?", “For Ices - If?”. A boy properly mends the brakes on his bike. Children about to cross the road look right and left. Boys on bicycles show their intentions to take a right turn. Title: “Take care or it may be pennies for ...” In the classroom, the teacher places a box on his desk. Inside is a wreath with a card saying "The End".

A Postman delivers a letter. At the Quay, sailors stand on a ship. People watch from the docks as it sails off. We are shown a letter from: “June 1st 1951 Switzerland”. Pupils eat cakes with cream and jam. The letter reveals the purpose of the trip is to compare Swiss life with England.

The school's hostel is located in the town of Gwatt, surrounded by lakes and mountains. The pupils meet their guide. They walk and ride the train through the countryside. On the visit to Clare Gorge, there are scenes of the waterfall and the river eroding the cliffs. At the farm, we see flowers and cows in a field. One laborer gathers hay while another carries a milk churn on his back.

The children swim in the lake by the hostel and attend Church service outdoors. Different methods of Swiss transport are shown. The children ride a cable car up “Jungfrau” Mountain followed by snow scenes, including a sledge pulled by dogs.

There is a pottery in Brienz. On a trip to “The Blue Lake”, the pupils dip their fingers in the water from a boat and we see fish swim below. On the journey back home, there is a ‘Newhaven’ road sign showing the East Sussex County insignia. There is a dredger in Newhaven harbour mouth, which has to be cleared of silt periodically; the harbourmaster raises black balls code on signal mast. The French Railways' cross-Channel steamer ‘Arromanches’ approaches the harbour and passes in close-up whilst sailing up River Ouse, at the completion of another crossing from Dieppe.