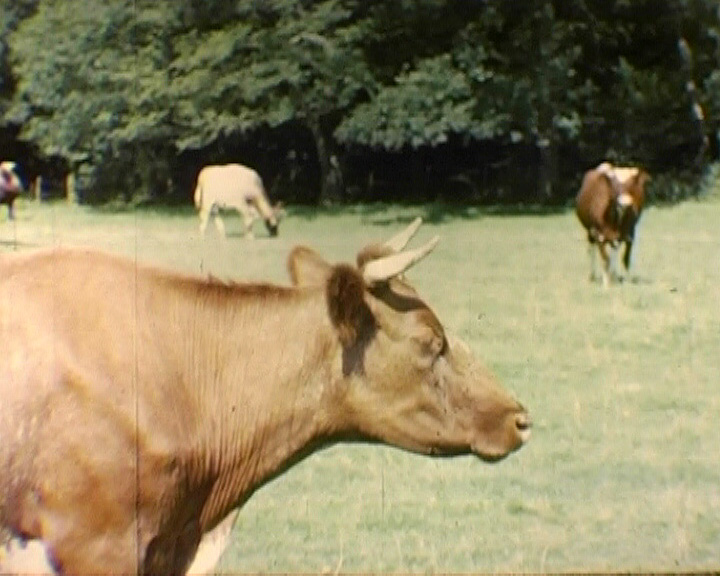 A farmer brings his cows into the milking shed. He washes their udders in preparation for milking. He milks a small amount by hand then attaches a milking machine to the udders which pumps the milk into the churns. The farmer makes notes in a logbook before pouring the buckets of milk into another machine. The cows return to field and the sheds are cleaned. Milk bottles are put through a washer and sterilized, then filled with milk by machine. Red foil tops are put on by hand. The milk crates are stacked onto a van and driven off for delivery. Finally a little girl collects the bottle of milk from the doorstep.

A Bottle of Milk (ca. 1947) was made by Mr A.C. Barnden, the headmaster of London Road School, Burgess Hill, at the nearby Pile’s Farm on London Road. It is one of several films made by Mr Barnden which are held at Screen Archive South East, including About Horse Shoes (1949) and Haytime (1949?). As in A Bottle of Milk (ca. 1947), these films record local agricultural industries. Mr Barnden used these films, as well as commercially-made educational films, as supporting audio-visual material in the classrooms of London Road School. He also made films which recorded school activities, such as The Fourth Year (1948 - 1949) and Pennies. School Trip to Switzerland (June 1951), as well as films of local interest, such as [Coronation Celebrations in Burgess Hill] (June 1953).

Screen Archive South East houses a large collection of films which look at agriculture in the South East, including [Elsted Manor Farms] (1932 - 1948) and In the Garden of England (1938?). Films such as Our Daily Bread (Mid-1930s) and A Family Tradition (1954) follow the manufacture of food from land and sea to factory.

The collection of the Agricultural Museum at Brook includes wagons, carts, reapers, threshers and other items connected with agricultural and dairy work.
http://www.agriculturalmuseumbrook.org.uk/