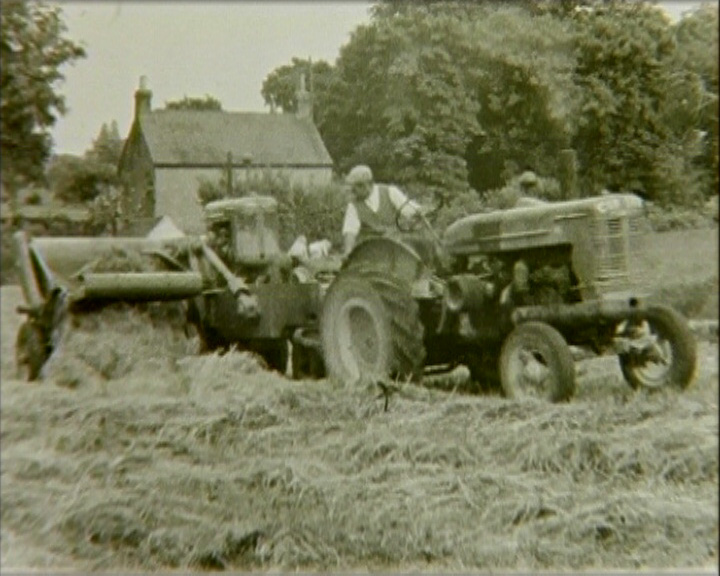 An elderly man in a suit and hat uses a scythe to cut long grass. He stops to sharpen the blade by hand. The contrast of modern machinery is illustrated with a tractor-drawn mechanical grasscutter. The improvement in speed is also shown by comparing turning the hay, first with a wooden hay rake and pitch-fork then with a horse-drawn hay turner. Other machines make light work of loading the hay onto a wagon. Hay stacks are made both by hand and a hay-stacking conveyer belt.

In the second part of the film a farmer drives a bale-making machine through a field. Diagrams explain how the machine works, and close-ups reveal the precise workings of the machine in action. Several men stack the bales in a storage shelter. The film ends by prompting the viewer to go into the fields to see these machines at work.

Mr Barnden was the headmaster of London Road School, Burgess Hill. It is likely that he made this film on a local farm. He made several films for use in his classrooms, this one being a good example of how he used film as a starting point for exploring subjects further.

The collection of the Agricultural Museum at Brook includes wagons, carts, reapers, threshers and other items connected with agricultural work.
http://www.agriculturalmuseumbrook.org.uk/

““Agriculture and domestic life are interpreted through exhibitions and displays". The Museum has a reference library "relating to vernacular architecture, building conservation and rural crafts and skills”
http://www.wealddown.co.uk/