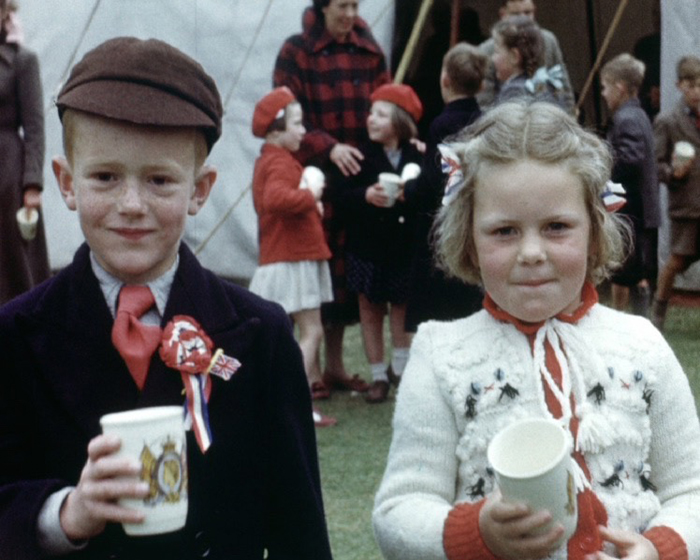 This film was one of many made by Mr A. C. Barnden, headmaster of London Road School, Burgess Hill. The film records various events taking place around the Queen’s Coronation. On Sunday the 31st of May a “Thanksgiving Service” is held outdoors. On Monday the 1st of June, children’s sports events are held and at night, a torch lit procession. On the 2nd of June, Coronation day, the film title indicates events due to take place: ‘Beakers for the children, television for the old folk and cricket for good measure’. The streets are decked with Union Jack flags and bunting and the shops and businesses are decorated in red, white and blue. At a fête, children are presented with commemorative beakers which they show off to the camera. An intertitle indicates that a special television screening of the Coronation proceedings has been organised for the elderly at the Parish Hall and elderly residents are shown arriving for the event. A charity cricket match raising funds for the ‘British Empire Cancer Campaign’ is held and scenes of the match are followed by money being collected from the crowd, for the charity. This is followed by scenes of a women’s Stool Ball match. Another intertitle states that ‘The festivities concluded with the carnival, Saturday June 6th’. Various decorated floats and tableau displays parade past along with children and adults in fancy dress costumes. Floats include: a boxing ring; pirates; Lady Godiva; a trade advertisement for ‘Coal, the modern fuel’; a tableau of the radio show ‘Worker’s Playtime’(?); ‘The conquest of Everest’; a futuristic display of a space craft with a banner stating ‘First to arrive, Venus Construction Ltd.’; men dressed as ‘Andy Pandy’(?) inside a giant television set; and representatives of ‘The Gang: Burgess Hill Christian Youth Group’. At a show ground, the Mayor (?) presents prizes and may pole dancers perform. The film ends with a pram race and a mother holding a ‘Coronation baby’ with a presentation silver spoon. The end title states ‘Long live the Queen’.