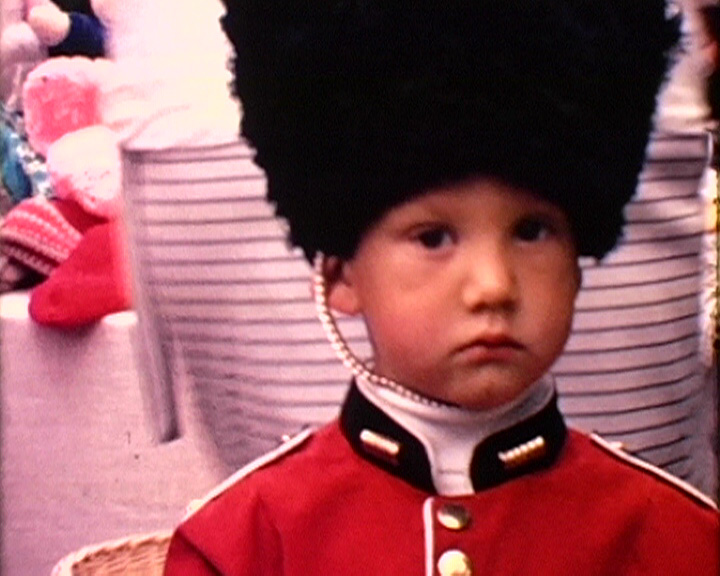 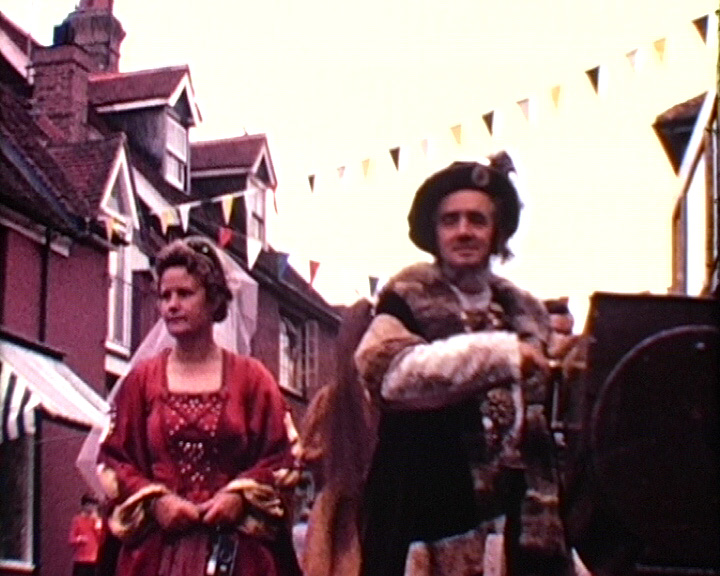 The Ditchling festival opens at the village hall where folk singers beckon the teenage entrants of the festival queen contest onto the stage. The empty village streets start to come alive with the setting up of fruit, vegetable and craft stalls. Children and adults in fancy dress peruse the goods and display their costumes to onlookers. An exterior shot of St Margaret's Church is followed by shots of bellringers at work. The festival queen has her photograph taken with her entourage in the garden of Sopers house before walking in a procession along the village streets. A formal speech launches the festival and a man dressed as the Pied Piper of Hamelin entices local children through the village. The camera focuses on individual crowd members as they watch the festival queen being crowned, maypole and morris dancing, and fancy dress competitions. The younger spectators are transfixed by a magic display and a Punch and Judy show. Local talent is on display at exhibitions of paintings, art and handicraft, and a flower show organized by the Ditchling Horticultural Society. Paraphernalia for fete games are laid out as a procession headed by a Sea Cadets marching band approaches and enters the playing field. The fete-goers enjoy swings and a merry-go-round in the summer sunshine. The festival closes with a nighttime barbeque and outdoor disco - the film concludes with a shot of exploding fireworks. 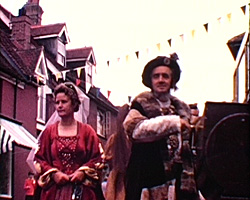 The Mid-Sussex Cine Club was established in 1965 at a time when amateur filmmaking on 8mm formats was a highly popular and accessible pastime. As with most films produced by cine societies, Ditchling Festival (1970) provides a record of a local event and uses a separate, edited soundtrack to give the images added value. The film was commissioned by the Ditchling Village Association, the body responsible for organizing the 1970 festival. The festival was partly organized as a local fundraising activity - one can assume therefore that the film was screened at a later date for additional revenue - the pronounced usage of close-up shots of individual attendees would have attracted a local audience keen to see itself on the 'big screen'.

The origins of the Ditchling Festival date back to 1312 with the granting of a Royal Charter which allowed the village to hold a three day fair around St Margaret's Day. The itinerary of the annual fair has remained fairly consistent throughout modern history with events focusing around the festival queen, traditional folk dancing, games, fancy dress competitions, a flower show and craft exhibitions. Besides offering a fun day out, the fair serves as a community-centred experience which raises money for worthy causes connected with the village. Screen Archive South East film Ditchling Fair (1979) provides another visual record of the village festival filmed by a local cine society (Haywards Heath Cine Club) - amateur films of other village fairs include St Nicholas Old and New (1952) and Thames Ditton Village Fairs (1963; 1964).

The inclusion of exhibitions of arts at Ditchling Festival reflects upon a village which has a significant tradition of art and crafts - in the early 20th century the village served as an artistic commune where artists such as Eric Gill (sculptor), Edward Johnston (calligrapher) and Frank Brangwyn (artist) established a Catholic craft-based community called the Guild of St John and St Dominic.