At 1.30pm on the 21st March 1951 bride Cynthia Hounsome arrives by car at St Swithurn's Church in East Grinstead. Wearing a simple white day dress and hat she approaches the church door on her father's (?) arm. Cynthia has been preceded by her mother (?) and sister (?) who is acting as bridesmaid. At 2pm Cynthia and her new husband Roderic Bellingham leave the church, closely followed by the wedding guests. The reception takes place at Whitehall - before entering the building, the bride and groom and their guests pose for the camera - Cynthia and Roderic seal their marriage with a kiss. Guests enjoy a meal at the sit-down reception, watching as the newlyweds ceremoniously cut the tiered wedding cake. Having changed into their going-away outfits, Cynthia and Roderic are showered with confetti and waved off by their guests as they drive up London Road (?). An intertitle concludes that this is, "The Beginning" for Mr and Mrs Bellingham. 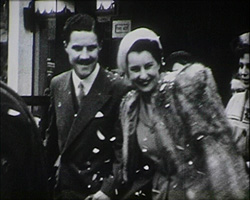 Our Wedding Day (21 March 1951) was made by Tony Hounsome, one of the bride's relatives. Tony Hounsome worked in various East Grinstead cinemas throughout his career and Screen Archive South East holds one more of his films, an animated short called Free Tee Vee (1958).

Our Wedding Day (21 March 1951) is a well-made and charming record of a family celebration. It captures the joyfulness of the day's events and follows a pattern of representation common to most amateur wedding films. This formulaic pattern can be seen in the numerous wedding films housed at Screen Archive South East, such as [Cochrane Wedding] (25 September 1937), Wedding Day (20 April 1940), [Norwood Wedding] (1957), Our Wedding (1961), and Phylis and Robin's Wedding (17 February 1973). Despite temporal and geographical differences, as well as differences in 'class', fashion and scale, the films contain many similarities, such as the filming of the bride's arrival at the church, the departure of the bride and groom after the church service, and the cutting of the cake. They therefore contain images which hold iconic status in relation to the traditional Western wedding.

Written by Tony Hounsome, this book looks at the history of cinema in East Grinstead. Copies are available at various West Sussex libraries.