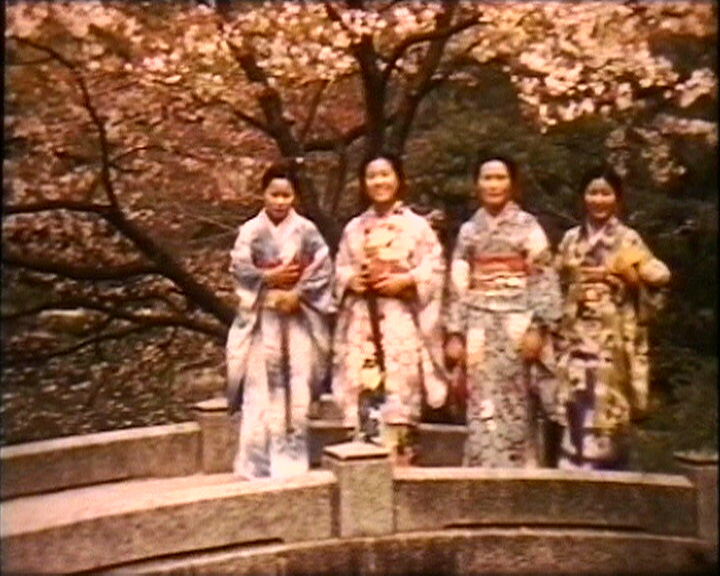 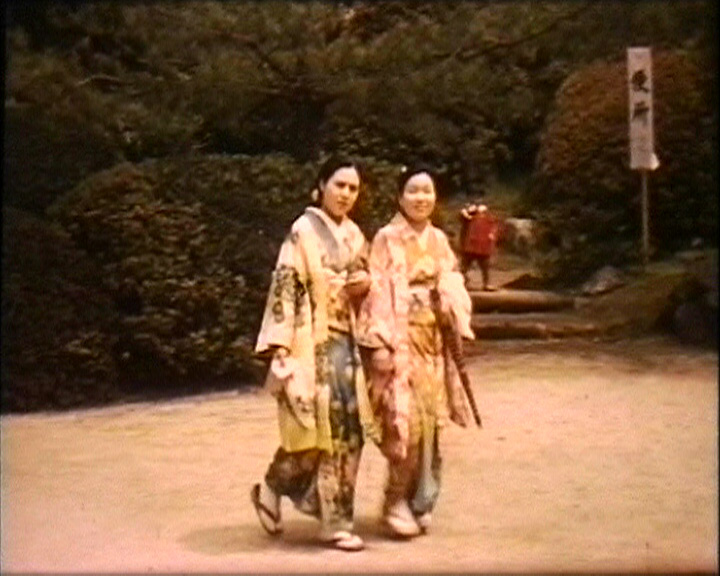 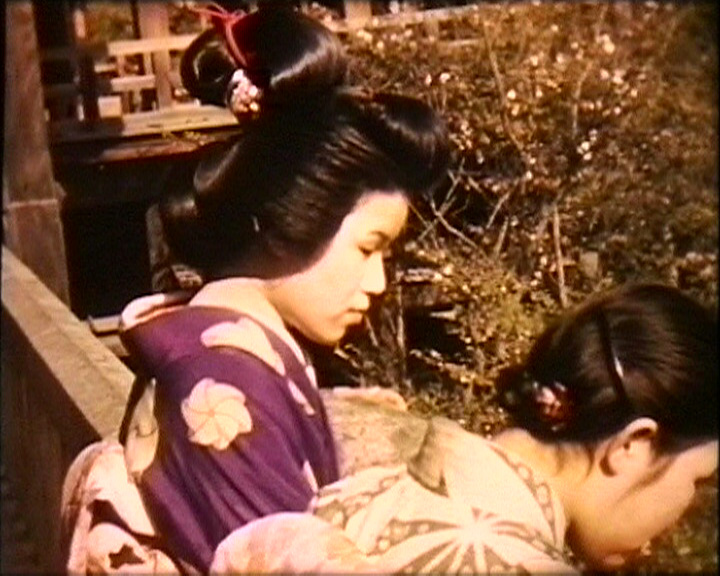 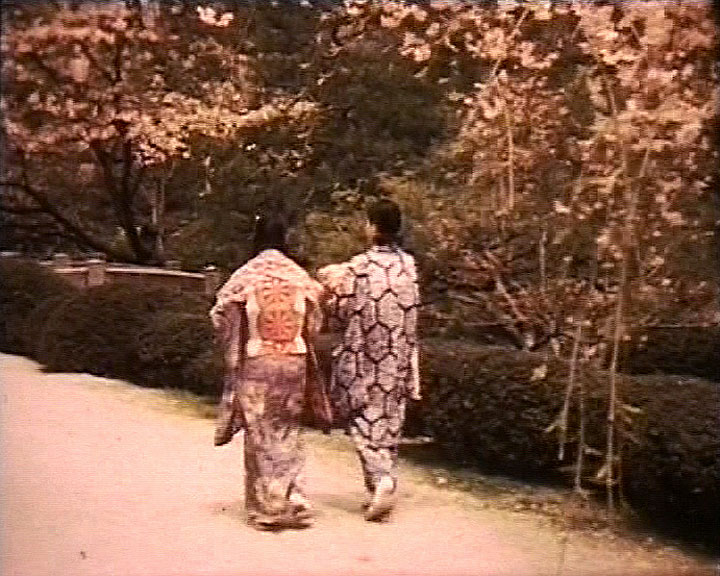 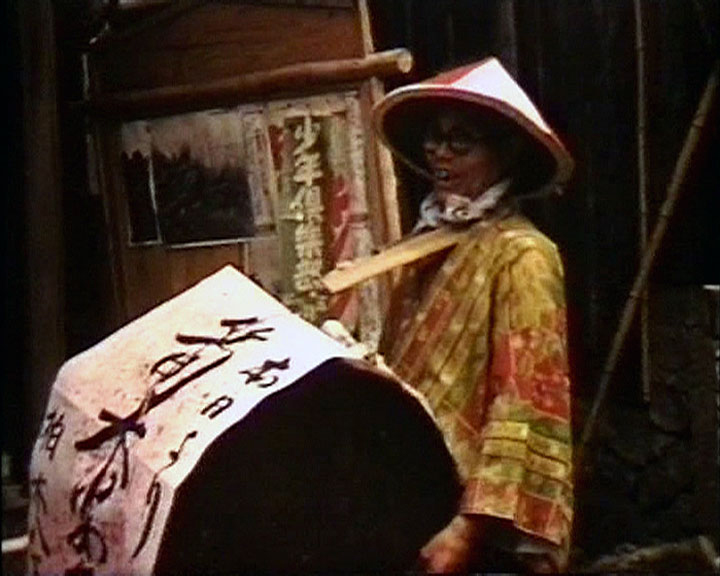 Japanese men and women dressed in traditional Japanese and modern European clothes stroll through the manicured gardens at Toba where the trees are in full blossom. Women wearing kimonos cross an ornate bridge, walk through the gardens and gather water with ladles at a shrine. The stillness of the gardens is contrasted with the hustle and bustle of a narrow market street. Shots of the various 17th century buildings of Nagoya Castle follow. Local women visit the shoreline at Kyushu and the camera films the expansive landscape. Japanese and Western tourists explore the buildings and grounds of Himeji Castle. A Japanese guide escorts Mrs Wistrand to the summit of a smoking volcano (possibly Aso or Kirishima) - the mountainous region stretches out in front of them. The island of Oshima is filmed from the shores of Kawana, Honshu. The pagodas, Torri gates, temples and bridge at Nikko attract large crowds. Various views show the snowcapped Mount Fuji. This is followed by images of a smallholding - a man and two women thresh the crop using hand-held implements. The film ends with shots of Mrs Wistrand ascending one of the snow-covered mountains Japanese mpuntains on skis. 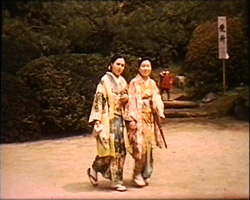 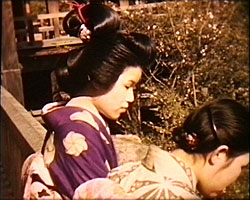 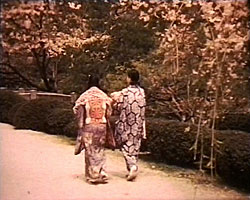 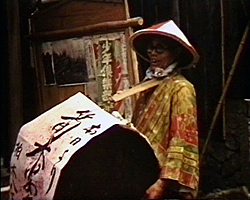 [Japanese Scenery II] (1937 - 1938?) was filmed by Tor H. (Hugo) Wistrand, a diplomat in the Swedish Legation. Between 1936 and 1939 he was stationed in Tokyo as the First Secretary to the Swedish Legation in Japan. Whilst there he recorded many of his experiences on film, documenting both his family and his travels around Asia. Screen Archive South East holds eighteen films made by Tor H. Wistrand including [Japanese Scenery I] (1937 - 1938?), [The Wistrand Family in Japan: Japanese Life] (1936 - 1938?), and [A Visit to Java, Bali and Sumatra, Angkor Wat and Bangkok] (1939). The films, all shot in colour, give a fascinating record of life in South East Asia just before the start of the Second World War. They offer an interesting contrast with the official and formal news items and documentaries from that period, and provide images of lands and a people who were to be changed forever in the coming years.

Screen Archive South East holds a number of amateur films taken by another Westerner living in Japan during the 1930s. These include [Street Scenes in Japan] (1933?) which records everyday life in rural and urban Japan, and [Life in Japan. Hunting Party. Festival. Horse Race] (1934?) which captures leisure pursuits in the country.

Screen Archive South East also houses a copy of Eat the Kimono (1989), a documentary about Japanese activist and performer Hanayagi Genshu who has dedicated her life to challenging the conservative Japanese culture.

The National Archives of Sweden

The National Archives of Sweden (Riksarkivet), "is charged with the supervision of all public archives in Sweden...[it] keeps the records of the Swedish Parliament, of the Government and the Ministries, and of the central government authorities and their predecessors. This wealth of accounts, statistics, correspondences, registers of population and taxation, minutes etc. depicts in detail the development of Swedish society through the centuries."
http://www.ra.se/start

This Pathé newsreel records the, "processes involved in harvesting and processing wheat for flour in rural Japan." The film, along with numerous others pertaining to Japan in the 1930s, can be accessed via the British Pathé Website.
http://www.britishpathe.com/

Emperor Hirohito of Japan reviews his troops in this British Movietone newsreel, filmed during the early months of the Second Sino-Japanese War. The film record can be found on The British Universities Film and Video Council's News On Screen database.
http://bufvc.ac.uk/newsonscreen

This website details over fifty of Japan's castles, including Himeji Castle and Nagoya Castle, both of which were featured in [Japanese Scenery II] (1937-1938?).
http://www.jcastle.info/castle/