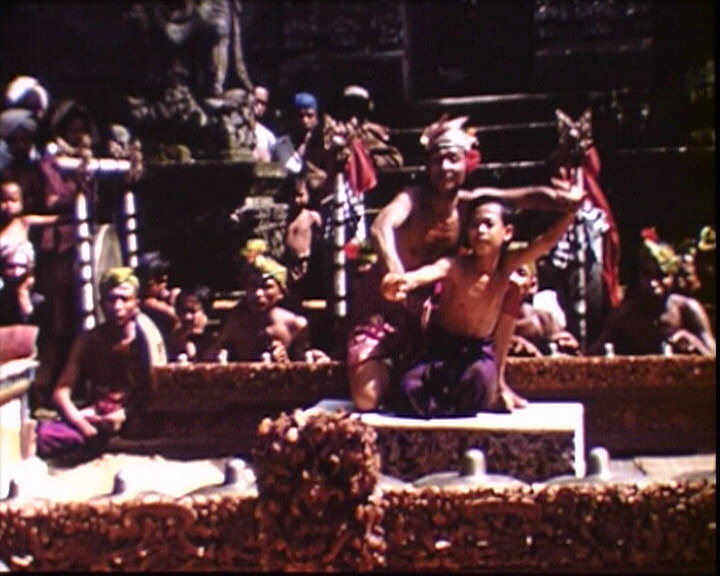 The film opens with images of the temples and palaces of Angkor Wat. The cameraman focuses on the architecture of the buildings and their ornate carvings - there are no other tourists visible at the site. He next visits Bangkok, filming the gilded Temple of the Emerald Buddha (War Phra Kaeo) and a busy floating market. Men, women and children populate the waterway, buying and selling various wares. Back on land indigenous men display a snake to the camera, occasionally encouraging it to release its venom. They also handle a large striped snake, feeding it liquid through a tube.

The villages and landscape of Sumatra are explored. Some of the inhabitants of a village in a forest clearing seem wary of the camera; others dance and play musical instruments outside one of the traditional Karo Batak houses. Traders bring their bananas to a lakeside market in dugouts. Other traditional sailing vessels also traverse Lake Toba. The film-maker ascends Mount Sibayak, filming the sulphurous gases which escape the fissures of the active volcano. Workers work in the padi fields, a plinth marks the Equator and a waterfall punctuates the flora-rich landscape. The journey continues at The Temple of Borobudur.

In Bali the film-maker continues to record the indigenous people and the rural landscape. Bare-breasted women go about their business in the villages and at a busy street market, carrying baskets on their heads laden with goods. Locals form a procession, carrying offerings including flowers and candles to the gods.

The film continues with a sequence dedicated to Balinese dancing. The internationally renowned dancer and choreographer I Ketut Marya (Mario) is filmed performing his own dance Kebyar Duduk, accompanied by a Gamalan orchestra. He is then seen tutoring young boys in the dance, encouraging emotive gestures in a performance which emphasizes the upper torso of the body. The highly developed and codified performances continue with the Barong Dance, the Kris Dance (with knives) and the Legong Dance. Male and female dancers perform in these physically demanding dances, displaying femininity and grace, strength, emotion and dynamism.

Images of a Hindu mass funeral brings the film to an end. Male villagers and mourners carry a multi-tiered tower bedecked in colourful flowers and silk to the cremation ground, running in circles as a ploy to disorientate the deceased's' spirits and to prevent them from coming home. Once at the cremation ground, the bodies of about ten locals are transferred from the tower to funeral sarcophaguses shaped like bulls.

[A Visit to Java, Bali and Sumatra, Angkor Wat and Bangkok] (1939) was filmed by Tor H. (Hugo) Wistrand, a diplomat in the Swedish Legation. Whilst stationed in Tokyo as First Secretary to the Swedish Legation in Japan, he toured South East Asia, visiting, amongst other places, China and Korea. His journeys around Indonesia, Cambodia and Thailand took place at the end of his Tokyo stationing, in the months before he took up his next posting. Wistrand travelled alone whilst his wife and two daughters relocated to the United States of America where they awaited the start of the Second World War. In many ways his travels and resultant filming demonstrate an astuteness; Wistrand toured the region in the months before it was changed forever by a global war.

[A Visit to Java, Bali and Sumatra, Angkor Wat and Bangkok] (1939) is an immensely rich film, open to a wide range of research topics. The geographical spread of the film provides an insight into the Western tourist trail which was evolving in the region during the 1920s and 1930s. Tourists were being attracted into the region by the growing infiltration of South East Asian culture in Western life. Mainstream feature films, such as Kriss(1932), ethnographic publications, guide books and exhibitions, such as the 1931 Colonial Exposition, were bringing awareness of the area and its culture to the educated elite. The indigenous people and the Dutch settlers took advantage of this growing interest, building hotels and ensuring that there was good public transport in the region.

This exploitation of the tourist trail also had an impact on Balinese culture, as evidenced in Wistrand's film. The dances captured in his film are of importance for numerous reasons. Firstly, the film contains extremely rare pre-war colour images of the renowned Balinese dancers and their dances. Secondly, they represent invented traditions. Although presented to the cultural tourists as authentic dances, some were in fact recently choreographed. They were created with reference to the visual nature of the culture, providing performances ideally suited to the 'Western Gaze' and ultimately the camera of the Western film-maker. Images of the exotic, the visual, and the dramatic thus dominate the film, images which were carefully selected by the film-maker. Consequently, [A Visit to Java, Bali and Sumatra, Angkor Wat and Bangkok] (1939) provides an insight into a culture that has been, and continues to be, influenced by mass tourism.

Screen Archive South East holds several other films made by Tor H. Wistrand during his postings in Asia. Like [A Visit to Java, Bali and Sumatra, Angkor Wat and Bangkok] (1939), they demonstrate a desire to capture the indigenous people, cultures, lands and architecture. These colour films include [Japanese Scenery II] (1937 - 1939?) and [Visit to China and Korea] (1938?).

Screen Archive South East also houses Java Tour. Christmas 1929. Batavia to Soerabaya en Voiture. (1929), an earlier film which charts the motorholiday of a British couple lived and worked in Indonesia during the 1920s and 1930s. It offers an interesting point of contrast with [A Visit to Java, Bali and Sumatra, Angkor Wat and Bangkok] (1939).

This book was based on the 1936-1939 Bali field trip of pioneering visual anthropologists Gregory Bateson and Margaret Mead. The book contains over 700 photographs and charts the formation of the Balinese culture and character. Copies of the book are available at the British Library.

This book, written by dance critic Beryl de Zoete and artist Walter Spies, looks at the relationship between dance, drama and religion in Balinese culture, and is based on their experiences in Bali during the 1930s. Copies of the book are available at the British Library.

Sir Bruce Lockhart describes his travels around South East Asia during the mid-1930s. Copies of the book are available at the British Library.

Musicologist Colin McPhee's memoir recounts his living experiences in Bali during the 1930s, narrating the story of a Balinese village at a time when tourism and Western culture began to exert their influence. Copies of the book are available at the British Library.

"The papers of Margaret Mead were bequeathed to the Library of Congress upon her death in 1978. The entire collection comprises approximately five hundred thousand items and includes thousands of photographs, more than a thousand pieces of recorded sound tapes and cassettes, and over five hundred reels of motion picture film. The Library of Congress is presently working on a project to digitize and make available over the Internet approximately thirty-two thousand photographs and twenty thousand pages of selected field notes that document her field expedition to study the Balinese in Indonesia and the Iatmul people of Papua New Guinea from 1936 to 1939."
http://www.loc.gov/

This Pathé newsreel features a Balinese dance troupe. The film can be accessed via the British Pathé Website.
http://www.britishpathe.com/

This film, made by pioneering visual anthropologists Gregory Bateson and Margaret Mead following their 1936-1939 field trip to Bali, features a performance of the kris dance, a Balinese ceremonial Dance which dramatizes the never-ending struggle between the witch and the dragon. The kris dance is also featured in [A Visit to Java, Bali and Sumatra, Angkor Wat and Bangkok] (1939) - it involves the dancers going into trances wherein their turn their daggers against their breasts without injury. Trance and Dance in Bali (1952) is available via The Library of Congress.
http://www.loc.gov/

"Bali Film Commission (BFC) was originally established in April 2002 by the Bali Government Tourism Authority as 'The Gateway - Bali Film Promotion Board' to professionally assist foreign production companies filming on Bali and surrounding islands of Indonesia." The BFC has co-produced a documentary film project on 'The Beginnings of Travel to Bali' which is centred around Theodore Wistrand's film [A Visit to Java, Bali and Sumatra, Angkor Wat and Bangkok] (1939).
http://www.balifilm.com