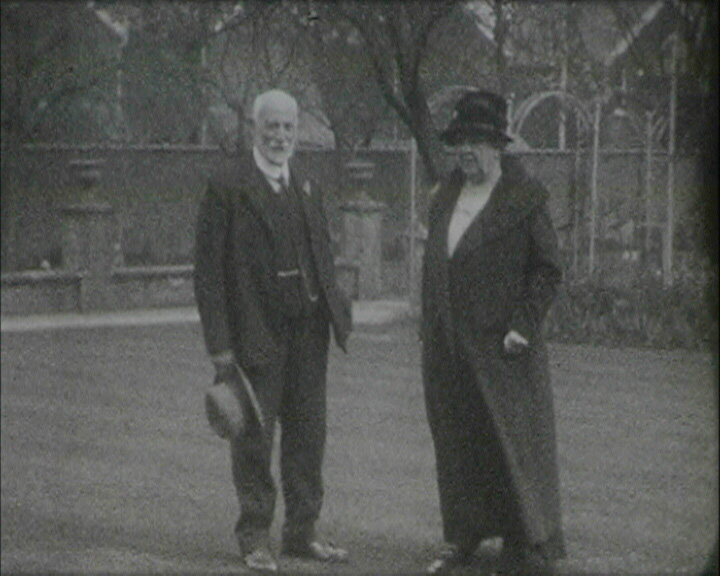 On 16th June 1931 the members of the Hazeldene Orchestra file out of 'Hazeldene', the family home of Moses and Ruth Nightingale, carrying their instruments and chairs. Once in the garden they pose for a group photograph. Moses joins the orchestra on the manicured lawn, conducting the multigenerational musicians whilst his wife of nearly fifty years listens - an upright piano has even been brought into the garden for the occasion.

Ruth and Moses Nightingale are joined by members of their extended family in Hazeldene's garden to celebrate their golden wedding anniversary on 23rd April 1934. The movements of the camera-conscious attendees are orchestrated for various image-capturing apparatus - son Percy Nightingale is seen filming the events with a Baby Pathé (?) camera, and a stills photographer takes several posed group shots. After walking arm-in-arm through the garden, Ruth and Moses Nightingale are joined by their brothers and sisters, as well as their original six bridesmaids and best man, and later by the younger generations, for group photographs.

The film ends with images of Ruth and Moses Nightingale with daughter Betty and granddaughter Margaret walking in Hazeldene's garden on a June day in 1934.

[Hazeldene Orchestra]. Golden Wedding Celebrations at 'Hazeldene' (16 June 1931; 23 April 1934) is perhaps the film which best exemplifies the collection of Nightingale family films housed at Screen Archive South East. The footage is believed to have been shot by brother and sister Percy Nightingale and Florence Nightingale Payne - both were keen amateur film-makers who shot the bulk of the 1920s - 1930s material in the collection. Their films recorded local interest events such as those in [Crawley Events] (1928 - 1937), family holidays including [Devon Holiday. Part 1] (1932) and [Cruise to Norway] (July 1933), and family gatherings including weddings, [Croydon Aerodrome. Margaret's Wedding] (1932; 27 March 1943), Christmases, [Xmas at Hazeldene. Picking Spring Flowers] (1928; 1929), and christenings [Moruth. School Sports. Christening] (ca. 1929). The films portray a close-knit family which valued regular family events. All of the events are filmed outside (due primarily to the constraints of the 9.5mm technology), with many of them taking place in the gardens of the various family homes. For example, the gardens of Percy's marital home 'Nutmead' and Florence's marital home 'Moruth' feature in 'Nutmead'. Crawley (1927 - 1929) and [Golden Wedding. 'Moruth' Garden Scenes] (ca. 1928; 23 April 1934; ca. 1935). It should be noted that the latter film also includes further footage of the 1934 Golden Wedding celebrations at 'Hazeldene'.

'Hazeldene' was built by Moses Nightingale in the 1890s for him and his wife Ruth and their four children Betty, Florence, Moe and Percy. The large detached house was set in impressive suburban grounds, and was a testament to Moses' success as a local corn merchant. His success as a businessman as well as his philanthropic activities, as witnessed in [Crawley Events] (1928 - 1937), and his numerous public office roles (including a stint as President of the Crawley Chamber of Commerce), made him a notable figure in the local community. Consequently, personal celebrations such as his golden wedding anniversary were widely reported in local newspapers. Furthermore, he was widely known as a keen musician. In 1884 he founded the 'Hazeldene Orchestra', acting as its conductor into the 1930s. The orchestra was populated by friends, family and acquaintances as witnessed both in [Hazeldene Orchestra]. Golden Wedding Celebrations at 'Hazeldene' (16 June 1931; 23 April 1934) and ['Nutmead' Play. 'Hazeldene Orchestra'] (1927; 1928; 1931).

Screen Archive South East's Nightingale collection offers a fascinating insight into the attitudes and activities of an extended, affluent family living in the South East during the 1920s and 1930s. And it is a collection enhanced by films from the 1980s such as [Sue's Wedding] (16 July 1983) and [Wedding. Garden] (20 April 1985) which record family members coming together to celebrate the weddings of Moses Nightingale's great-grandchildren.

A local newspaper article which details the Golden Wedding celebrations of Ruth and Moses Nightingale.

The West Sussex Record Office (WSRO) houses a collection of photograph albums, loose photographs and documents from the Nightingale family. In addition, the collection includes a CD-Rom which has been created by a relative, detailing the extensive family tree - it includes archive photographs and moving images of the Nightingale family. A copy of the CD-Rom is also available via the Screen Archive South East office, although advance notice would be needed prior to viewing it.
https://www.westsussex.gov.uk/leisure-recreation-and-community/history-and-heritage/west-sussex-record-office/