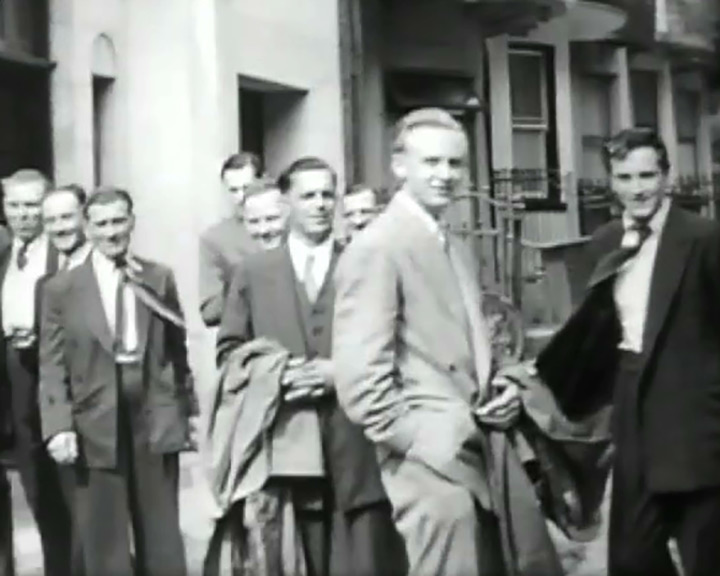 Opening titles: "J. Ford & Sons (Lambeth) Limited Centenary 1850 - 1950", "Celebration Outing September 9th 1950" and "At Fitzalan Street". The film opens with a scenes of the workers of J. Ford and Sons assembled for a photograph outside the company's premises. Two coaches are parked on the side of the road, they pull off. Title: "Outside The Metropole Brighton After The Luncheon"; a small group of men stand outside a side entrance smoking. Title: "E.T.S. Eavis (Left) and R.H. Graham"; the two men stand outside a bed and breakfast talking, more shots of the men outside the hotel smoking; some of them pose for the camera. Brief shot of some of the men on the West Pier. Titles: "Some Of The Centenary Year Jobs" and "Banstead Road Houses"; shots of a houses being built, a sign reads: "Ford". Title: "Reinstatement of the Economy Garage Union Road"; scenes of builders working on a large shed. Title: "The Almshouses, Ferndale Road, Brixton"; shots of the almshouses, workmen stand outside. Title: "St. Jude's Vicarage, Dulwich Road, Rebuild"; shots of the new vicarage and men working on site. Title: "Annesworthy Crescent, Thornton Heath Rebuilds"; shots of houses. Title: "St. Mary's Vicarage, Peckham, Rebuild"; shots of the new vicarage. The film continues to show examples of work from 1950 and even earlier, including housing in Lanfranc Street and ends shots accompanied by intertitles titles detailing employees who have died (possibly during WW2?).