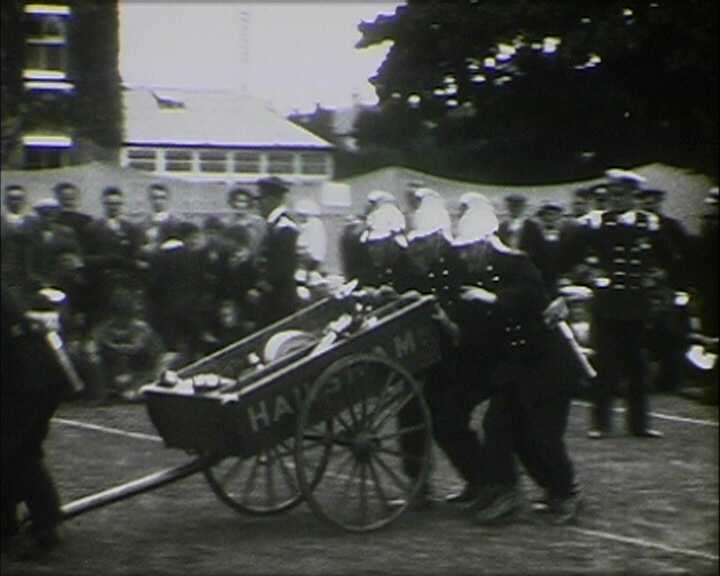 The Hailsham fire brigade demonstrate a rescue and other manoeuvres; the firemen hand-push a cart of equipment sign written 'Hailsham', a rescue takes place at the top of a high ladder and hoses are rolled out from a fire engine.

Smoke pours from the top of a building. Fire-fighters in Haywards Heath drop what they are doing at home and head for the fire station on their bikes. Several fire engines leave the station. They arrive at the fire in a building called ‘Ivy Dene’.

The Horley brigade tackles a haystack fire. After the fire they clean the hoses and engines. A fireman holds up a sign ‘Barcombe Mills Fire March 1939’. Scenes of the fire-damaged buildings, charred beams and the tangled wreckage of machinery. The film ends with a brief demonstration of a hose and water pump.

[Fire Brigade] (ca. 1937; 1939) was made by amateur film-maker Sid Horton. He made his his earliest films on 9.5mm and worked for the Army as a mobile projectionist during the Second World War. Upon his return to civilian life, Sid was instrumental in the 1949 founding of Haywards Heath and District Amateur Cine Society.

This film contains many iconographic images with the subject matter lending itself to the amateur film-maker. Events such as the display which starts the film serve as moments of visual spectacle for both the event's spectators and the camera. Screen Archive South East holds several films which have recorded such events throughout the years. These include [Cuckfield Fire Brigade] (1920s - 1930s], Fire in Their Eyes (ca. 1937; 1968; ca. 1978), Fire Service Display (1955?), [Surrey County Council Fire Brigade Training Centre and Garden Party] (1964?) and East Sussex County Council Fire Brigade Competition (1969 - 1970).

Screen Archive South East houses other films related to the fire services. For example, A Molesey Pageant (July 1913) contains footage of a pageant which was part of a fundraising fete in aid of the widows’ and orphans’ fund of the National Fire Brigades Union. There are also several films from the Dennis Specialist Vehicles collection, including [Fire Engine; Touring Around Guildford, Godalming and Haslemere] (1967?) and [The Dennis Factory and Their Products] (1968?).

Screen Archive South East also holds a large collection of films made by other members of Haywards Heath and District Amateur Cine Society, including Horley Coronation Fete (30 May 1953), Visit Our Marina (ca. 1979) and Mid Sussex Newsreel 2003 (2003).

The Surrey History Service collects and preserves archives and printed material relating to all aspects of the history of Surrey. The Centre also has a selection of films from the Screen Archive South East. Special collections include the Dennis Specialist Vehicles collection, and its collections catalogue is searchable online.
http://new.surreycc.gov.uk/heritage-culture-and-recreation/archives-and-history/surrey-history-centre

The Surrey Fire Brigades Preservation Trust in Reigate houses the Fire Brigade Museum which holds photographs, uniforms, books, records and objets relating to the history of firefighting in Surrey, as well as fire engines dating as far back as 1744.
http://firebrigadesofsurreypreservationtrust.webs.com/