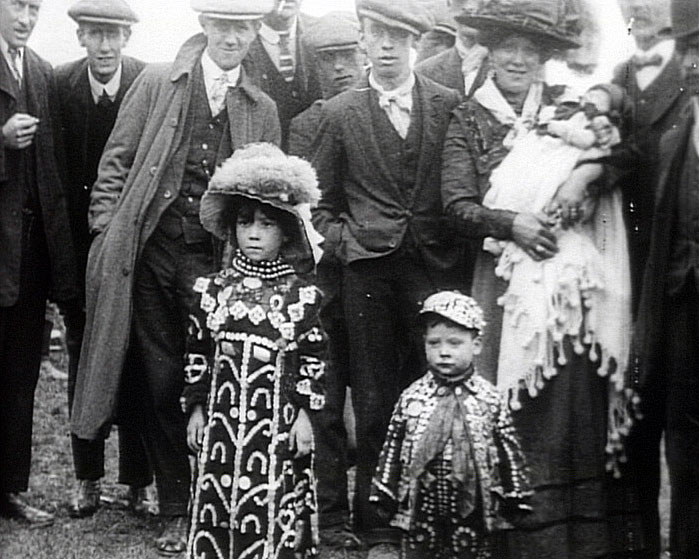 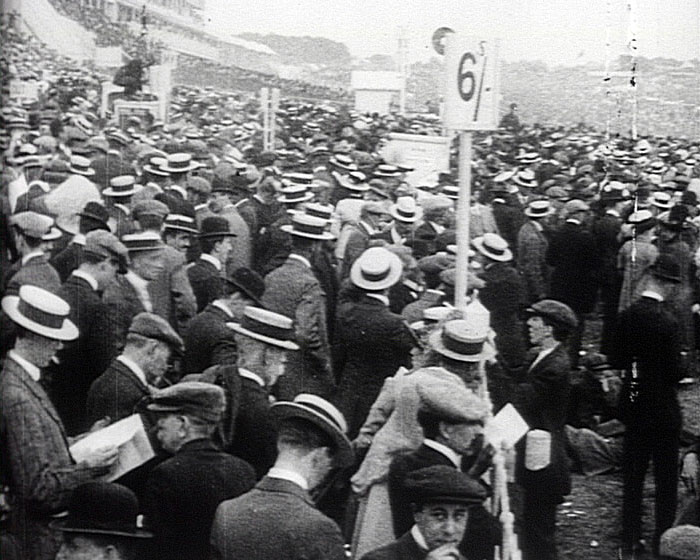 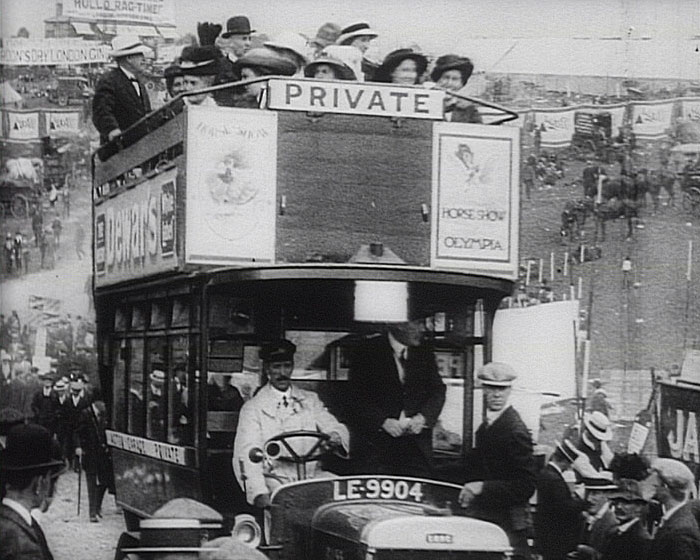 The film opens with shots of racegoers participating in various activities at Epsom Racecourse - a barber is filmed shaving a customer, elsewhere two men box each other in front of an enthusiastic crowd. The social mix of the racegoers is represented by two extremes - two young children wearing Pearly King and Queen outfits pose for the camera surrounded by their working class elders whilst King George V and Queen Mary arrive at the socially exclusive Royal enclosure. Other racegoers reach the racecourse aboard large, fast-moving horse-drawn carriages and a sedate open-topped double-decker bus. Bookies' stalls are peppered amongst the huge crowds which fill the area in front of the grandstand - they all watch as the sixteen Derby runners start to race. Craganour and his jockey Johnny Reiff pass the finish line in first place (they would later be disqualified with the race awarded instead to Edwin Piper aboard Aboyeur) - the horses and jockeys are crowded by spectators as they are led away from the racecourse following the race's conclusion. 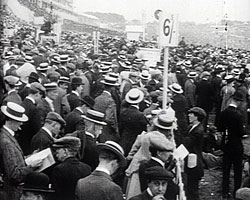 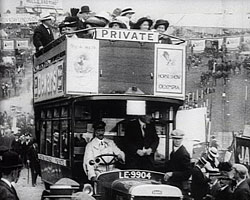 The 1910s proved to be a hugely significant time in the history of cinema in Britain. It was a decade which saw the establishment of purpose-built cinemas both in response to, and in encouragement of, the increasing standardization of spectatorship. Many millions of people were visiting the cinema every week, watching programmes which comprised a range of material including features and shorts. Newsreels were integral to the cinema programmes, supplying national and international news and current events to people on a scale hitherto unknown. The most prominent newsreel companies in Britain during this era were Pathé Gazette, Topical Budget and Gaumont Graphic. The Warwick Trading Company which made The Nineteen Thirteen Derby At Epsom (1913) and Funeral Procession of the Woman Who Dared (4 June 1913; 14 June 1913) - both of which are housed at Screen Archive South East - was also known for its commitment to news and actuality. This commitment had been nurtured by its managing director Charles Urban who had helped build Warwick Trading into one of the country's biggest production and distribution companies at the turn on the century. Urban's enthusiasm and belief that cinema audiences could be educated through entertainment attracted leading figures to the company, including the Hove pioneers G. Albert Smith and James Williamson.

Since its inception in the late 18th century, The Epsom Derby has commanded news coverage. As one of the world's most flat prestigious thoroughbred horseraces The Derby attracts thousands of racegoers from across all social classes to Epsom racecourse every June. The advent of moving images allowed for the excitement of the event to be witnessed by global audiences, and the leading newsreel companies ensured that their cameras were present to film the day.

The 1913 Epsom Derby has come to be remembered as more than just a horserace - it was an event at which the Suffrage Movement gained its first martyr, captured on film for contemporary and future audiences. For reasons which remain unclear to this day, Emily Davison stepped out in front of the King's horse Anmer as it rounded Tattenham Corner, resulting in head injuries from which she died four days later. It is generally assumed that Emily Davison had been attempting to attach the tricolour ribbon of the Women's Social and Political Union (WSPU) to the horse's bridle - it was a statement made not only in front of the King and the racegoers, but also in front of the millions watching in cinemas. The presence of newsreel cameras guaranteed nationwide publicity at a time when the Suffrage Movement was gathering strength and visibility. The militant arm of the movement was driven by a belief in 'deeds not words' and the new medium of cinema provided the activists with a tool of visual spectacle. Their awareness of this was exemplified by the ceremonial funeral afforded Emily Davison following her 'sacrificial' death which is recorded in the Screen Archive South East film Funeral of the Woman Who Dared (4 June 1913; 14 June 1913). Her coffin was carried through central London, accompanied by 6,000 women with carefully worded banners and ten brass bands before being taken by train for burial at Davison's family grave in Morpeth, Northumberland. This visual nature of this spectacle was perfectly suited to the gaze of the moving image camera and it ensured extensive media coverage for the Suffrage Movement.

The reason for the absence of footage of Emily Davison's protest in The Nineteen Thirteen Derby at Epsom (1913) is unknown. It may have been that The Warwick Trading Company decided that it would be inappropriate to represent it in a sports item. It is more probable however that the company did not initially have any footage of it - Emily Davison's split-second actions were only caught incidentally by a few cameras and therefore the earliest editions of many newsreels (which could be processed, edited and in the cinemas within 24 hours of the events) did not include footage later sourced from other companies.

Screen Archive South East holds several other films which record Epsom Derby across the years. These include a professional film of the 1946 Derby called [Movietone News] (1945; 1946) and a Derby from the 1960s which was recorded by an amateur film-maker in Racing (1960s).

A copy of this biography of Charles Urban - the man who oversaw the early years of The Warwick Trading Company - is available at the BFI Reuben Library.

"Footage from 1912 & 1913 Derby with suffragette Emily Davison running into path of horse." The film can be accessed via the British Pathé Website.
http://www.britishpathe.com/

This Topical Budget newsreel includes footage of Emily Davison jumping in front of the King's horse at the 1913 Derby. The film record can be found on The British Universities Film and Video Council's News On Screen database.
http://bufvc.ac.uk/newsonscreen

This complete print of a 1913 Pathé Gazette includes footage of Emily Davison jumping in front of the King's horse at the 1913 Derby. The film can be accessed via the British Pathé Website.
http://www.britishpathe.com/

This is the website for the British Universities Film and Video Council (BUFVC), "a representative body which promotes the production, study and use of film and related media in higher and further education and research." The website includes the News On Screen database and has links to various newsreel resources.
http://www.bufvc.ac.uk/