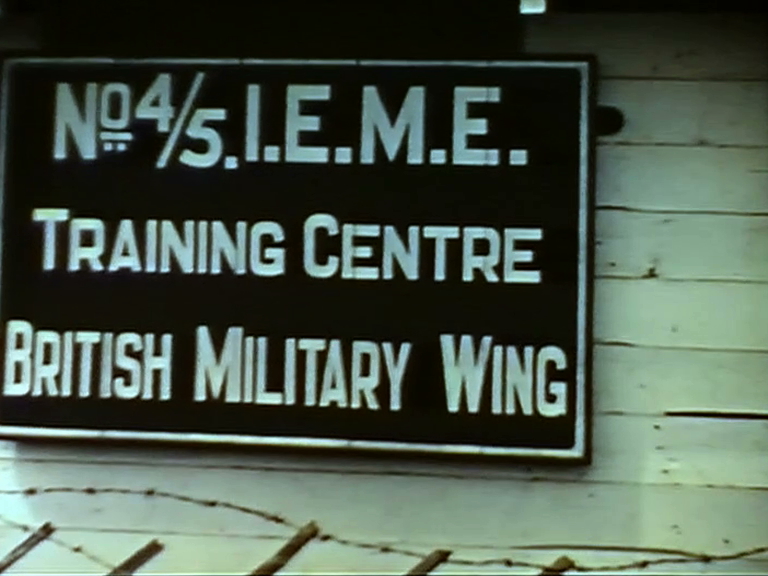 Intertitle: 'Quetta Recovery Course - Officers Technical Training Centre" where portrait shots of two men, one in uniform and another in civilian clothing are followed by scenes showing an armoured military vehicle being driven around a training area. Group scenes follow, showing a group of men sat on sofas and chairs socialising outside a barracks building, further military training scenes with large recovery vehicles towing a vehicle out of a river, urban town scenes showing an open market place, a series of colonial homes on a street, portrait shots of a man and a woman, street traders, costermongers and locals selling their wares on the street.

Intertitle: 'Country-side around Rawalpindi - 118 degrees in the shade" At a lake a woman in short beachware sunbathes on a towel and later hand feeds a nomadic goat. Shots of a man in portrait are followed by similar shots of a woman walking towards the camera next to a car. Later we see a group of men and women gathered together to play golf. This shot quickly cuts back to the woman sunbathing and the pair being observed by a group of local young children dressed in Shalwar Kameez or Kurta style clothing as they film their surroundings.

Intertitle: 'Poona and Kirkee' In Poona, the film-maker captures street scenes of local people going about their everyday life, people on carts being drawn by two long horn cattle, a group of people bathing and washing clothing in a river, bathing cattle and a woman making mud patties on the bank and leaving them to dry in the sun. A man driving a Jeep 4x4 vehicle is followed by a woman in a second vehicle who drives the vehicle around a courtyard.

On Reel 2 - The black and white scenes are followed by a series of scenes in colour, opening with a title: India 1946-7. Intertitle: Cricket for the Governor of Bombay" The section shows a group of men dressed in cricket whites and knee pads walking on to a Cricket crease as well as in portrait towards the camera. The men are accompanied by two dogs who jump about with energy.

Intertitle: 'A Day at Mahableshwar' Scenes show a man and a woman having a picnic sat on grass next to a river. They share sandwiches as a group of locals sit on the other side of the river. The scene changes to show a woman in a Sari sat on the bare earth, weaving reeds or rushes together. The shot changes to a man driving a car as the woman stands waving at the camera through the sunroof. Local scenes follow of a family group walking along a road, closing with portrait shots of a western man and woman and their pet dog in the drive way to a house.

Intertitle: 'Kirkee Bazaar - Divali Festival' Market traders display a series of figure effigies, vegetables and spice wares, while others stand and stare at the film maker recording the scene.

A sign reads " No. 4/5. I.E.M.E. Training Centre British Military Wing'' on the side of a building followed by scenes of the I.E.M.E. School at Kirkee with tanks, armoured vehicles and long barracks and out buildings.

Intertitle:" 'Churchill' Flame Thrower." Black and white scenes follow a colour title, showing a large armoured military vehicle towing a smaller vehicle through a large open space. The vehicle fires flames from an opening at the front, several hundred metres in front of the vehicle followed by clouds of black acrid smoke. The scene is filmed from both adjacent to and onboard the vehicle, down the nozzle as the propellent is launched from the front.

In a serif font the intertitle reads: Suez Canal. Connecting the Mediterranean and Red Seas is the 100 miles long artificial canal. The Red Sea Coastline. ' The view shows buildings along a low shoreline with mountains behind, as the ship enters the Suez Canal.

Intertitle: These trees act as wind-breakers to prevent sand seeping into the water. " Views of the landscape either side of the canal, lined with trees flanked with sandy terrain, two nomadic tents and a group of camels tethered outside.

Intertitle: "A canal control station" Close up views of a building on a pontoon on the canalside, flanked by other small huts and low commercial warehouse stores.

Intertitle: 'Bitter Lakes - largest expanse of water in the area" A wide view of the still lake with a boat and several buoys line the canal.

Intertitle: "From Port Said to Suez the journey takes 15 hours" Further views from onboard ship down the length of the canal.

Intertitle: 'Port Said' The ship arrives in Port Said, with it's industrial silo containers, ships and small trade boats in dock. A rowboat approaches the ship with food and supplies. Wider panning views of the port follow showing the larger passenger ships and buildings close by.

Intertitle: At Port Said we see the statue of de Lesseps, founder of the canal" The statue of Ferdinand de Lesseps stands on its plinth on the bank of the canal, as the ship passes through. From the harbour several ships dock that include the "James Stove".

Intertitle: And finally we see typical Arab scenes." A bustling low level town comes in to view, followed by scenes of shelters on the bank facing out toward a large open sea. Returning to open water, the film-maker captures other boats and the waves in the sea. The "Liverpool Pilot" bobs on the water next to the ship. Scenes on board follow showing a group of people on deck.

Back in the UK, contrasting winter scenes open the next section. Snow covers the ground outside a house. A woman dressed in long coat steps out of the house followed by a Jack Russell dog at her heels. Next we see a man dressed in a military uniform walking towards the camera outside the same house. Further shots follow of a snow covered front garden and residential street.