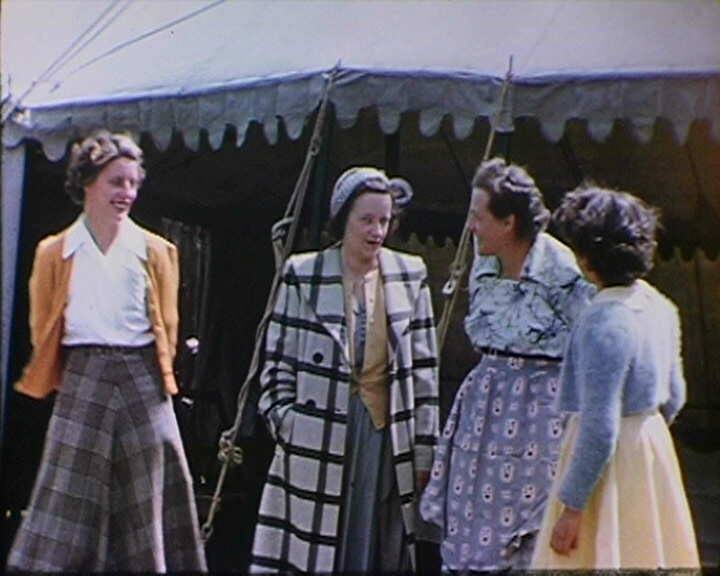 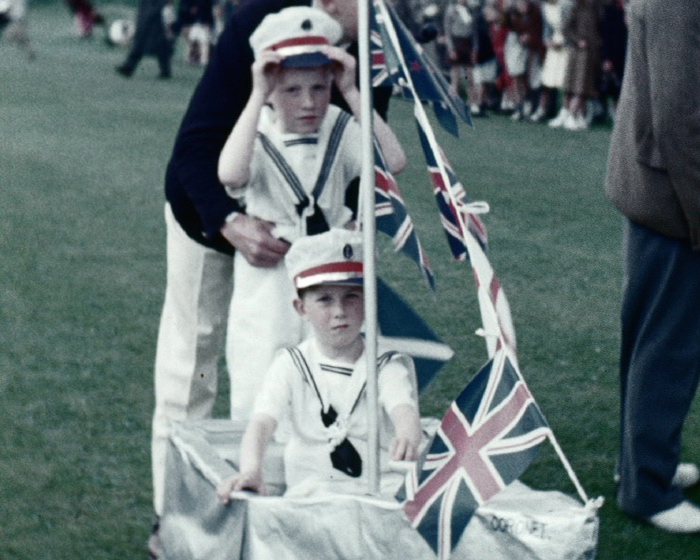 A large banner in the street advertises the Coronation Fete at Horley Cricket Club. Shots of the cricket ground decorated with Union Jacks and flags of St George; tents and marquees have been erected on the grounds. People begin to arrive: “The Organiser - Mr Ron Wilkinson” walks past the camera in his cricket whites. More people arrive at the gate. A ticket to the fete is held up to the camera. General views of the cricket ground before the fete is under way show the tents under stormy skies; men in blazers busy organising and preparing. The events begin with children’s races. A variety of races are shown including girls’ sprint and a boys’ obstacle race. The film then focuses on the sideshows and stalls at the fete. A shot of a tent decorated with bunting and balloons; a man goes inside the tent and pulls out a large bunch of balloons. Another man has a balloon tied to his blazer lapel. A man ties a tag to a balloon then hands it to a woman who lets it go into the sky. There are general views of people walking around the fete, looking at the stalls and sideshows. A boy has a go at the coconut shy, while a man tries his luck trying to knock over bottles on a stand. There are also close-up shots of individuals. Children are given pony rides around the grounds. Four women pose outside the tea tent. The camera continues to focus on the villagers enjoying the fete. In the “Soapbox Derby” children in fancy dress line up with their home-made ‘go-carts’ at the start line; costumes include girls in grass skirts with their grass hut cart, two boys dressed as sailors with a cart decorated as a boat and two boys dressed as bygone cricketers: Elizabethan, L.Hutton and Victorian, W.G.Grace. The race takes place and two boys dressed as a cowboy and Indian are the winners. There are several of close-up shots of some of the fete organisers. Scenes of the bicycle races are followed by close-ups of some of the participants. A large crowd of mothers show off their babies at the “Baby Show”. Inside a marquee a judge makes notes. There is a brief shot of a little boy looking at goldfish in a tank. Back outside, a woman leads a little girl on a horse ride. Further shots of the sideshows include a football penalty game, the coconut shy and a number board with spinning arrow. A couple and a little girl have a cup of tea and a sandwich. Further shots of people enjoying the fete, including ‘organiser - Ron Wilkinson’, and more close-up shots of individuals. The film ends with brief shots of people leaving the fete. 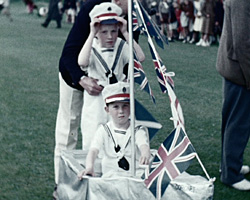 Screen Archive South East houses a large collection of films made by Mr D.J. Church. These include The Plant Department Move to Old Woking (June 1963) which records the relocation of the plant department of the civil engineers contractors William F. Rees and The Kent Show (1951) which tours the Kent County Agricultural Show.

Screen Archive South East also holds other films made by the Haywards Heath Cine Society including Festival of Britain (1951) and A Garden of Beautiful Roses (ca. 1952) which records life in a East Sussex Barnardo's Home.

"The Society was formed in 1951 with the main aim of tracing, recording and disseminating information on all aspects of Horley and its surrounding villages in Surrey." The local history stock of the library has been combined with material held by Horley Local History Society.
http://www.horleyhistory.org.uk/

“The Mass-Observation Archive specialises in material about everyday life in Britain. It contains papers generated by the original Mass-Observation social research organisation (1937 to early 1950s), and newer material collected continuously since 1981.” Of particular relevance to this film would be “ROYALTY 1942-64. By far the largest part of this collection comprises material generated by the Mass-Observation study of the Coronation of Elizabeth II in 1953, although a small amount of material pre-dating and post-dating this event is included. In addition to documents arising from this, and other Mass-Observation surveys, the collection also contains a number of boxes of newspaper cuttings, again, mostly relating to the Coronation of 1953." A search facility is available online.
http://www.sussex.ac.uk/library/massobs/introduction.html

The Surrey History Service collects and preserves archives and printed material relating to all aspects of the history of Surrey. The Centre also has a selection of films from Screen Archive South East, and its collections catalogue is searchable online.
http://new.surreycc.gov.uk/heritage-culture-and-recreation/archives-and-history/surrey-history-centre

Screen Archive South East holds a souvenir programme for the first public show given by Haywards Heath Cine Society, as well as two yearbooks from the 1980s which contain information on the Society's history.

1953 issues of the Amateur Cine World magazine published articles and advice on how the amateur film-maker should go about filming the festivities. Copies of the magazine are held at the British Film Institute National Library in London

This local newspaper, which recorded events at the Horley Coronation Fete, is available at Horley Library.