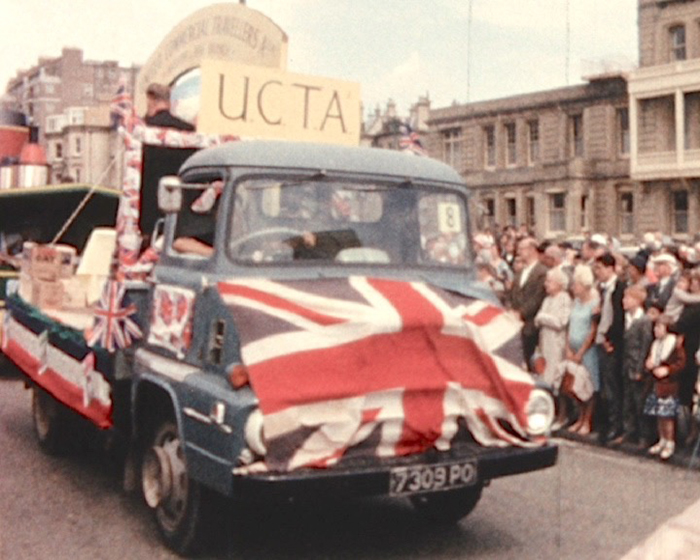 The film opens with views from a car driving into Brighton along the A23, it passes the pylons on the boundary of Brighton. Sign: "Careful Drivers Are Welcome To Brighton"; dark road scenes as the car travels along Preston Road. The film cuts to scenes of the Royal Pavilion and William IV gate; a gardener mows the grass at the Pavilion Gardens. The Kingswest building under construction and brief view along West Street looking north. More views from the car as it travels along Gloucester Place towards St. Peter's Church, past Preston Circus and out of Brighton along London Road. A woman takes photographs at the Rookery Rock Gardens; lots of people wander around looking at the gardens and fish in the pond. The film cuts to scenes near St. Nicholas's Church of the church and graveyard, before returning to the Rookery with views across the suburbs of East Brighton and Preston Park. Hazy scenes of flowers and trees at the Victoria Gardens and the Rose Gardens at Preston Park. Shots of a man at his home behind Queens Road, he attends to the flowers as the camera look on. Now in Hove, the floral clock at Palmeira Square is seen, St. John the Baptist Church can be seen in the distance. The floral clock is planted with a display: "League Champions Congratulations Albion". Scenes of workers and lorries at Findlater Wine Merchants [the bald portly man was about to retire], followed by a cricket match at the county ground in Hove. The Brighton Carnival procession passes along Grand Avenue (?), including various decorated floats and white drey horses belonging to Whitbread brewery. Views from a car traveling along Grand Avenue towards the sea; silhouette of the statue of Queen Victoria; the car turns onto Kingsway towards Brighton. There follows views of the seafront including houses, the bandstand, boating lake, West Pier (dark shots), Palace Pier and Kings Road Arches (filmed from the West Pier)?, with the Kingswest construction site, the Grand Hotel and The Metropole beyond. Sussex Heights can also be seen under construction. At the Brighton Racecourse there are scenes of a race day (dark shots) and views down to the sea from the course. Shaky shots from a car as it travels down Elm Grove, towards St. Peter's Church and The Old Steine. Scenes of a market in Sussex Square and the Jill Windmill at Clayton, as a car travels along the A273. The film ends with scenes from the London to Brighton Vintage Car Rally in Brighton and shots of Hanningtons shop window displays on North Street.