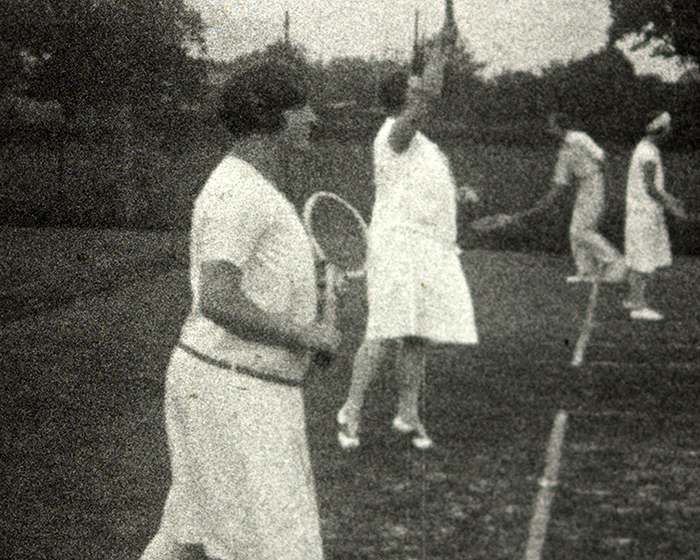 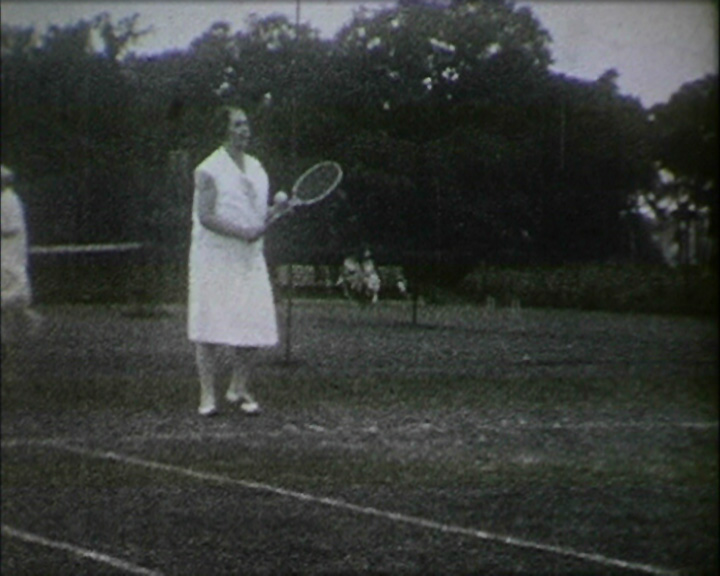 Men wearing suits and hats play bowls on a manicured green whilst women wearing calf-length day clothes play croquet. On the lawn tennis courts, women wearing knee-length white dresses play doubles matches - some serve underarm, others favour the overarm method first seen at Wimbledon in 1901. The camera captures a series of the male participants in close-up and watches as the groundsman pushes a roller over the bowling green. The men continue their informal bowls match in front of the clubhouse. A procession of players are filmed as they roll their bowls - some smoke cigarettes and pipes whilst doing so. The final shot shows four of the players sitting on a bench beside the green. 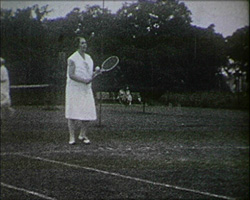 Amateur film-maker Percy Nightingale made films of his family throughout the 1920s and 1930s. Crawley & District Bowling and Lawn Tennis Club (1927 - 1928) shows some of his family enjoying outdoor sports at a local club. Screen Archive South East holds a number of other films made by Percy Nightingale including [Local Scenes and Family Pictures] (1927; 1929) and [Hazeldene Orcchestra]. Golden Wedding Celebrations at Hazeldene (16 June 1931; 23 April 1934). He also filmed at Crawley recreation ground in [Crawley Events] (1928 - 1937) and Opening of Crawley Recreation Ground (1 August 1929) - this appears to be the site of the Crawley & District Bowling and Lawn Tennis Club. And in N.A.C.A.M. Convention in Eastbourne (1928) members of the Nightingale family are filmed playing and watching lawn tennis and golf.

The recreation venue featured in this film - which spans 1927 to 1928 - was probably located in Crawley's Memorial Gardens on the then Three Bridges Road, where a municipal bowling green and adjacent tennis courts were established in the 1920s. An earlier bowling club, formed in 1913, had its green behind the George pub. After Crawley's extensive pre and especially post-war re-development, it is difficult to find traces of the original recreation grounds as seen in the film.

The club featured in the film is an indicator of the population changes which took place in Crawley during the 1920s. The town was becoming increasingly suburbanized, attracting people from the middle-classes who sought homes which were within reach of London yet located in a rural environment. This led to a rapid increase in the amount of new housing built in the town during the inter-war years. It also led to a growth of recreational facilities which served the changing demographic. All of the sports on display in the film were popular pastimes for the middle-class - they had both the finances and the leisure time needed to enjoy them. Local clubs evolved in response to this - they provided their middle-class members with sites of social interaction that promised exclusivity. Screen Archive South East films [Flavell Family. Miscellaneous Family Scenes I] (ca. 1931; July 1938; August 1939), [Ross Family Pictures IV] (mid-1930s) and [Ross Family Pictures VI] (mid-1930s) are comparable amateur films showing other middle-class families enjoying leisure pursuits, including bowls and tennis, during the 1930s. Bowling is also the subject-matter in Hove Bowling Club (ca. 1913) and Bexhill Bowling Club (ca. 1959). The post-war development of Crawley as one of the six original New Towns can be seen in A New Town Story (1955).

It is interesting to note the gender division apparent in the film. Although all three sports were considered appropriate for patronage by women in the 1920s, bowls is seen as an exclusively male pursuit in this film. It could be argued that bowls has a tradition of gender division in England - the English Women's Bowling Association was not formed until 1931, almost thirty years after the English Bowling Association was established. At the same time, lawn tennis was growing in popularity amongst women with stars such as Suzanne Lenglen attracting amateur female players onto the courts.

This book of archive postcards features an aerial view of Crawley taken in 1929, one year after Crawley & District Bowling and Lawn Tennis Club (1927-1928) was filmed - the recreation ground at West Green in the top left of the photograph may have been the site of the Club. Copies are available at various West Sussex libraries.

The West Sussex Record Office (WSRO) houses a collection of photograph albums, loose photographs and documents from the Nightingale family. In addition, the collection includes a CD-Rom which has been created by a relative, detailing the extensive family tree - it includes archive photographs and moving images of the Nightingale family. A copy of the CD-Rom is also available via the Screen Archive South East office, although advance notice would be needed prior to to viewing it.
https://www.westsussex.gov.uk/leisure-recreation-and-community/history-and-heritage/west-sussex-record-office/

An annual handbook which provides details on affiliated bowling clubs, matches and related advertising. Copies of the journal covering the dates 1935-1940 & 1948 are held within the collections of the Brighton History Centre, now at The Keep.
http://www.thekeep.info/brighton-hove/

A member of the English Bowling Association (the governing body for men's outdoor flat green bowling in England).
https://www.bowlsengland.com/