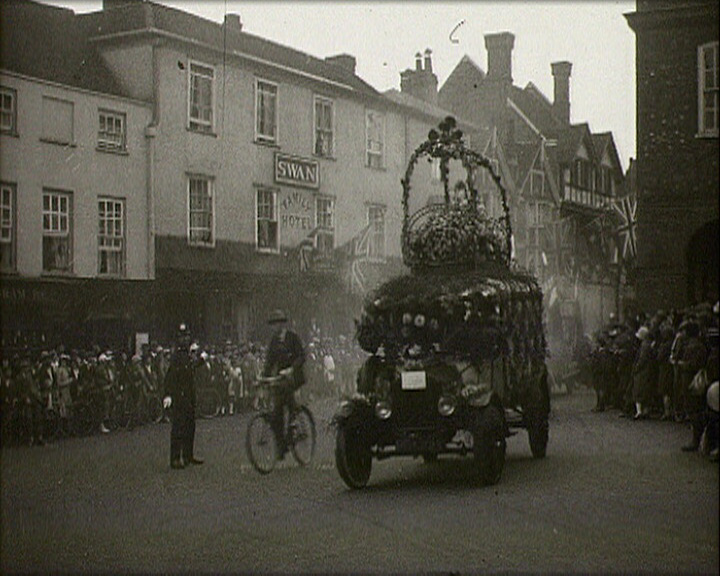 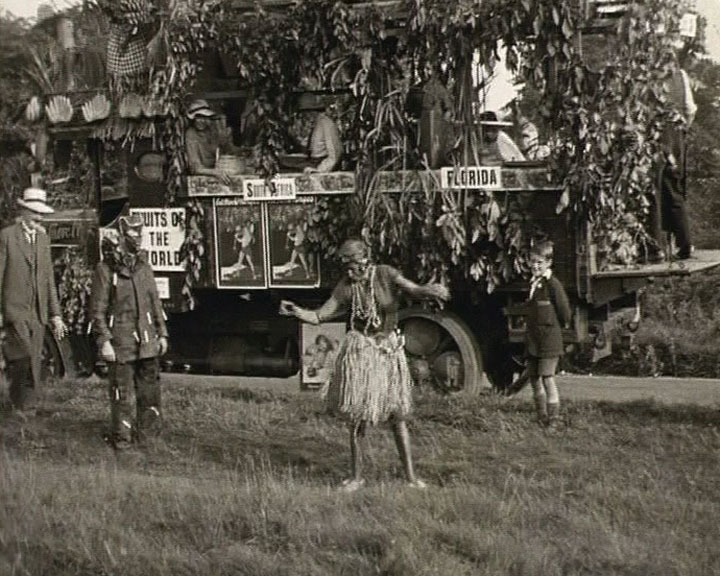 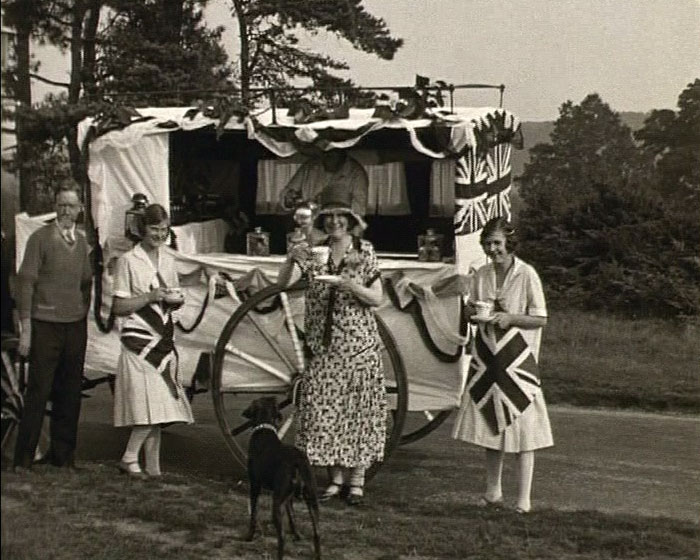 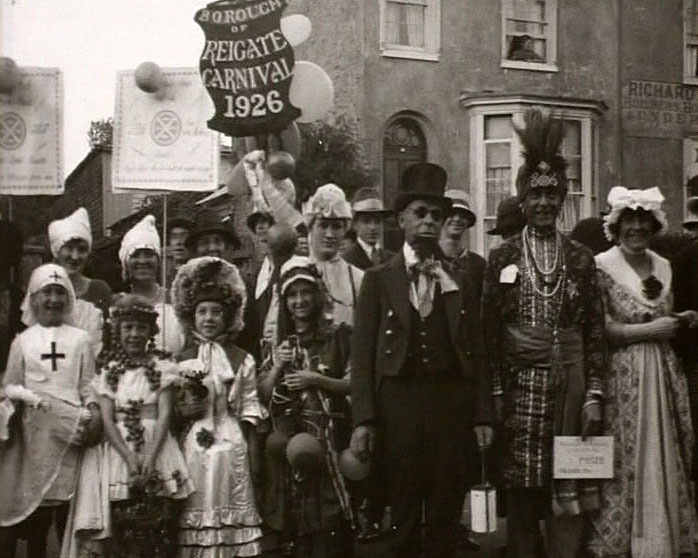 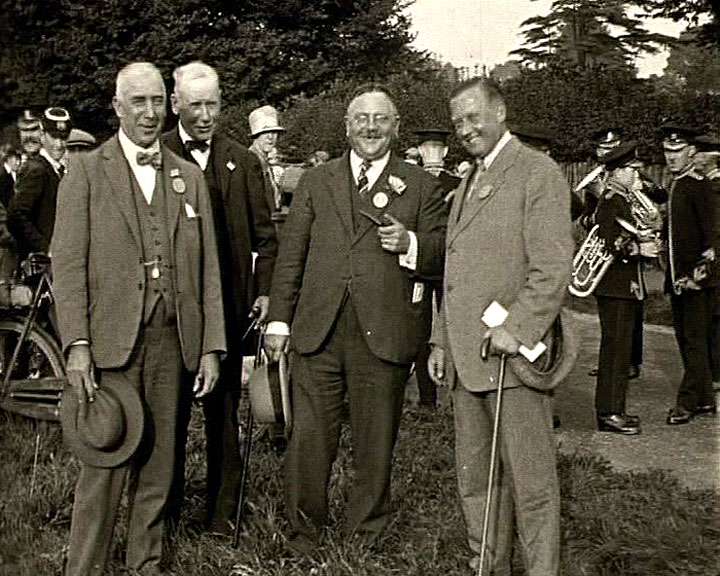 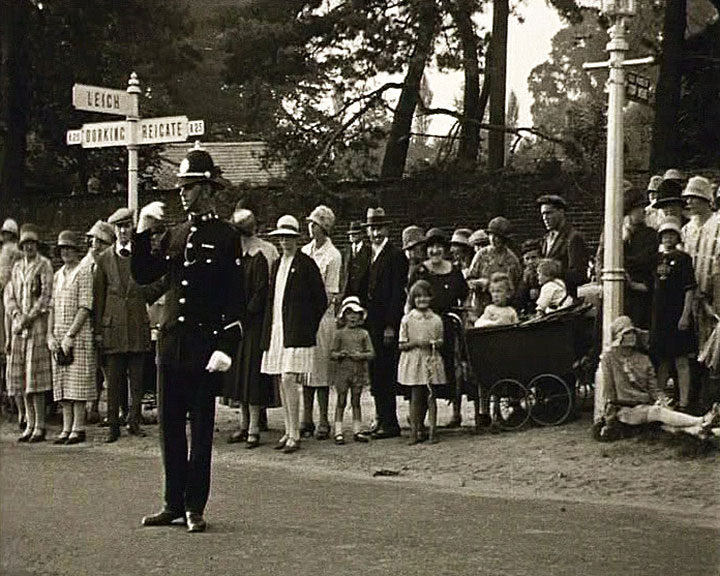 A theatrical curtain opens and closes over the opening titles. Shots of the decorated floats on Reigate Heath before they set off on the parade. A girl in a grass skirt dances for the camera and a group of women on a float dance and play the tambourine. Several of the floats are singled out, themes include Noah’s Ark complete with people in animal costumes, a float decorated with Union Jacks serving cups of tea, a Roman chariot and a float with men drinking large tankards of beer. Several floats are sponsored by charities and local institutions including St John Ambulance, South Park Womens Institute and one float promoting ‘Geranium Day for the Blind’. The floats are a mixture of horse-drawn and motorised vehicles, as well as one being towed by a ‘pantomime’ horse. There is also a shot of both horse-drawn and motorised buses. One car has two large gramophone-type speakers on its roof. Scenes of people in fancy dress, one man has a llama. Further scenes before the procession sets off show a group portrait of four gentlemen in suits, a brass band and crowds lining the streets outside the White Hart Hotel and Barclays Bank. A policeman waves cyclists through the square and cars pass through before the carnival begins. An elevated view shows the carnival procession passing through the town centre; a traffic policeman directs the procession past the Old Town Hall and through the square. A view of the crowds on the street shows people alighting from a bus in the background. The large Roman chariot float goes past followed by a military band.

The second part of the film shows the 1926 Reigate Carnival. Shots of the expectant crowd outside the White Hart Hotel and Knights. People watch from a bus parked up outside the Swan Hotel. Shots of people in fancy dress and costumes on Reigate Heath before the procession sets off. Costumes include nurses, a pearly king, an Indian prince and nursery rhyme characters. One person holds a placard: ‘Borough of Reigate Carnival 1926’. The procession slowly sets off. Cars are decorated as boats and a lighthouse. An intertitle introduces “Two Screen Aspirants”: two carnival-goers ham it up for the camera. A huge Wooden Horse of Troy is pulled along by a tractor; Roman soldiers escort it, waving their swords. Back in the square the crowd awaits. The procession makes its way through the square. A char-a-banc passes by with a band playing on board. Other floats include St John Ambulance, ex-servicemen and the Fire Brigade. The floats are then shown making their return journey, a few people still line the streets. In the evening thousands of couples attend a dance. There are views of the couples dancing and people enjoying themselves. An intertitle reveals the light source: “The source of illumination! 315th Surrey Anti-aircraft Co Royal Engineers”. The final shot shows the soldiers operating the large searchlight. 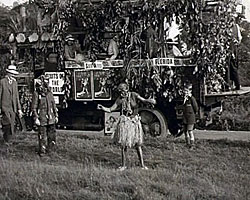 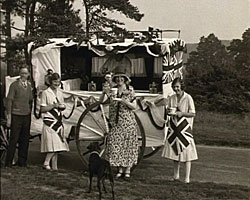 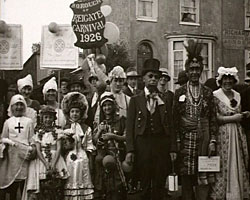 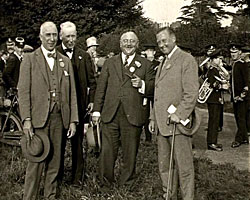 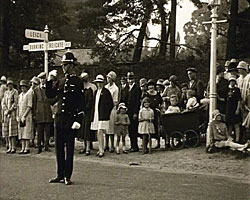 Made by the owner of The Hippodrome Cinema in Redhill, these films would have proved a useful way of drawing audiences into the cinema. Screened alongside commercially-produced newsreel this local event would’ve given people a chance to see themselves, friends and family on the big screen. The Bancrofts also owned the Majestic Cinema in Reigate. The road opposite the site of the Hippodrome is named after them.

The Reigate Carnival was established in 1924 - it was typically held in August or September. In 1926 the carnival comprised a parade - featured in [Reigate Borough Carnival] (1926; 1927) - a speech by the mayor, prizes and a dance at the Reigate Priory Cricket Club. In 1927 the carnival included a parade - featured in [Reigate Borough Carnival] (1926; 1927) - a funfair, a treasure hunt, a motorcycle gymkhana, a Grand Benefit Night and a firework display. The parades traversed a half-mile route from Reigate Heath to West Street, the High Street, Bell Street, Lesbourne Road, Blackborough Road, Shaws Corner, Reigate Road, Croydon Road, Holmesdale Road, the High Street and Park Lane, ending with prize givings for best costumes and floats.

Fashion Notes: The film shows a woman dancing in a grass skirt at the carnival. It conveys an exoticism that is reminiscent of the celebrated performer Josephine Baker who danced in the Parisian nightclub Le Folie Bergère.

The refreshment stall at the carnival conveys the contemporary spirit of patriotism. The women wear union jack aprons and the stall has a row of flags at the front. It is a refreshment stall serving tea, which is promoted as a quintessential British product and pastime.

The fancy dress parade held as part of the Reigate carnival shows an array of costumes, from nurses uniforms, milk maids, male drummers, a woman dressed as a warrior to a person in a wooden beer barrel promoting a particular brand of ale.

Fashion Notes: The film shows a variety of fancy dress costumes such as milkmaids, male drummers and a Pearly King. This film provides a rich example of everyday dress for men, women and children and notably the working classes. Policeman, firemen and nurses are all seen in uniform. A variety of hat styles are depicted throughout the film, especially in the dance scene.

The September 1926, and August & September 1927 editions of the Surrey Mirror and County Post contain advertisements and reviews of the Reigate Carnivals. The newspaper is available on microfilm at the Surrey History Centre

The History of Redhill and Reigate in the County of Surrey

This website, compiled by local historian Alan Moore, provides a richly illustrated history of Reigate. Of particular relevance to the Reigate Borough Carnival films are the old photographs and brief histories of the Hippodrome cinema and the old Market Place/Square.
http://www.redhill-reigate-history.co.uk/

Compiled by Carolyn Burnley, whose father’s 16mm films of Reigate Carnival in the 1920s and 30s are deposited with Screen Archive South East, this website provides a history of Reigate including an article about the town in the 1920s and 30s. There are also many photographs of the town, some are stills from Ms Burnley’s father’s films.
http://www.reigatehistory.co.uk/

This online resource offers pathways into aspects of fashion and dress as depicted in archive film from the inter-war period in the Screen Archive South East collections.
http://screenarchive.brighton.ac.uk/portfolio/screen-search-fashion/