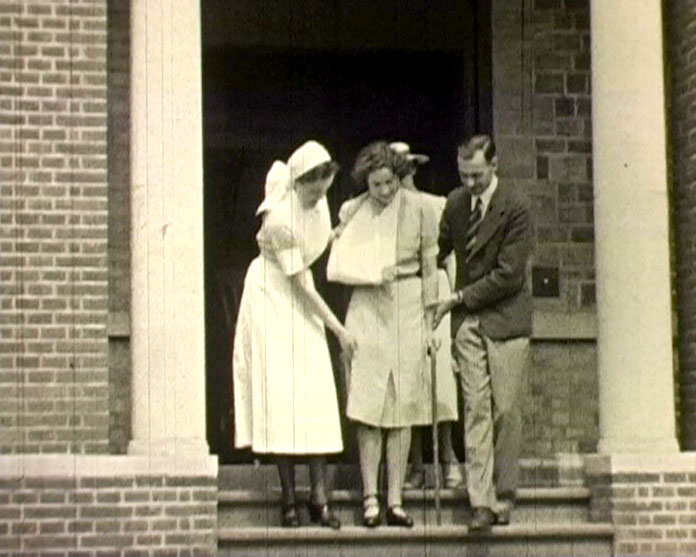 The first film is a drama, entitled 'What the Brownies Saw' and opens with a cast and production list and acknowledgment to the Marguerite School of Dancing (who's pupils play the 'brownies'. The opening scene is set in rural countryside with children dressed as elves (brownies) playing and dancing. A courting couple sit amongst the woodland and kiss, watched by the brownies. The couple get engaged, but whilst cycling in Guildford, the woman has an accident. Her fiancé calls for help and the St. John's ambulance arrives. At the hospital, the woman's leg and arm are bandaged and her leg is put in traction. After her treatment and a stay at the hospital, she goes home. Once fully recovered, whilst out with friends, she notices an appeal in the newspaper for donations to the Royal Surrey County Hospital. She collects donations from her friends and gives them to the hospital. Another grateful patient is seen leaving the hospital and in the hospital's accounts department donations are received. The drama ends with the title "It might have been you".

In a more factual style, a second film goes on to show some of the work of the hospital, illustrate how donations have been put to use and to appeal for further funds. The hospital wards and hospital buildings are shown and the building of a new ward is attributed to "the gift of an anonymous donor". Crowds and dignitaries, including the Duchess of Northumberland, are gathered for the opening of the new ward. The work and costs of the hospital's laundry machines are illustrated, stating that they cost £24.0s.0p per week to run. The furnaces are revealed to use 225 tons of coal each year. New nurses quarters are shown being built and nurses shown attending a training school. They having lessons on anatomy and are shown how to make beds. The nurses rest room is seen, followed by a group shot of the matron and her nursing staff outside the hospital. Another ward is shown and patients from the children's ward are wheeled outside in their beds and lined up in the open air. A baby smiles and two children play with toy vehicles. The film ends with scenes from a fundraising carnival procession with floats, including one for the Hospital League of Friends; followed by a fireworks display.

Built as a voluntary hospital, the Royal Surrey County Hospital first opened in Farnham Road Guildford, in April 1866. Hospital Management Committee documents, held at the Surrey History Centre, reveal that Frank W Allwright (credited on this film as the story writer) was a professional appeal organiser who arranged events to raise funds for the hospital.

The hospital's documents also reveal that an anonymous gift of £1000 was donated to build the new ward and appeals were needed to increase the annual income of the hospital. Later documents record tenders for building work and a Buildings Sub-Committee was established. Fundraising activities were varied, culminating in the carnival and official opening of the new Ava Ward featured in this film on 13 June 1936.

The hospital was absorbed into the NHS administration in 1948. A new building for the Royal Surrey County Hospital was built on a different site in the 1980s and the original Farnham Road site remains an NHS building.

The Surrey History Service collects and preserves archives and printed material relating to all aspects of the history of Surrey. The Centre also holds copies of a selection of films from the South East Film and Video Archive, and its collections catalogue is searchable online.
http://new.surreycc.gov.uk/heritage-culture-and-recreation/archives-and-history/surrey-history-centre