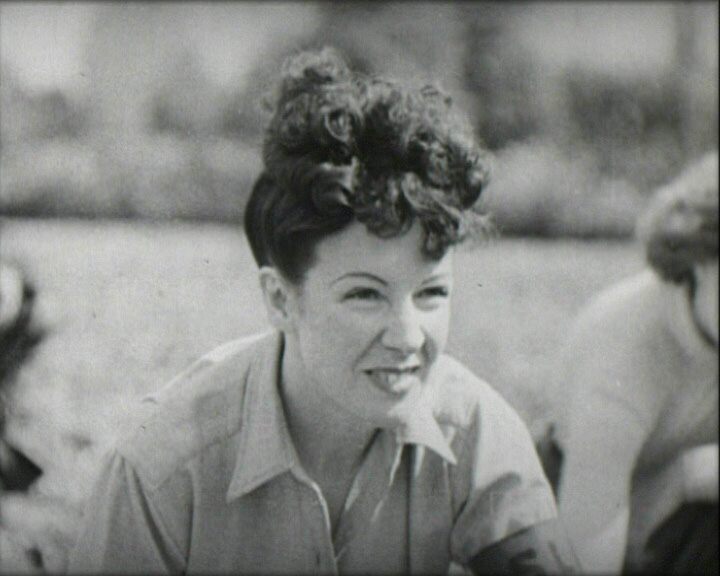 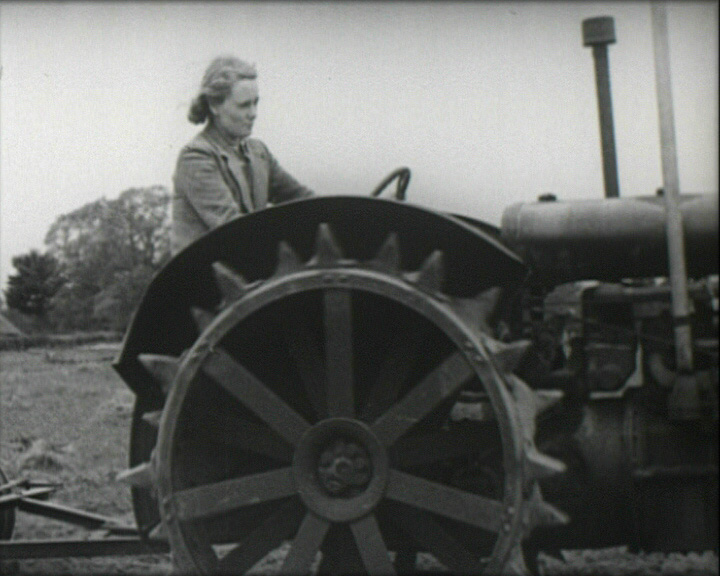 The film opens with shots of men and women labouring in a field while the farmer’s narration explains the concept behind the Land Clubs. Focusing on individuals in the club the farmer explains that the volunteers have full-time jobs during the week but offer their time and labour at weekends on the farm. Further scenes of the ‘gang’ shows them planting potatoes, hoeing, driving tractors and sowing seeds - workers include Miss Johnson and Miss Williams. There is also a close-up of a Surrey Land Club armband worn by one of the volunteers. A dramatisation of a meeting where the distribution of labour is organised follows. The organising committee, including Miss M J Carter, are shown sitting around a table, the farmer telephones to request help on his farm at the weekend. The committee members delegate volunteers to each farm requesting help. Gangs of volunteers are then shown reporting for duty on the farm. Further scenes show the volunteers at work in the field. The farmer, Mr Baker, then makes a direct plea to the viewer, urging people to contact their County War Agricultural Committee for advice on how to start a Land Club. 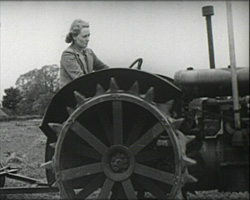 The film’s director andrew Buchanan, was involved in the production of many films for the Ministry Of Information (MOI) and Central Office of Information (COI). This is a fairly typical example of the sort of films made during the war by the government to encourage people to sign up for voluntary work or to play their part in some way on the home front.
The Land Clubs differed slightly from the Land Army in that the Clubs provided farmers with ‘unskilled’ labour primarily at weekends; the volunteers often being in full-time employment during the week. A ‘gang leader’ would be responsible for organising the distribution of labour, collecting the wages, paying members expenses and forwarding any surplus to the Treasurer. In the case of the Surrey Land Club, profits were donated to the Red Cross Agricultural Fund.

The film’s Associate Producer, Edgar Anstey, made many films for the MOI and COI. He was a protégé of John Grierson, a co-founder of British Transport Films and an Oscar winner.

Director Andrew Buchanan also had a strong interest in the amateur film-making movement; he regularly contributed to Amateur Cine World and was a resident judge for the magazine’s “Ten Best” competition.

The Surrey Land Clubs were founded on 13 June 1940 by Miss M J Carter of Surbiton, who acted as their organiser throughout the War. Miss Carter, who worked for Surrey County Council as Poultry Instructor, based her organisation on the Altrincham and Cheshire Voluntary Land Club, featured in the BBC Radio Programme 'Backs to the Land' , broadcast on Saturday 1 July 1940. The clubs were open to all Surrey residents over 17 years of age and aimed to help local farmers and market gardeners by providing weekend and some evening labour. Two ‘camps’ were run at Shere and Chertsey and ‘gangs’ (consisting of mainly office workers) worked in teams of 6 or 8. Jobs were allotted and organised on a weekly basis by the Executive Committee. Farmers were asked to pay ‘unskilled rates’ for the labour to the Land Club which then covered members’ travel expenses; any annual profits were passed to the Red Cross. In 1942, a separate branch of Land Clubs for southern Surrey was formed.

In addition to its permanent exhibits, the museum’s collections include Film and Video, Photographs, Sound, Art, Documents and Printed Books. The Film and Video Archive holds many Ministry of Information and government-commissioned films. The collections’ database is searchable online.
http://www.iwm.org.uk/collections-research

“The Mass-Observation Archive specialises in material about everyday life in Britain. It contains papers generated by the original Mass-Observation social research organisation (1937 to early 1950s), and newer material collected continuously since 1981.” Documents relating to the Home Front during the Second World War would be of particular relevance to this film, as well as the following: “FILMS 1937-48: This large collection is primarily one of descriptions of individual films shown over the period, observations and interviews on their public reception. Many of these films were Government information 'shorts': Mass-Observation analyses were summarised and presented to the Ministry of Information as File Reports.” A search facility is available online.
http://www.massobs.org.uk/index.htm

The Museum of English Rural Life at the University of Reading houses collections which include items relating to the voluntary farm work from both world wars. The Museum’s database is searchable online.
http://www.reading.ac.uk/merl/

The Surrey History Service collects and preserves archives and printed material relating to all aspects of the history of Surrey. Many items belonging to Miss M J Carter, leader of the Surrey Land Club, were deposited at the Surrey Record Office upon her death in 1982. The items include photographs, press cuttings, stationery samples such as a gang leader’s log sheet and work notification card, and a file of papers which includes minutes of meetings, posters advertising the clubs and transcripts or drafts of radio broadcasts. The Centre also has a selection of films from the South East Film and Video Archive, and its collections catalogue is searchable online.
http://new.surreycc.gov.uk/heritage-culture-and-recreation/archives-and-history/surrey-history-centre