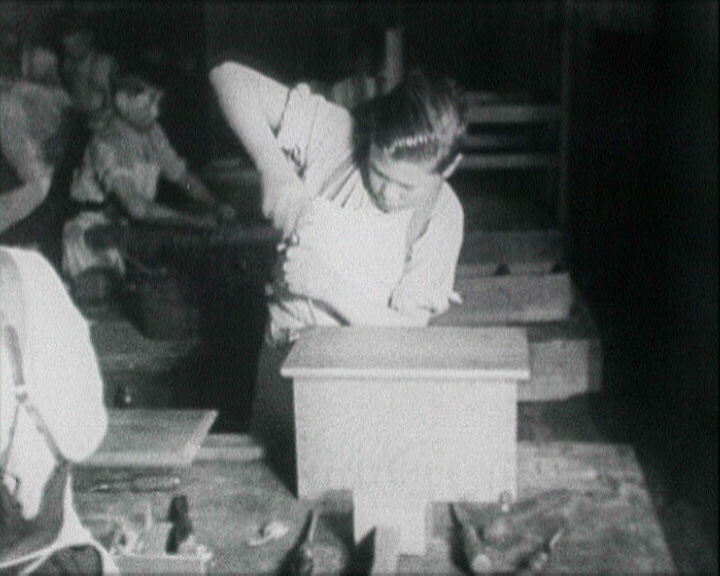 The film opens with exterior shots of the buildings and grounds which comprise the Southern Railway Servants' Orphanage. Waterloo Bessie, a dog who helps to collect contributions for the orphanage (primarily at Waterloo Station), is filmed in close-up before being seen leading a church parade of marching bands, local people and banners. Laundry workers and auditors work behind the scenes whilst the orphans study in the library, practice needlework and woodwork, and display their bathroom washing techniques for the camera. A child's leaving outfit is laid out on a table, ready for collection.

Mothers walk to the orphanage for their monthly visit. Guests pose for the camera at a New Year's party. The foundation stone is laid for the new hospital block - a service of dedication is performed at its opening in 1930. Sports Day (?) sees the children riding aboard a train of the Southern Miniature Railway, and competing against each other in egg-and-spoon races, three-legged races and a tug-of-war battle. The winning children collect their prizes after the mothers and staff compete in their own running races.

"A Pageant of Empire"

"Given by the children on Empire Day 1933". The children perform an Empire Day Pageant. Groups of the children are in Scout and Guide uniforms. A girl dressed as Britannia is escorted on to a stage by a man dressed in an costume resembling Sir Walter Raleigh. The various scout and guide groups carry banners and wear costumes representing their interpretation of countries of the Empire including Canada, New Zealand, South Africa, Australia, West Indies. Some are wearing 'black face and body makeup' to represent the Caribbean and African States.

The production context of The Southern Railway Servants' Orphanage at Woking (1928 - 1933?) is unknown but it may have been made to publicize the workings of the Southern Railway Servants' Orphanage, a charitable body dependent upon voluntary contributions. The generous screentime afforded images of local guests and events (notably the church parade and the opening of the hospital block) suggests that the film would have been screened locally to an audience of (potential) donors. It portrays the Orphanage in a positive light, showing studious, well-clothed children whose lives were brimming with fun and inclusive events such as a sports day and an Empire Day Pageant.

The history of the Southern Railway Servants' Orphanage dates back to 1885 when Canon Allen Edwards, supported by the workers of the London and South Western Railway, opened an orphanage in Clapham for the offspring of railwaymen. The institution moved to the 9 acre Woking site in 1909 - a £24,000 budget provided a home for 150 fatherless children. In the 1920s the Orphanage was opened up to children from across the Southern Railway. The building of a hospital block in 1930 was followed by a new accommodation wing in 1935 housing a further 90 children. During the Second World War the whole site was commandeered for a hospital, reverting back to an orphanage in 1946. Missenden House opened its doors to the elderly in 1947 - it was located on part of the Woking site and supported former employees of the Southern Railway. In the 1960s the site became known as the Southern Railwaymen's Home for Children and Old People - today it is called Woking Grange and is part of Woking Homes which caters solely for retired railway and transport personnel and their spouses.

The Southern Railway Servants' Orphanage initially accepted children over the age of 6 who had lost their railwaymen fathers. Many were not orphans however - financial concerns forced the mothers to choose an orphanage upbringing for their children. As seen in The Southern Railway Servants' Orphanage (1928 - 1933?) mothers would visit their children at the Orphanage but this could be as infrequent as once a month. Typically, the children remained at the Orphanage until the age of 14 (later 16), leaving the institution with a hand-picked outfit and a guarantee of welfare support until the age of 21. The Orphanage was primarily funded through voluntary contributions, the bulk of which came from the employees of the Southern Railway. It also called upon the public to donate at Flag Days and at railway stations where dogs with collecting boxes publicized its work.

The Screen Archive South East film [Children's Society Home] (ca. 1952) looks at The Children's Society's homes for disadvantaged and vulnerable children; Beyond All Time (ca. 1963) films life at Reedham School (formerly Reedham Orphanage) in Purley, Surrey; and Fellowship of St. Nicholas Homes for Children, Christ Church, St. Leonards-on-Sea (1940s) records some of the work being undertaken by a local charity.. In addition God Speaks Today. Part III. The George Müller Story (1960s) offers a dramatised story of George Müller, an English evangelist and philanthropist who built orphanages in the latter half of the 19th century.

This booklet relates the stories of the dogs who collected money for the orphaned children of railwaymen from 1881 to the 1960s. A copy of the booklet is held at the Surrey History Centre.

Copies of this book, which contains reference to the Southern Railway Servants' Orphanage, are available at various Surrey libraries.

This autobiography recalls childhood memories of life at a Surrey orphanage. Copies of the book are held at various Surrey libraries.

"The National Railway Museum in York...is the largest railway museum in the world, responsible for the conservation and interpretation of the British national collection of historically significant railway vehicles and other artefacts. The Museum contains an unrivalled collection of locomotives, rolling stock, railway equipment, documents and records." The Museum also houses paper and photographic collections relating to the Southern Railway Servants' Orphanage. The museum's database is searchable online.
http://www.nrm.org.uk

The Surrey History Centre (SHC) at Woking collects and preserves archives and printed material relating to all aspects of the history of Surrey. The SHC holds several collections pertaining to the Southern Railway Servants' Orphanage including publicity brochures from the 1930s, postcards and articles, and newsletters of the Southern Railway Servants' Orphanage Reunion Association. The SHC collections catalogue is searchable online.
http://new.surreycc.gov.uk/heritage-culture-and-recreation/archives-and-history/surrey-history-centre

"Woking Galleries provides community access to its heritage and the visual arts, to stimulate creativity, learning, understanding and enjoyment." It also holds ephemera and an oral history tape relating to the Southern Railway Servants' Orphanage.
http://www.woking.gov.uk/woking/galleries

This Gaumont Graphic newsreel item shows children from the London and South West Orphanage (renamed the Southern Railway Servants' Orphanage) being entertained by a magician and ventriloquist at a mosque in Woking. The film is held at the ITN Archive (ITN Source) and is searchable via the database of The British Universities Film and Video Council.
http://bufvc.ac.uk/newsonscreen/search/index.php/story/78576
http://www.itnsource.com/en/shotlist/RTV/1921/09/03/BGT407060654/?s=ndian%20Hosts.%20Children%20of%20L%20and%20SW%20Railways%20Orphanage%20Entertained%20at%20Woking%20Mosque

This newsreel item offers, "a look at life at the Southern Railway Children's Home in Woking, Surrey." The film can be accessed via the British Pathé Website.
http://www.britishpathe.com/

This website contains a history of Woking Grange (formerly the Southern Railway Servants' Orphanage) and runs a contact service for old boys and girls.
http://www.wokinggrange.co.uk

This is the website for Woking Homes, "a Residential Home for the elderly, who have railway or other transport related backgrounds, or their spouses." Woking Homes is on the site formally occupied by the Southern Railway Servants' Orphanage and it holds an archive of registers, photographs, etc from the Orphanage.
http://www.woking-homes.co.uk/