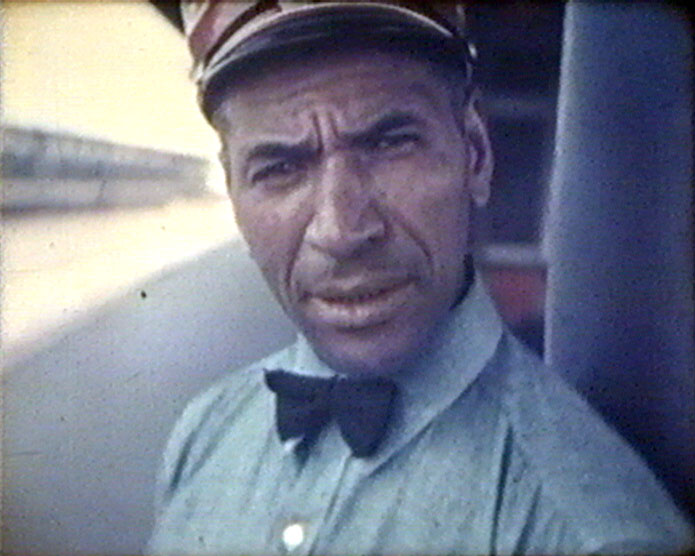 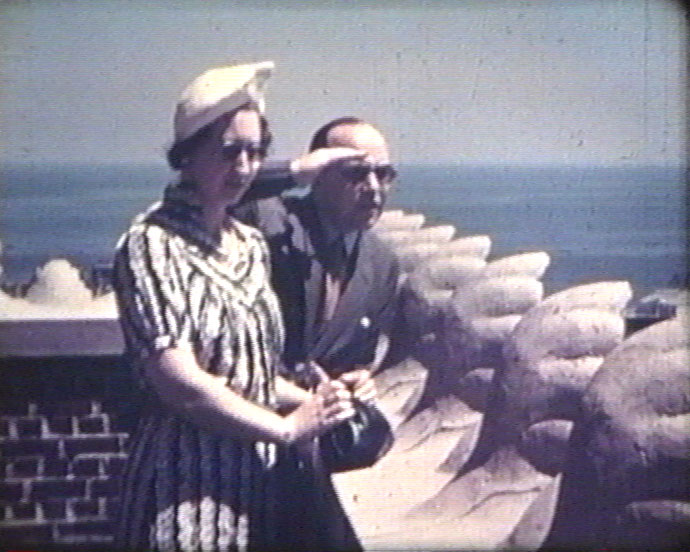 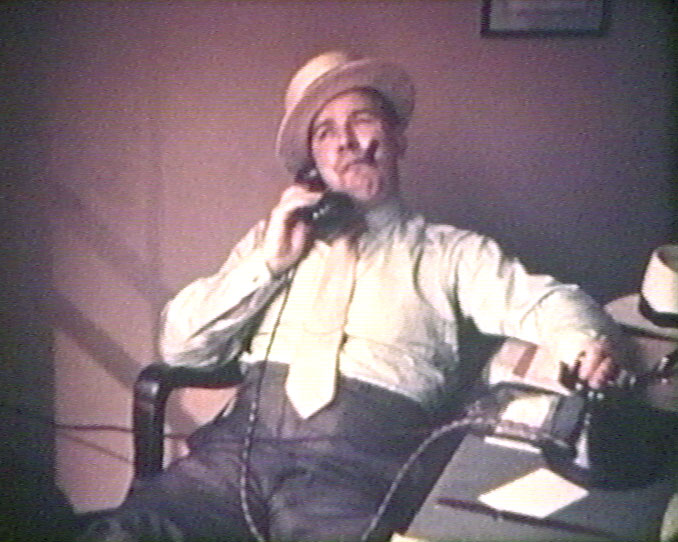 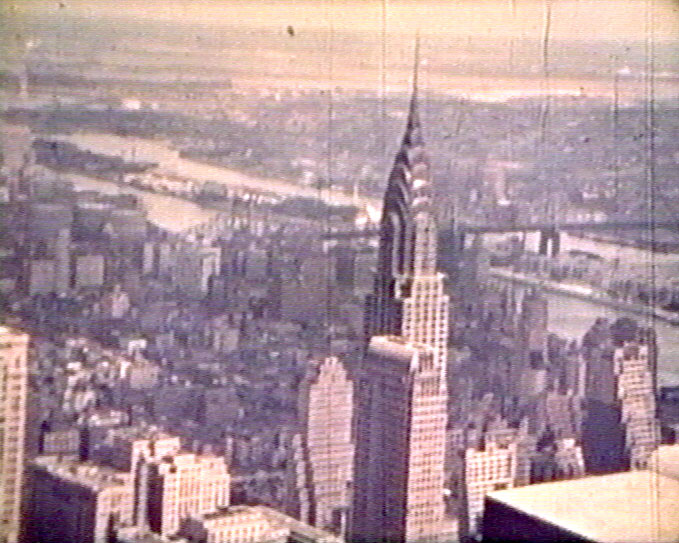 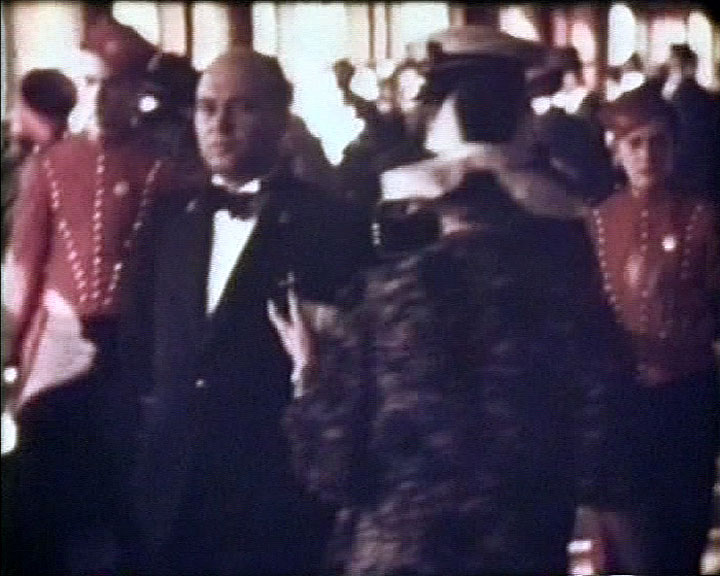 The film begins with the title 'American Visit' and shows the departure from the Solent, bound for New York aboard the cruise liner Normandie. On board the ship, Emberton's camera captures the passengers sunbathing, sitting in deck chairs, games on deck, views of the sea and some of the interior of the ship. Also captured on film on board the ship, is Hollywood star Madeleine Carroll.

The ship's arrival in New York reveals a misty Manhattan skyline. After disembarking at the quay, the camera takes in views of streets and buildings in New York, and the group's arrival at the Waldorf Astoria Hotel. During their stay in New York, Emberton films a car journey across the George Washington Bridge, a performance of the Rockettes at Radio City Music Hall and views from the Empire State Building. The camera lingers on the architecture and streets of New York from above and from street level. Along with buildings, the filming takes in shoppers, taxis, streetcars, and sculpture at the Rockefeller Center.

On a research trip to Coney Island, the group visit the amusement park and film some of the fun fair rides. A train journey to Atlantic City, New Jersey follows, showing Mr and Mrs Thompson eating a meal on the train. At Atlantic City, the camera again focuses on the buildings and skyline from the rooftops. The Thompson's take a ride in a pushcart on the boardwalk and have a drink from a stall. Mr Emberton's camera focuses specifically on some of the black people on the beach front and shows the segregated beaches. The day on the seafront concludes with scenes of an acrobat entertainer and crabs caught from the pier.

In the hotel, Mr Thompson performs an "impression of an American business man", on the phone wearing a straw boater and smoking a cigar. With some other men, there is a brief enactment of an award ceremony, with a silver cup presented to Mr Thompson.

Back in New York, they board the Queen Mary cruise ship for their return journey to the UK. After the crowds wave the ship off, the camera captures final scenes of the New York skyline and Statue of Liberty. On board the ship, the crew and passengers are observed on deck; passengers play deck games, a girl is caught on camera flirting with a sailor, a boxing match takes place, and sunbathers lie on the deck.

On arrival at Southampton, there are final scenes of ships in the Solent including the Calshot Spit Lightship and seaplanes. 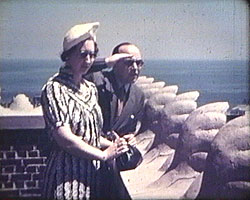 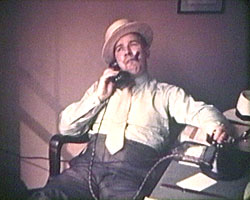 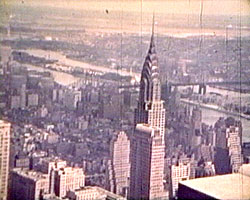 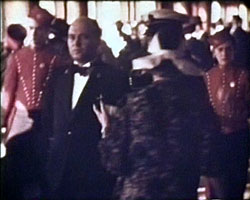 Joseph Emberton was a noted British architect, responsible for some of the defining modernist buildings of the 1930s. His designs included the Empire Hall, Olympia; Simpsons of Piccadilly as well as the Casino and rides at Blackpool’s Pleasure Beach. Emberton's work had been included in the MOMA exhibition 'Modern Architecture in England' in 1937.

Joseph Emberton traveled to New York with Leonard and Doris Thompson, who were the owners of Blackpool Pleasure Beach and had commissioned him to design the Casino building (built 1937/8) and various rides including the Grand National roller coaster and the Fun House (built 1934/5). The Thompson's visit with him to New York was a research trip, with the aim of looking specifically at the Cony Island amusements. Doris' father, the founder of Blackpool Pleasure Beach, had originally modeled it as an "American style amusement park" and is reported to have been strongly influenced by the amusement park at Cony Island as his inspiration for establishing the Pleasure Beach.

Emberton's work and the business nature of this trip is evident in his filming of New York - suffused with images of the buildings and the landscape of the city, his architectural interest showing itself through lingering shots of the skyscraper buildings and streets of Manhattan.

On their visit, the group take in some of the relatively new architecture and attractions of the city in this era. The group's trip includes a drive across the George Washington Bridge (opened in 1931); a visit to the Rockefeller Center (constructed between 1931 and 1940), filming its Art Deco sculptures and statues; they go to see the Rockettes (who first performed in Radio City Music Hall in 1932); and return to the UK on the Queen Mary (who's first journey between New York and Southampton commenced in 1936). On the group's visit to the amusements at Coney Island, the camera focuses on the features of the amusement park and its funfair rides.

Emberton's films also appear to indicate a fascination with the differences in the people encountered on the group's trip. Here, his is camera often lingers purposefully on the faces of Black people walking by, working at the hotels or on the trains. At one point, Mr Thompson lampoons the stereotypical American business man on camera. The film also records scenes of the segregated bathers on the beaches of Atlantic city.

This trip to New York, was one of many of Joseph Emberton's travels abroad captured on film in the years before the Second World War. Other trips filmed by him include a cruise with his wife to Morocco in 1935 [Christmas Cruise - Trip to Africa], trips sailing around the Baltic Islands in 1936, and various visits to mainland Europe between 1937 and 1939. Many of his films, however, focus strongly on family life, observing his daughters Jocelyn and Gillian in their early years and their family home in Croydon, Surrey. The film [At the Seaside] (ca. 1935) shows the Emberton family relaxing on holiday in Cornwall as well as showing scenes at Blackpool of the newly built Fun House and other Emberton designed buildings at the Pleasure Beach. In another film Joce and Gill at Home (1936 - 1940), the family visit the Pleasure Beach in 1939 and the film captures images of Emberton's newly built Casino building.

Fashion Notes: The film shows a variety of leisure clothing worn onboard the ship, including a navy blue jumpsuit. The film depicts crowd scenes, many women wear printed summer dresses, which is replicated in the street scenes of New York City. The ship’s bellboys are also seen in uniform.

The Surrey History Service collects and preserves archives and printed material relating to all aspects of the history of Surrey. The Centre also has a selection of films from the South East Film and Video Archive, including examples of the Emberton collection. The Centre's index and collections catalogue are available to search online.
http://new.surreycc.gov.uk/heritage-culture-and-recreation/archives-and-history/surrey-history-centre

"One of the world's most extensive built environment portals, all courtesy of the Royal Institute of British Architects". The site contains links to information and images on all aspects of architecture, including links on Joseph Emberton and his buildings.
http://www.architecture.com/Explore/Home.aspx

The Design Archive, at the University of Brighton, holds an extensive collection of material relating to Joseph Emberton's architectural career. The collection "consists of several hundred items, including photography, news cuttings and correspondence".
http://arts.brighton.ac.uk/collections/design-archives/archives/joseph-emberton-archive2

This website, constructed by a relative of Joseph Emberton, provides some background information on the architect and his family. The site also provides some information on Emberton's most prominent buildings and his place in the history of modern movement architecture
http://www.joseph-emberton.co.uk/