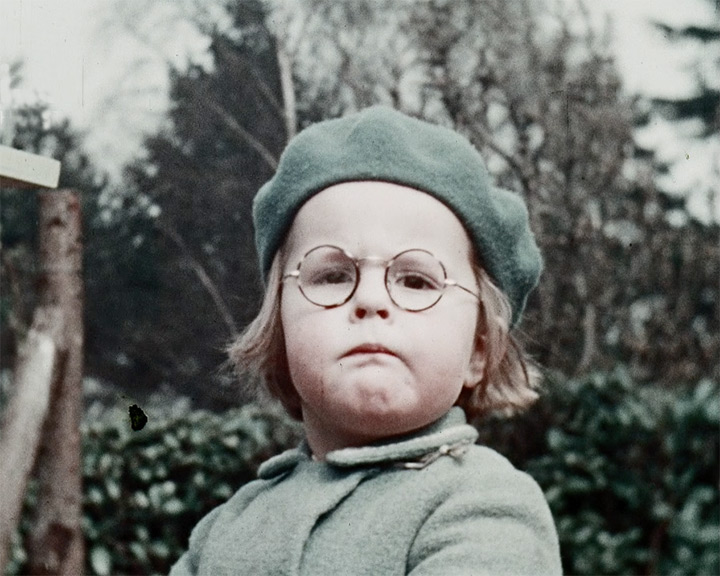 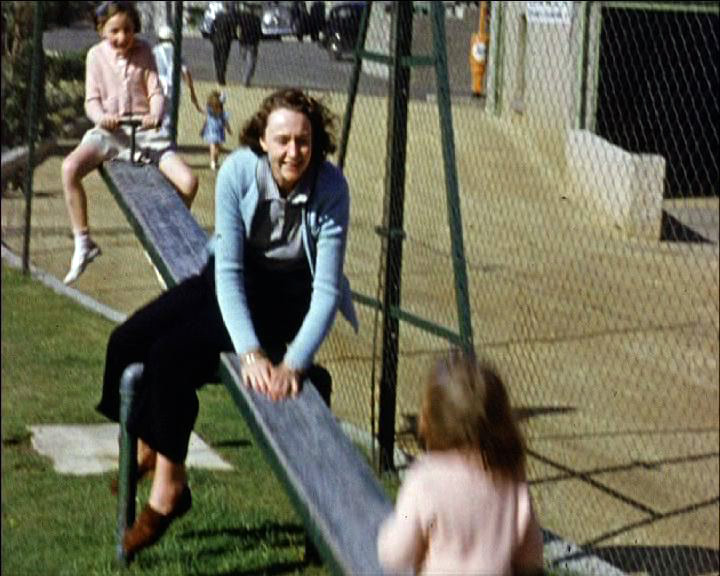 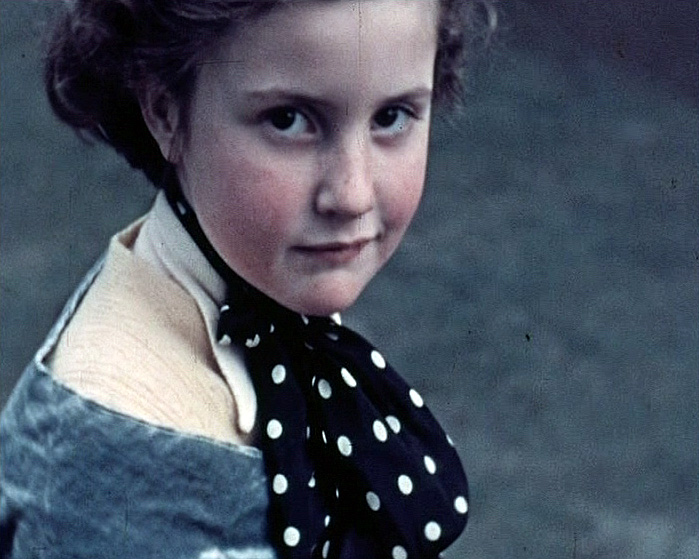 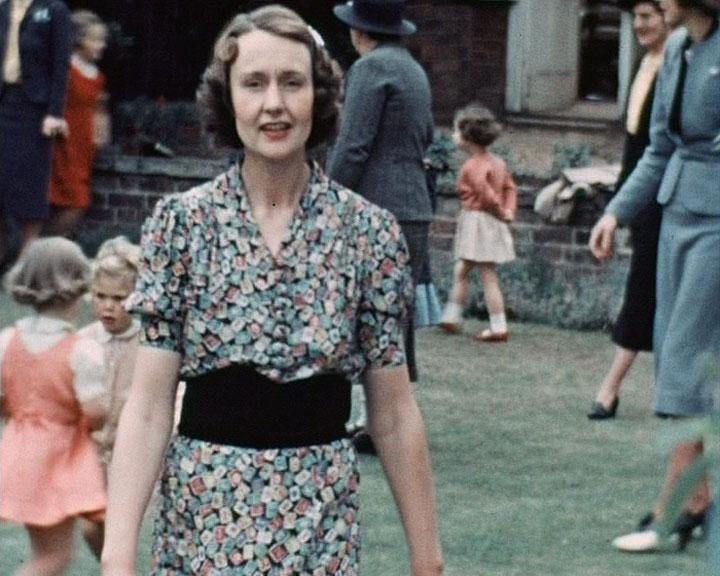 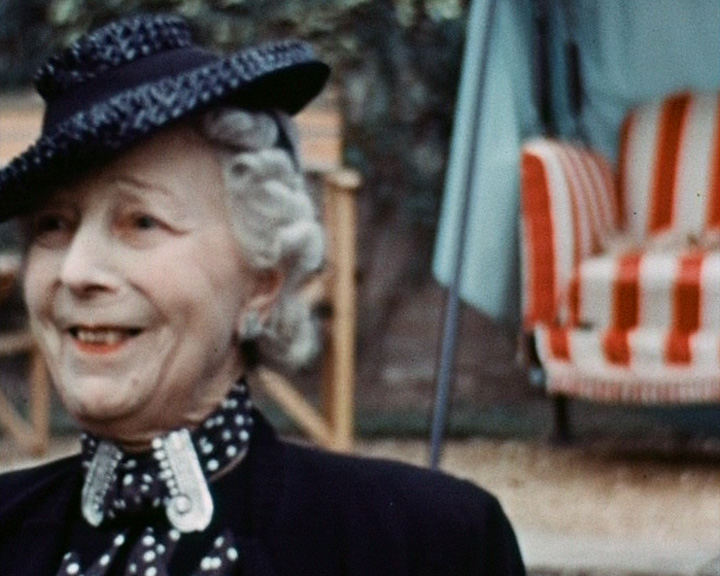 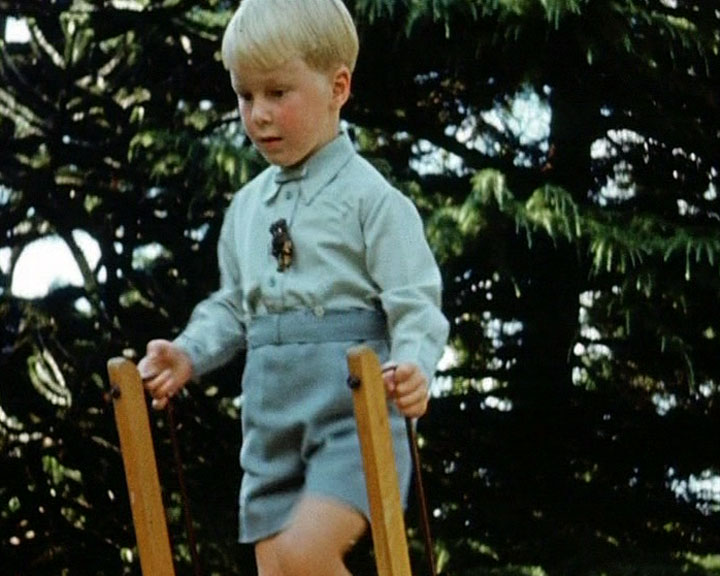 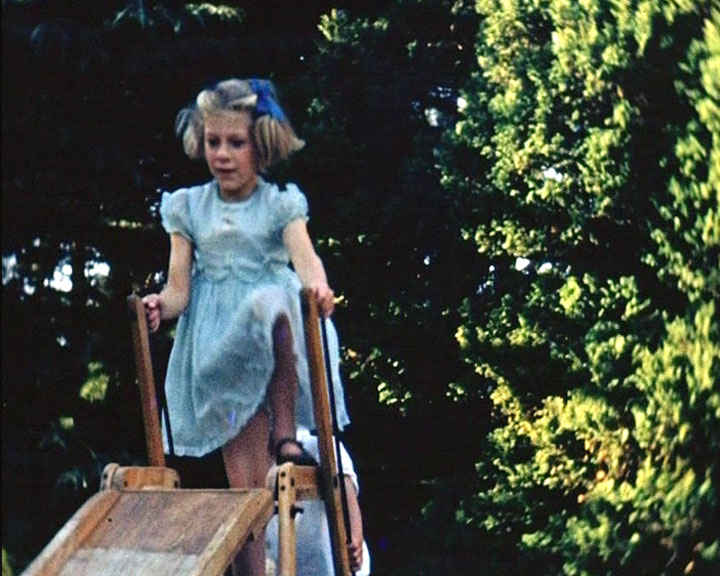 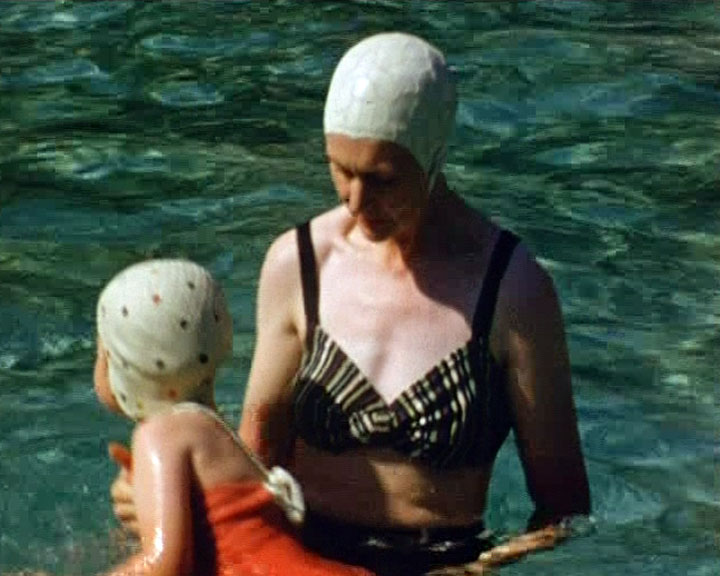 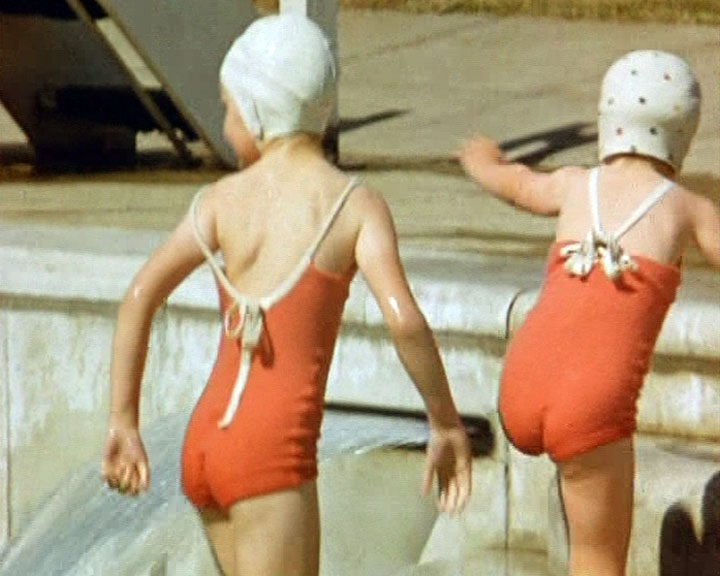 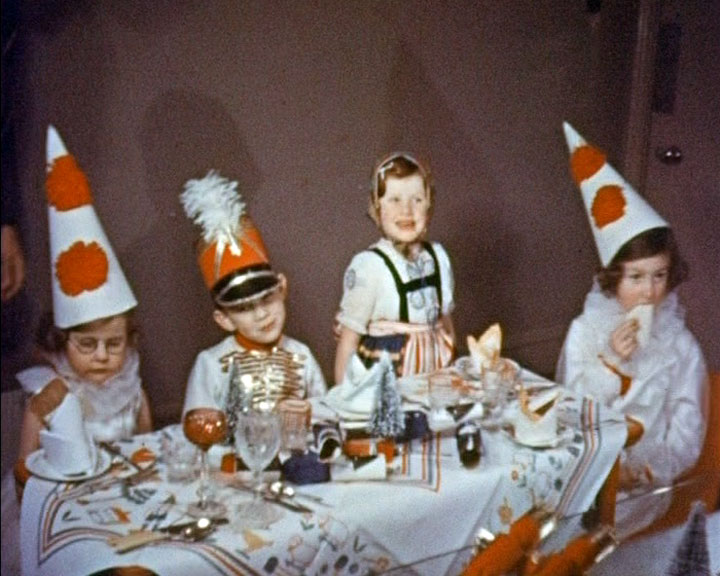 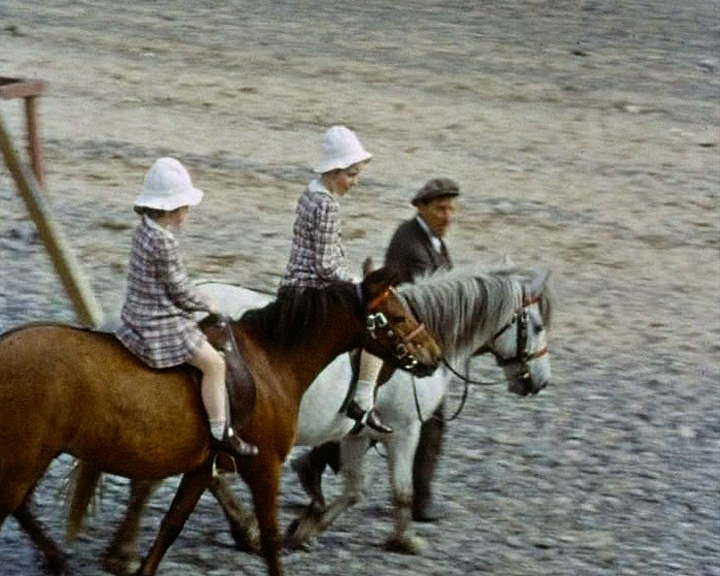 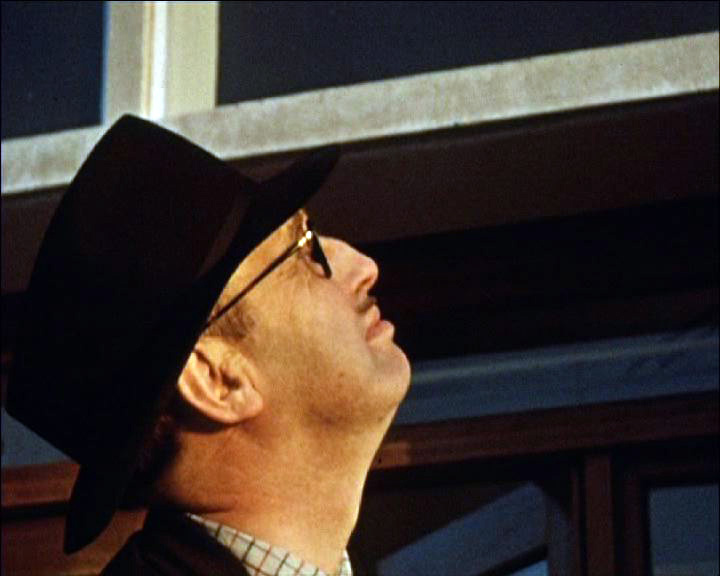 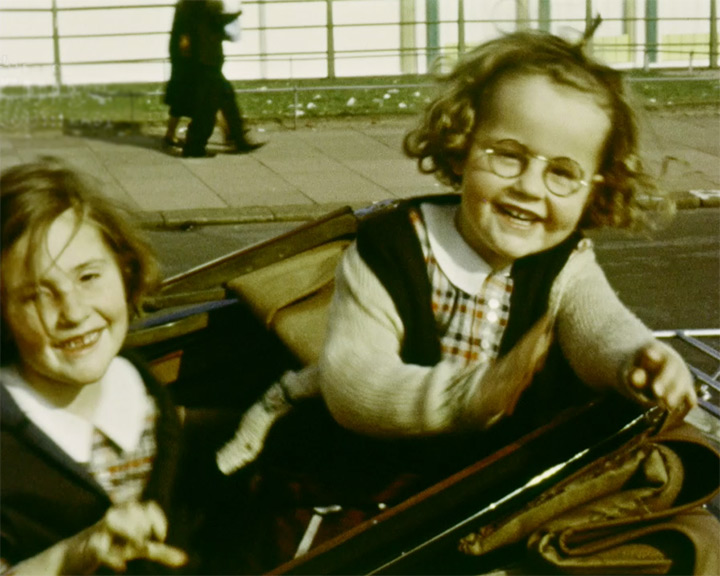 The film opens with the titles 'Joce and Gill at Home' 'Photographed by Joseph Emberton'. The first scenes show the youngest daughter, Gillian learning to walk, whilst sister, Jocelyn looks on. The family and their nanny visit an outdoor swimming pool. The Grandparents pay a visit to the house, arriving in their Rolls Royce. The Grandparents join the family in the garden for lemonade and a meal on the terrace. After this, the girls ride around the garden on bicycles and the nanny gives Gillian some medicine.

Outside a Swimming Pool building, the girls play with their mother on a seesaw. Jocelyn sits on a bench with a nurse, whilst her mother, grandparents and younger sister sit on another bench. Gillian is then seen feeding a pony. Mrs Emberton and the girls are filmed at a picnic table - Gillian drinks from a glass bottle. The two sisters then dress up and parade around the garden with parasols. Still in costume, Jocelyn rides around the garden on her bike. The sisters are then shown picking flowers in the garden.

Jocelyn celebrates her 7th birthday party in 1939. She has a birthday cake topped with cherries. The children at her party play games in the garden, play on a slide and boys sit in a teepee. At a lido again, Gillian learns to swim with the help of her mother.

The film then goes back to Christmas 1938. The garden is full of snow and the girls unwrap their presents in bed. The Christmas dinner is served and the children, in fancy dress costumes, sit at a separate table. The adults carve the turkey and serve Christmas pudding. Empty champagne bottles sit on the table; some of the adults wear paper hats. There is a brief shot of Gillian standing on the table pretending to drink from a champagne bottle. The girls then go for a walk in the snow with a pony, before returning for Christmas cake and the children pull a giant Christmas cracker. Moving on to springtime, the girls feed ponies and foals in a field.

The film then shows the family in Blackpool in the summer of 1939. The girls go for pony rides on the beach, but the camera focuses predominantly on the newly built casino building at the Pleasure Beach, designed by Joseph Emberton, with its tall corkscrew staircase. A group of people are filmed looking up at his building.

The film finishes with scenes of the girls playing with other children and Jocelyn's 8th Birthday Party, held in 1940. Children and adults sit out in the garden, the mothers wearing smart hats. The children play on the grass, sit on the swing and play with balloons and party toys. [Note: the colour has faded to red in some sections] 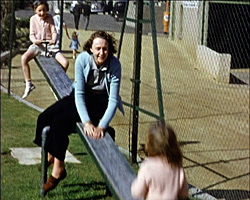 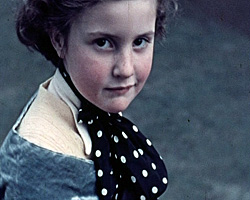 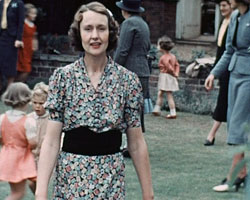 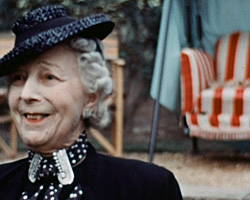 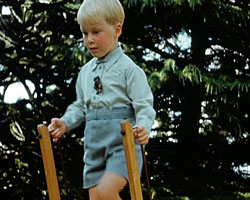 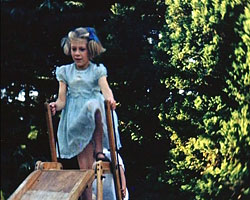 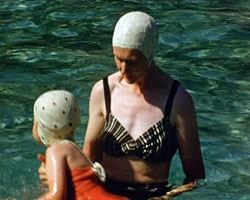 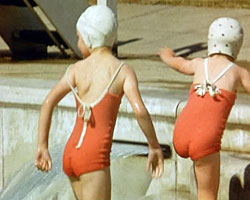 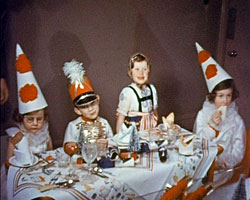 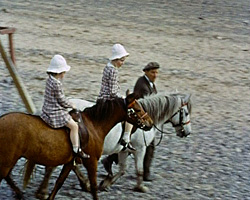 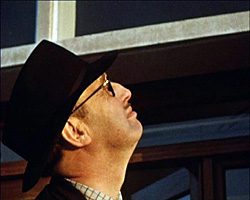 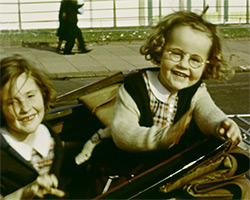 This film has an essentially family orientation, focusing attention on the children. The two sisters are filmed here, as in many of Emberton's films, playing in their garden and on family outings. The events captured on film were edited together at a later date, with accomplished inter-titles added. The compilation of items spans the few years in the run up to the Second World War. War-time restrictions and the limited availability of cine film at that time meant the this was some of the last footage filmed by Joseph Emberton before the war took hold, only resuming filming again in 1948.

Evidence of the Emberton's comfortable lifestyle is found throughout the films, such as the grandparents' arrival at the Emberton's large Surrey house, the presence of the nanny at home and with the family on outings, the champagne on Christmas the table, the smartly dressed guests at Jocelyn's 7th and 8th birthday parties.

However despite the family focus of the film, the trip to Blackpool and the shots of the newly built Casino building with its distinctive corkscrew tower offer glimpses of Joseph Emberton's architectural work. Joseph Emberton was a noted British architect, designing some of the defining modernist buildings of the 1930s. His designs included the Empire Hall, Olympia; Simpsons of Piccadilly and the rebuilding of Blackpool’s Pleasure Beach including the Grand National roller coaster, the Fun House and Casino buildings. Another film in the collection, [At the Seaside] (ca.1935), shows scenes of the rides and 'Fun House' at Blackpool Pleasure Beach. The film American Visit (1938) shows Joseph Emberton's trip to New York with Pleasure Beach owners Leonard and Doris Thompson. The film [Exhibitions] (1937-1938), also records his visits to European architectural exhibitions in Düsseldorf, Paris and Glasgow.

In terms of family life, a comparable, large collection of films portraying children as they grow up, is the Gowlland Family collection dating from the late 1930s to the early 1960s. Their first film, Rosemary; [Family Events of 1939] (1937-1939), shows the early years of their daughter's and family life in the run up to the Second World War including the celebration of Christmas.

Mrs. Emberton in printed frock In this film, Mrs. Emberton is wearing a good example of smart daywear. As the hostess of her eldest daughter’s birthday party, she has decided to wear a multi-coloured print dress. The outfit appears to be made of a synthetic material, such as rayon, that loosely follows the contours of its wearer’s body. The dress has a shallow V neck collar with bunched sleeves, these design details are typical of 1930s and 1940s styles and create the wide-shouldered look popular in this period. Mrs. Emberton has added a wide black belt to the dress in order to give it more shape and definition. The dress hangs to just below the knee and has small box pleats at the end of the skirt.

Printed fabrics were very popular at all levels of fashion during the 1930s. Floral designs dominated, but geometric forms were also much in evidence. They are apparent in readymade styles – bought from local boutiques and department stores, as well as in the fabric designs women could buy for home dressmaking.

This film also shows a wide array of children’s wear, including children’s winter outerwear, fancy dress costumes, party clothes, summer dresses and bathing suits. The film also shows children in their pyjamas and undergarments. Mrs Emberton is seen wearing a two-piece bathing costume and the film also illustrates the growing trend for women’s separates, such as cardigans, skirts and t-shirts. In addition, there are examples of a fashionably dressed elderly lady and a nursemaid in uniform.

The clips below are taken from the same film:

The Surrey History Service collects and preserves archives and printed material relating to all aspects of the history of Surrey. The Centre also has a selection of films from Screen Archive South East, including examples of the Emberton collection. The Centre's index and collections catalogue are available to search online.
http://www.surreyarchives.org.uk/Calmview/

“There is a wealth of references to individuals and families in the Access to Archives (A2A) catalogues. These catalogues describe archives created both by individuals and families and by a wide range of organisations (such as local government bodies, courts, businesses, charities and local societies), held in hundreds of record offices and other repositories all over England”.
http://discovery.nationalarchives.gov.uk/

The site contains links to information and images on all aspects of architecture, including links on Joseph Emberton and his buildings.
http://www.architecture.com/Explore/Home.aspx

The Design Archive, at the University of Brighton, holds an extensive collection of material relating to Joseph Emberton's architectural career. The collection "consists of several hundred items, including photography, news cuttings and correspondence".
http://arts.brighton.ac.uk/collections/design-archives/archives/joseph-emberton-archive2

This website, constructed by a relative of Joseph Emberton, provides some background information on the architect and his family. The site also provides some information on Emberton's most prominent buildings and his place in the history of modern movement architecture
http://www.joseph-emberton.co.uk/

The History of the British Seaside Holiday

"This site is dedicated to the history of British seaside holidays. Our main interest is in the twentieth century, particularly from the nineteen twenties onwards." This site includes a page on seaside architecture and features the Casino building.
http://www.seasidehistory.co.uk/