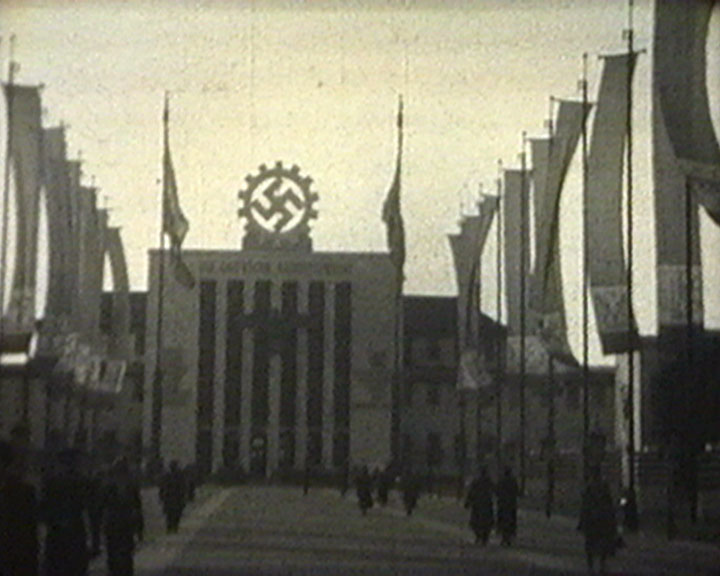 In this film, Joseph Emberton's involvement in modern architecture is illustrated through his travels to European architectural exhibitions which included buildings designed by Emberton himself. The film begins in black and white with a visit to Dusseldorf in 1937. Here, the film and the architecture, are dominated by the Nazi swastika. The film opens with a title "Düsseldorf Exhibition" with a swastika at the centre of the image. The film features the "Reichsausstellung Schaffendes Volk" (or "Creative Nation") exhibition and the film focuses on the buildings and grounds, along with the swastika flags lining the avenues and on the buildings themselves.

The second section of the film, in colour, opens with the title "Paris Exhibition" and features the 1937 Exposition Internationale, which included some of Emberton's designs. There are night time shots of neon light displays, fire works and illuminated fountain displays. Brief shots of women in white outfits ironing linen beneath a sign reading ‘Launderette Ries Lever Française'. The title; "Racing at Auteuil" opens a sequence filming a day at the races in Paris, including the horses being led by their trainers and scenes of the racing. This section includes a brief sequence at Dunkerque, showing a ramp carrying railway tracks which connect with tracks on board the Dover-Dunkerque train ferry. The Berthing Master checks the rail connection between ship and ramp. The stern of the ferry (unidentified - this is the ‘Hampton Ferry’. ‘Shepperton Ferry’ or ‘Twickenham Ferry’, which inaugurated the route in 1936) is shown, revealing the four numbered tracks and entrances into the train deck. A small goods truck is shunted on board by a steam engine.

The final section of the film features the 1938 Empire Exhibition. This large trade fair was held in Bellahouston Park, in Glasgow from May to October 1938. The modern architectural buildings at the exhibition include an 'Engineering' pavilion, the Canadian pavilion, an 'Industries' pavilion, and the 'British Railways' pavilion, designed by Emberton. The film lingers specifically on the prominent structure of the 'Tower of the Empire'. Also filmed are the fairground rides and roller coaster in the grounds and brief shots of Joseph Emberton and his wife Kathleen. King George VI and Queen Mary are shown arriving to officially open the exhibition. There are scenes at a large stadium showing military bands and the Royal family arriving in a horse drawn carriage.