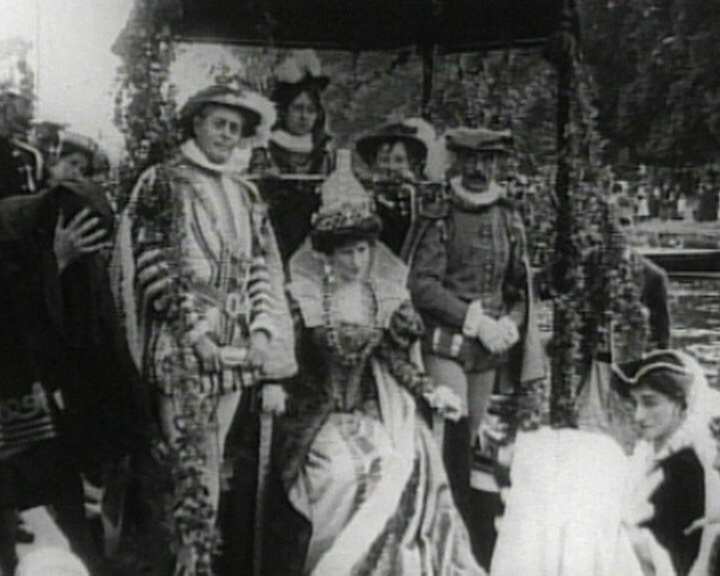 Intertitles introduce the film: “Queen Elizabeth at Tagg’s Island (“Karsino”) Picturesque Mediaeval fete in aid of the widows’ and orphans’ fund of the National Fire Brigades Union”. VIPs and Fire Chiefs inspect the firemen; also present is the brigade’s St Bernard dog. A large rowing boat carrying the ‘royal party’ arrives at Tagg’s Island on the River Thames. Onlookers watch from the opposite riverbank as the actors dressed in Elizabethan costume disembark from the boat. ‘Queen Elizabeth’ is escorted from the boat. The firemen, women and children watch as the pageant procession passes by. The film ends with a brief demonstration of Elizabethan firefighting equipment.

This short film is believed to be a Topical Budget newsreel film made by the Topical Film Company. At the time this film was made Tagg’s Island was owned by musical hall impresario Fred Karno (real name Frederick John Westcott). Karno had bought the island the previous year (from the Tagg family) and built an extravagant hotel/’entertainment complex’ on it, naming it the Karsino. There is the briefest glimpse of part of the Karsino hotel towards the end of this film. Karno is notable for being credited with giving a number of big stars their start in the entertainment business. Amongst Karno’s troupe he took to the USA were Charlie Chaplin and Stan Laurel. It is unclear why the Karsino was used as the venue for the fundraising charity event featured in the film. As the Karsino had opened its doors just weeks prior to this event it may well have been a shrewd publicity stunt by Karno. Or perhaps the organisers asked to use the venue in the hope that Karno’s wealthy society associates would attend and donate to the fund? The hotel was demolished in 1972.

Several other films in Screen Archive South East’s collection feature pageants. Bexhill Pageant (1927) depicts a large-scale pageant dramatising events from the town’s history. The “Pageant of Ashdown Forest 1929” appears in [Local Scenes and Family Pictures] (1927; 1929); taking part in the pageant is Christopher Robin Milne and children dressed as Winnie the Pooh and friends. [A Molesey Regatta] (1921) shows further scenes of boating on the Thames around Molesey. Screen Archive South East also holds a considerable amount of material featuring images of the Fire Services, including the “Dennis Specialist Vehicles” collection (makers of firefighting appliances). [Fire Brigade] ([1937]?; 1939) is a compilation of films made by an amateur cameraman showing the work of the fire brigade in Surrey and West Sussex. Both [Fire Services Display] (1955?) and [Surrey County Council Fire Brigade Training Centre and Garden Party] (1964?) feature demonstrations by the Fire Services.

The Local Studies Collection at Richmond-upon-Thames Library has a wealth of information on Tagg’s Island and Fred Karno and the collections catalogue can be searched online via the website
http://www.richmond.gov.uk/home/services/libraries/branch_libraries/local_studies_collection.htm

The Surrey Fire Brigades Preservation Trust at Reigate houses the Fire Brigade Museum which holds photographs, uniforms, books, records and objets relating to the history of firefighting in Surrey, as well as fire engines dating as far back as 1744.
http://firebrigadesofsurreypreservationtrust.webs.com/

Compiled by a fan, this website gives a broader insight into Fred Karno’s life as music hall impresario, owner of the Karsino and his later demise.
http://myweb.tiscali.co.uk/sherwoodtimes/karno.htm

Tagg's Island’s own website. The site is primarily dedicated to the island as it is today but does give a brief history of the island.
http://www.taggs-island.com/