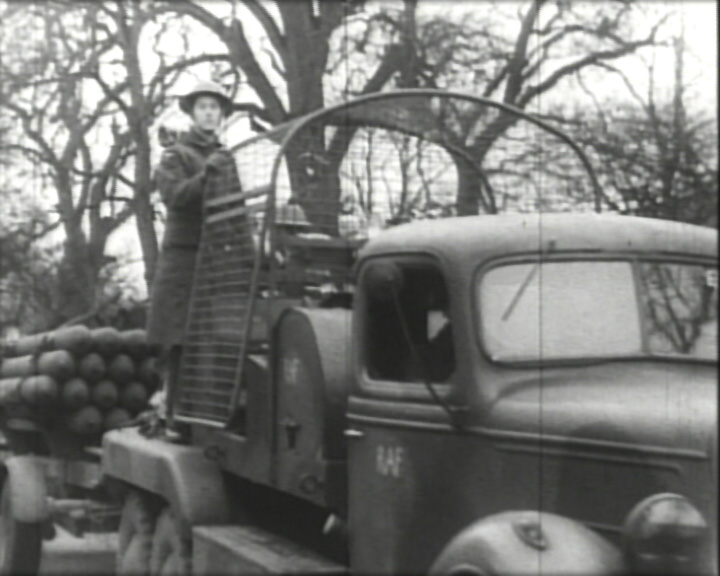 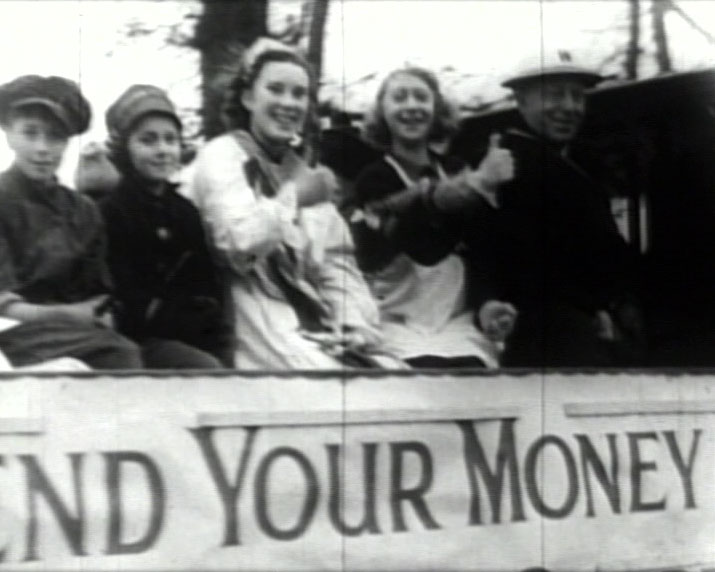 Scenes of the Parade for Victory through the streets featuring tanks, arms and weapons, and the wreckage of a German plane. Crowds line the streets, some hold placards and banners. Members of the army, Civil Defence Services, ambulances and rescue parties, boy scouts and the Red Cross take part in the parade. Children in the crowd hold banners encouraging people to invest their money in War Loans, while posters along the roadside promote National War Bonds. Sir Malcolm Fraser, Lord Lieutenant for Surrey, takes the salute, supported by Commander Godfrey, Chairman of the Council and Captain Tuckwell MC of the Home Guard. A military band plays as the parade passes the dais positioned outside the Regal Cinema. The film ends by focusing on the importance of contributing to war savings, particularly for the sake of the children. 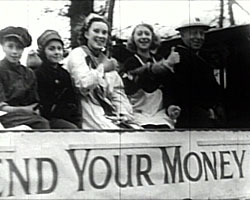 During the war, government campaigns were held to encourage the public to help fund the manufacture of military weapons badly needed for the war effort. To help generate these funds, the government established National Savings Campaigns to encourage investment in 'war bonds' and similar loan schemes. To back up these campaigns and encourage local support, various events were held regularly across the country including 'Wings for Victory', 'Salute the Soldier' and 'War Weapons Weeks'. These events would be run locally and include a variety of community activities and fund-raising parades.

The 'Parade for Victory' held at Walton, shown in this film, is part of the local 'War Weapons Week' events which was backed up with leaflet and poster campaigns, some of which can be seen within the film itself.

The film was commissioned by cinema owner Lou Morris. Mr Morris owned several cinemas across the country. His Regal Cinema in Walton-on-Thames can be seen towards the end of this film. The film-maker is assumed to be Clifford Spain, the cinema's manager. Clifford Spain shot and compiled several newsreels of local events throughout the 1920s and 1930s.

Screened for the local cinema audience, the film would have verified the town's commitment to fulfilling its duty to the country while instilling a sense of pride in one's local community. In addition, the film would've benefited the cinema owner and manager by drawing in people wanting to watch themselves on the big screen.

The Surrey History Service collects and preserves archives and printed material relating to all aspects of the history of Surrey. The Centre also has a selection of films from the Screen Archive South East, and its collections catalogue is searchable online.
hhttp://new.surreycc.gov.uk/heritage-culture-and-recreation/archives-and-history/surrey-history-centre

References to other films of War Weapons Weeks made by newsreel companies can be found in the The British Universities Film and Video Council's News On Screen database. The database is searchable online.
http://bufvc.ac.uk/newsonscreen

Wartime childhood memories recounted by a resident of Leatherhead. Relevant to Walton’s Parade for Victory (1941) are the author’s recollections of War Savings Weeks and parades.