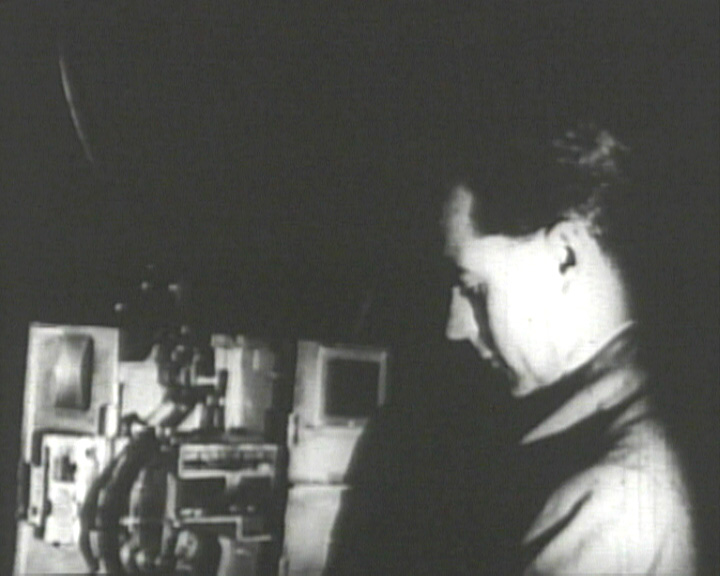 On 24th May 1930 (?) the camera films the spectators, floats and participants of the Walton-on-Thames street procession in aid of the Walton-on-Thames, Hersham and Oatlands Cottage Hospital. An audience of children wait outside Waring & Co. for the parade to pass - elsewhere the stationary floats pose for the camera, some exhibiting collecting tins. The grounds of Lower Halliford House play host to the first annual sports meeting of the British Legion. Policemen marshal the crowds who consciously pose for the camera. Men enthusiastically compete in various outdoor games - a football match in potato sacks; a race straddling planks of wood on a track marked out by the Stars and Stripes flag; a pole pillow fight which is commented on by a watching clown. At The Shepperton and District Conservative Association Garden Fete on 29th July 1931 children play traditional fete games including Hoopla, and the camera films posed group shots of an audience listening to a male speaker. Skiers take to the ski-jump at St Moritz in 1931. Clifford Spain is filmed operating a cinema projector in 1919 - he also splices a reel of 35mm film, checking the joints as he goes along. The film ends with images of a 1922 ploughing match, a popular and skillful agricultural activity - several teams of horse-drawn ploughs compete to turn the soil in a Chertsey field.

Although the production contexts of the individual films in [A ‘Capitol’ Newsreel by Clifford Spain I] (1919 - 1931) are unknown (except for the St Moritz footage which was produced by Pathé), the title suggests that the compilation was edited together by Clifford Spain. Indeed, one of the items shows Clifford Spain editing a reel of 35mm film and running it through a cinema projector. Clifford Spain became interested in moving images from a young ages and become the major figure in the development of cinemas in Walton-on-Thames. In 1927 Spain became the first manager of the purpose-built Capitol Cinema on the High Street proclaiming it to offer,"for the enjoyment of all, West End entertainment, under healthy and comfortable conditions. Of imposing and artistic design, luxuriously appointed, and incorporating the most modern system of ventilation and heating, seating, lighting and projection..." (Spain, Concerning Walton-Upon-Thames Past, Present and Future. 13).

In addition, Clifford Spain was known to have filmed events of local interest and to have included them on the Capitol's programme - it was an activity undertaken by the more progressive cinema managers in an attempt to attract large local audiences who were keen to see themselves on the 'big screen'. This is evident in the choice of material in [A ‘Capitol’ Newsreel by Clifford Spain I] (1919 - 1931) - the majority of the events are community-driven and feature prolonged images of the participants.

This book, which offers a critical history of filmmaking in Walton-on-Thames 1900-1939, is available at various Surrey libraries.

This book, produced as a Christmas Souvenir by The Capitol Cinema, involves commentaries by local dignitaries about the past, present and future of Walton-on-Thames - it includes a section on entertainment in the town written by Clifford Spain. A copy of the book is available at the Surrey History Centre.

Elmbridge Museum at Weybridge has a rich collection of objects and images relating to the history of the Elmbridge area (which covers Walton-on-Thames, Hersham and Oatlands). It has a research room and library for academic and public use, and collections relating to filmmaking in Walton-on-Thames during the Cecil Hepworth/Clifford Spain era.
http://elmbridgemuseum.org.uk/

The Surrey History Service collects and preserves archives and printed material relating to all aspects of the history of Surrey - amongst these are the records of 'The Music and Dancing, and Racecourses, and Explosives Licensing Committee' (1889-1930) of Surrey County Council which detail the approval, transfer or rejection of Cinematograph Licences throughout the county. The Centre also has a selection of films from the Screen Archive South East, and its collections catalogue is searchable online.
http://new.surreycc.gov.uk/heritage-culture-and-recreation/archives-and-history/surrey-history-centre

This is the website for British History Online, "the digital library containing some of the core printed primary and secondary sources for the medieval and modern history of the British Isles." It includes material from Victoria History of the County of Middlesex Volume III has a detailed history of Shepperton. Copies of the books are available at various Surrey libraries.
http://www.british-history.ac.uk/