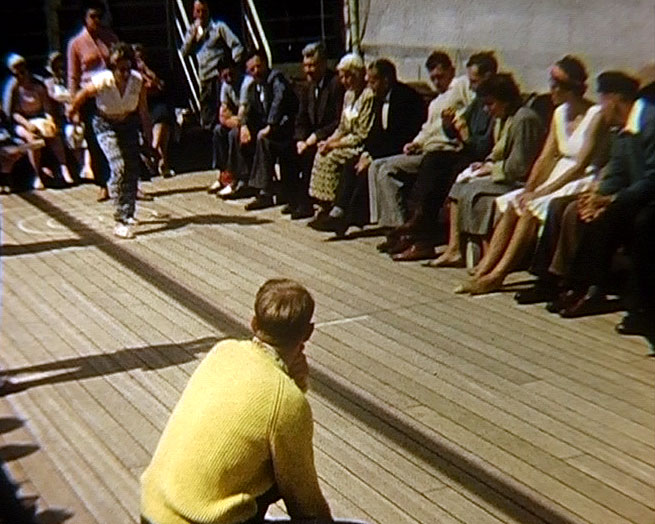 In the first part of this film, Rosalind Foster (Daughter of H A Voss) embarks on a world cruise on SS Southern Cross in September 1958, filming the crew at work as the ship leaves Southampton. The first port of call is Las Palmas, Spain. Shots of its coastline are followed by scenes of buildings surrounded by palm trees. On board again, passengers play deck quoits and other games. A day in Cape Town is spent with a friend, Mr. Garrood, visiting the nearby areas of Sea Point, Clovelly and Hout Bay, the National Botanical Gardens at Kirstenbosch and wine estate Groot Constantia. A panorama across Cape Town to Table Mountain in the distance is followed by images from the botanical gardens and the vineyard at Groot Constantia. In Durban, Foster visits a Zulu reserve and the Valley of a Thousand Hills. As the passengers file off a bus in the city, an African in traditional dress waits with a rickshaw. Foster films a view across the city before being taken to the Zulu reserve, where Africans dance for the tourists. The ship leaves port once more and the next scene is of dawn as the ship nears Australia. Once on land, Foster visits Perth and the view over the bay is followed by scenes of Winthrop Hall, on the University of Western Australia campus, and its grounds. Images from a wildlife park follow, before footage of the Fallen Sailors and Soldiers Memorial on Monument Hill in Fremantle, just south of Perth, and the view across the coast from the hill. The ship then leaves for Melbourne, where Foster spends the day with a Mr and Mrs Stevens at Ivanhoe East, a suburb of the city. The friends travel to the Dandenong Mountains, east of Melbourne, for a picnic. In Sydney, Foster visits the Blue Mountains, and take in the views from the Katoomba Cable Railway. The ship moves on to New Zealand and the Pacific Islands, and Wellington is the next stop. Views across the city and bay from above are followed by scenes from parks and gardens. At Fiji, Foster films the disembarkation of the island's new governor and passengers, but is unable to land himself because of a polio epidemic on the island. Scenes of the coastline of Tahiti in the distance are followed by footage of sea bathers at the island's beaches.

In the second part of the film, Foster is on the deck of the ship as it sails down the Panama Canal, and is towed through the locks. The ship stops for refuelling at the island of Curaçao and Foster takes a shopping trip to its capital, Willemstad, where she films the colonial buildings and busy streets. Trinidad's capital Port of Spain is the next stop, where Foster visits parks and gardens, and films the sunset at sea. In mid-Atlantic, passengers take part in obstacle races on deck, before finally disembarking as the ship returns to England. This is followed by footage from another cruise, over Christmas and New Year 1958/1959, on QSS Arkadia. The first scenes are of the port of Tangiers coming into view. Foster's fellow passengers take camel rides and Foster films the city's historic buildings before moving on to spend Boxing Day at Las Palmas. Views across the city and the harbour are followed by shots of the beach and a linen market on the deck of the ship. In Tenerife, Foster visits La Orotava valley, the banana plantations overlooked by the Orotava mountains, and the Orotava Botanical Gardens. New Years Eve is spent in Madeira, where rowing boats take the guests to shore, and Foster films tourists riding on the wicker toboggans traditionally used to travel down the steep slope from Monte to Funchal. Back on board a man sells souvenirs on the deck of the Arkadia. A firework display at midnight is followed by a day spent relaxing on the deck. As the ship nears Lisbon, Foster films the coastline of the Tagus estuary, and the Bugio lighthouse in the distance. Coming into port, porpoises play alongside the ship, and Lisbon's statue of Christ the King come into view. The film ends with Britain's white cliffs in the distance as the ship nears home.