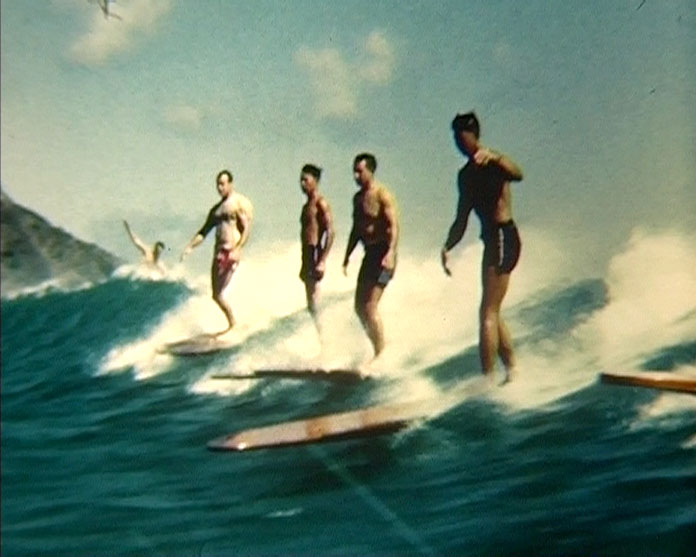 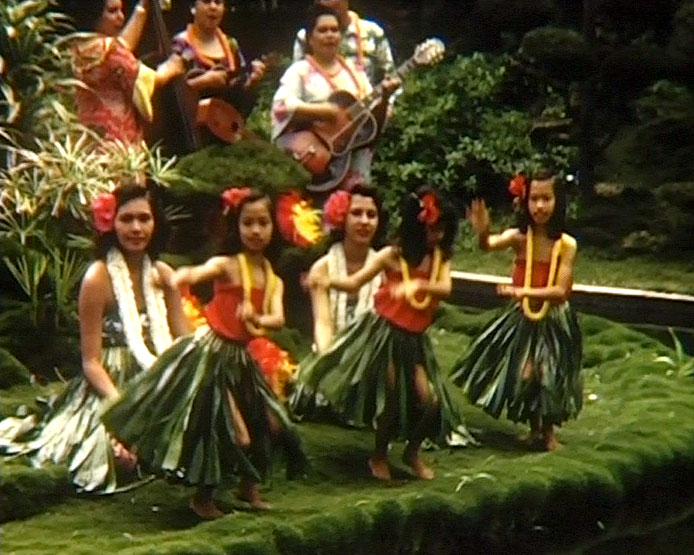 Filmed in December 1949, the opening scenes of this film are of the view of Diamond Head, an extinct volcanic crater, at Waikiki Beach. Shots of the beach are followed by images of the roadside sheltered by palm trees and the swimming pool and terrace at a hotel. A group of musicians and singers perform in traditional dress, and women dance the hula. Views of the local landscape are followed by more scenes of the beach in the shadow of Diamond Head, where people are surfing and paddling in canoes. The exterior and gardens of the Royal Hawaiian hotel are filmed. Scenes of surfing follows, which is likely to have been professionally shot and purchased material rather than filmed by Voss himself. The footage shows surfers, some of whom do tricks for the camera; one surfing with a woman on his shoulders, and then surfing whilst standing on his head. Returning to Voss's film, shots of the coastline are followed by scenes from the city of Honolulu, including the statue of King Kamehameha, the Iolani Palace, and a view across the land to the coast. Scenes of homes, gardens, and mountains in the distance follow, before shots of the 'pali', or cliffs, and the landscape and regional landmarks of Oahu, the Hawaiian island which is home to Honolulu. Voss films sugar cane plantations with mountains in the background and pineapples ready to be harvested. More shots of the rural landscape and fields being ploughed and harvested by hand follow, before a title introduces footage of Voss's visit "With Mr. and Mrs. Terry Parker and a luncheon party at the Willow restaurant with Mr. Ronald Q. Smith and Mr. Gordon B. Hayes", filmed in May 1951. The next shot sees the Parkers smiling for the camera at a garden table. At the luncheon, groups of men mingle in gardens where the plants and pond are filmed. The film closes with a sunset over the sea.

In the next installment of this film, also shot in May 1951, Voss travels to the island of Hawaii, which as the title explains is "the largest of the Hawaiian islands formed by the great volcanoes Mauna Kea, 13,825 feet, now dormant, and Mauna Loa, 13,680 feet, frequently active". Images of maps of the various Hawaiian islands are followed by footage of the flight to Hilo airport on Hawaii, with aerial shots of the islands, including images of Haleakala, an extinct volcano on Maui, and the nearby coastline. As the plane nears Hawaii island, the snowcapped peak of mountain Mauna Kea can be seen peeking above the clouds. Views of Hilo follow, taking in its vegetation, waterfalls, homes and gardens, before an image of the Kilauea volcanic crater and its fumaroles. There follows some professional footage filmed by the Hawaii Natural History Association of an eruption in April 1950 on the flank of Mauna Loa, and the lava flows to the sea. Shots of the nearby Volcano House Hotel are followed by the view from a road sloping down towards a valley, with Mauna Loa visible in the distance. Shots of Mauna Loa overlooking the sea are followed by more footage from the Hawaii Natural History Association of a 1951 eruption in the crater of Kilauea. Footage of a visit to the tree fern rainforest in the Hawaii National Park which houses the volcanoes follows. Next, Voss visits recent lava flows, where a man demonstrates that they are still hot enough to ignite petrol, and films the volcanic landscape. Shots of Kona Inn are followed by scenes of Kailua-Kona and the landscape of Kailua Bay. On the flight back to Honolulu, Voss films aerial shots of a mountain and the islands' coastline. The film ends with Hula dancing at Queen's Surf, Honolulu. Two women perform with a group of young girls, before a man joins them for the finale. 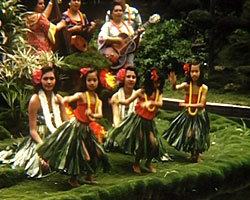