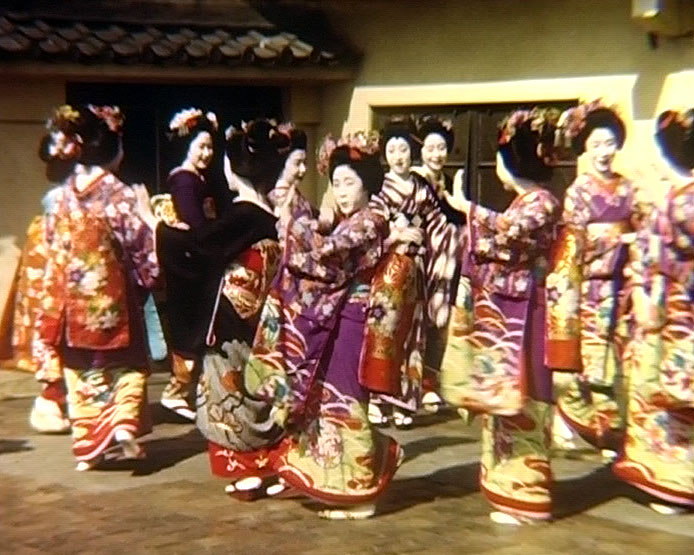 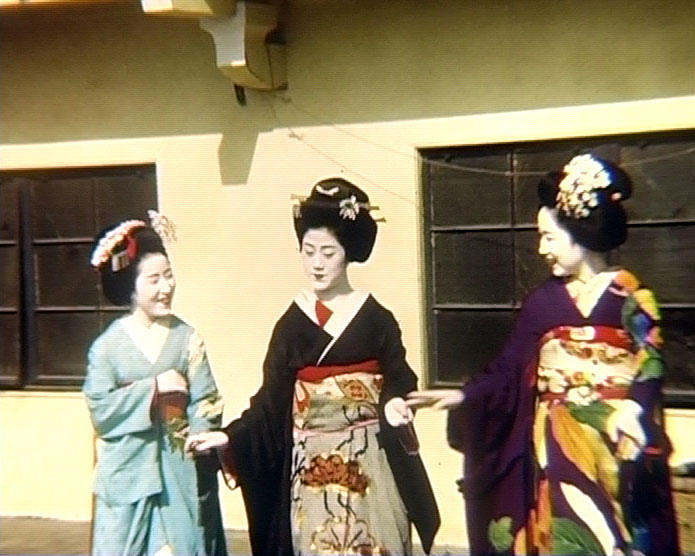 Voss's first film of Japan, recorded in 1949, opens on a group of European people relaxing on a verandah in the Katase hills, followed by scenes of the beach at Sagami Bay, moored fishing boats and crowds of local people crossing the Enoshima Ohashi bridge to Enoshima island. Voss then visits his friends' modern house in Tokyo, and the traditional Japanese dwelling of another acquaintance. The friends chat in the traditional Japanese interior at the end of this first part.

The next installment was filmed in April 1951. It opens with a shot of Mount Fuji from the train as Voss travels to Kyoto, where he visits the cherry blossom in the garden of Yamashita, Ninnaji Temple's Niomon (Two Kings Gate), and other temples and shrines. Voss's friends cross the stepping stones in the garden of the Heian-Jingu shrine. After visiting Taiheikaku covered bridge, the friends walk along the river, where Voss takes boat trip. In a theatre at Kyoto, Voss films a performance by some geishas. At Kensui Hotel on Sensui island, Japanese hosts greet Voss on his arrival. Voss films the landscape from a boat trip in the bay. A group of friends have lunch at the Taki guest house at Befu and Voss travels back by road to Kobe via Akashi, filming street scenes, and rural landscapes en route.

In the next reel, filmed in May 1953, Voss visits Miyanoshita, one of seven 'onsen' or hot springs near the town of Hakone, before travelling by steamer across Lake Ashi. Once arrived he visits Hakone shrine, hidden in the forest at the foot of Mount Hakone, with Japanese friends, before heading to Atami, a hot spring resort. Next, Voss is just outside Kamakura, visiting the 'Great Buddha', Kamakura Daibutsu at Kotokuin Temple. Streets scenes in Kamakura are followed by shots of the gateway and temple of Hase Kannon. In Nara, Voss visits the famous Todaiji Temple with the Daibutsu-den containing the greatest bronze Buddha in Japan. On the steps of the Daibutsu-den, the largest wooden building in the world, people rinse their hands and mouth before entering. In the following scenes, Nara hotel, then the five storey pagoda at Kofukiji, are filmed from the gardens. Next is a trip to Wakamiya-jinja, a shrine in the precinct of the Kasuga Taisha Grand Shrine. People feed the deer which inhabit the Nara-koen Park in which the Kasuga Taisha shrine is located. Stone lanterns line the approach to the main shrine and hanging lanterns are hung along its corridors. Shots of Osaka castle are followed by scenes from the hot spring resort of Jozankei in Hokkaido, located in a gorge on the Toyohira river. The cherry blossom is in bloom around the town, overlooked by mountains. Voss then travels to the Kawana Golf Hotel near Ito.

In Hong Kong, Voss visits Kowloon and the nearby countryside with friends. Looking out to the East China sea from the Kowloon peninsula, Voss films steamers, liners and traditional Chinese fishing boats as he arrives by boat at the city's waterfront. In city street scenes, the women are in Chinese dress, distinct from that seen in Japan. Men farm on land overlooked by mountains, driving a bull-plough over muddy marshland, and working in rice paddies.

In the final part of the film, Voss is in Egypt. The initial scenes are views across the Nile to the pyramids in the distance. Voss visits the pyramids and the Sphinx, filming them from a garden café nearby where Arabs offer camel rides to the tourists. People pass on donkeys. The next views are of the citadel, before a visit to the home of friends at Kafr az Zayyat. 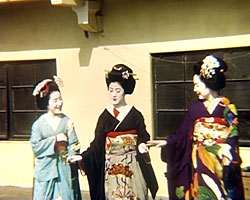