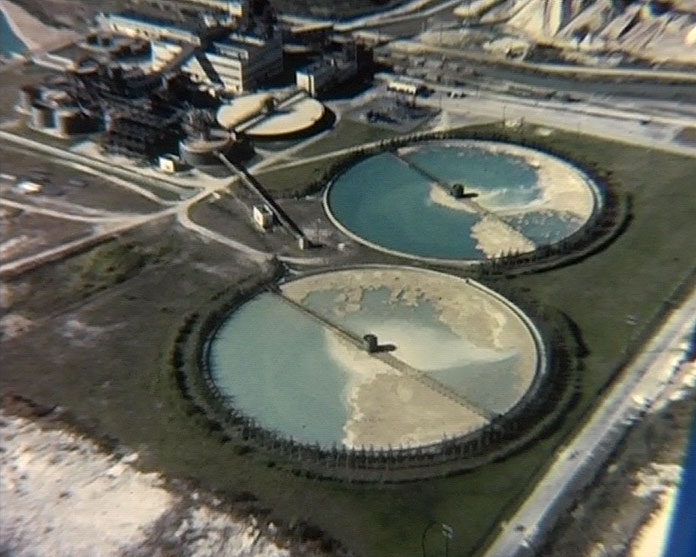 Filmed at Noralyn Mine in Mulberry, Florida, a large phosphate plant owned by International Minerals & Chemical Corporation, the opening scenes are aerial views of the mine and processing plant. These are followed by footage of the dragline, the large crane which removes the topsoil to excavate the phosphate mix, or 'matrix' beneath. The next scenes are of the pit, where the matrix is mixed with water to produce a slurry for processing at the flotation plant (where the phosphate rock will be separated from sand and clay). The dragline dumps the soil at the side of the pit, which is sprayed with powerful jets of water. The following footage is of the screening which separates large lumps of phosphate rock from finer particles. The phosphate is screened in rotating barrels and sprayed with jets of water before being rushed along on a conveyor belt as the clay and finer rock filters off. Machinery churns, sifts and rakes the slurry. The next stage filmed is the 'hydroseparator', a large settling tank to 'deslime' the small phosphate and sand particles, which settle as the clay overflows and is pumped away. Machinery at the tank site churns the clay, and barrels spin, as it is pumped into a pond. More shots of machinery follow before a break in the film.

After the break, paddles are filmed agitating water, in what is probably part of the flotation process which separates fine phosphate particles from sand. Titles describe the water supply to the plant, followed by shots of the plant's 'clear water thickeners', large water tanks designed to hasten the settling of clay before drainage and the surrounding grounds, with stacks of phosphogypsum (a byproduct of the process) in the background. These are followed by shots of machinery and silos, filled from a network of pipes. More shots show the system of railway tracks that cross the plant, and the carts which run on it to transport the phosphate rock. The processes of drying and storage of the phosphate, for transport by rail, are introduced. Footage of the mill follows, where phosphate is unloaded and processed. Close-ups of pneumatic mills grinding phosphate complete the first reel of film.

The next reel opens with a Bartow street scene, outside the Polk County courthouse. Local houses, and tree-lined streets are filmed before shots of the I.M.C.C's new office building. In nearby Mulberry, Voss films a meeting at a swimming pool built by I.M.C.C. This is followed by footage of the Peace Valley mine from 1946. The 'dragline' crane is seen in operation, filmed this time from behind the operator's seat. Voss follows the processing of the phosphate from the Peace Valley flotation plant to the dryer and storage areas. Views of the plant and the surrounding area are followed by shots of the heated rotating drums of the phosphate dryers, before footage of another mine, Achan, which sends its phosphate to Mulberry for storage and drying. Someone holds their hands to the camera - in one a lump of the slurry with which the phosphate purification process begins, in the other the finished product. The films end at the loading plant, Seddon Island, near Tampa, where goods wagons on railway tracks transport the phosphate. The final shot is of a ship coming in to load up.