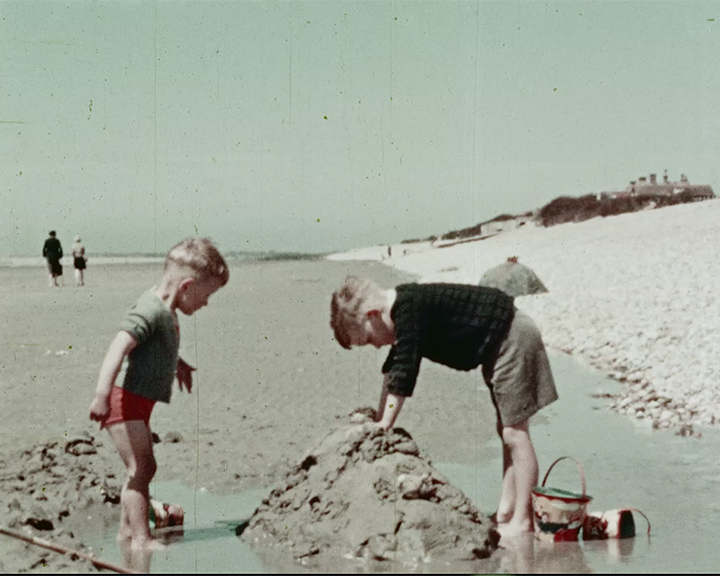 Titles: The film begins with girls diving from a platform into Chichester Harbour. The next shot shows girls diving from the dockside into the water. A boy is seen adjusting a dinghy's rigging and another dinghy is seen passing a large yacht at anchor in Chichester Harbour. A harbour official walks towards the camera after which we see a group of women holding up a dog for the camera and chatting. A woman gingerly gets into a rowboat after which we see a man in a small yacht sailing by. This is followed by three generations of a family onboard a yacht having tea. In another yacht we see three women, wearing cloche hats, dipping a ladle into the water and playing with a small girl, also wearing a cloche hat. The family are next seen playing on Chichester Harbour at low tide. Two of the men in the group play leapfrog in the water and leap over a small rowboat. A small girl wearing a bathing hat sits in a small tidal pool and is then seen playing with a man lying in the pool.

The film then relocates to Selsey Bill, where we see a large crowd listening to a speech given by a dignitary at the launch of the new lifeboat, Canadian Pacific 2. After the lifeboat is launched we see Bishop Bell, from Chichester diocese, descending a ramp leading from the boathouse. He is followed by other dignitaries after which the crowds disperse.

Intertitle: Wittering Holiday Summer 1938. We see a mother and her two small sons walking to a car which has attached to it a small sailing dinghy on a trailer. The car then sets off and we next see it at a garage. A sign marked Itchenor features distances from other towns and cities. The car is seen driving through the village and into a car park. Intertitle: Sunny Brae. We see that family at their seaside holiday home along with their two dogs. A cat is seen jumping onto the dining table to steal food. The family and many children sit in the garden having tea followed by a view of the sea and a sunset. We see the family on the veranda playing with one of the children. Intertitle: Sand Castles. We see several small children and their father playing on the beach and constructing sand castles with moats. We then see them, now in their swimsuits, paddling in the sea and using a lilo.

Intertitle: Eve's Holiday Wear Filmed at Bognor Regis. A young woman is seen walking along Bognor Regis' seafront. The camera gets a big close up of her face. Four young women in swimsuits and Captain's caps pose for the camera on the beach at Bognor Regis and then do silly dances and handstands. Views of the seafront follow as well as local traffic. Various women walk past the camera on the seafront, dressed in beach fashions and carrying Chinese-style parasols. Intertitle: The Beach Bognor Regis. We see crowds on the beach and a man collecting fees for the use of deckchairs. People paddle in the sea and children ride on donkeys. Pleasure boats are seen on a flimsy jetty filled with passengers. Intertitle: Jack Allen Presents The Express Girls. Three girls in swimsuits and wearing tap shows perform and high-kicking dance on the beach.

Intertitle: London Ladies MCC At Bognor. Several women motorcyclists, with numbers on their backs, arrive at the end of a race on Bognor's seafront in front of small groups of onlookers.

Intertitle: Wandering Around The Harbour. A small sailing dinghy at the entrance to Shoreham Harbour. Intertitle: From Large Coasters to Small Dinghies They Come And Go. The coaster SS Lanarkbrook passes along Shoreham Harbour followed by a variety of vessels and sailing craft including steam tugs. Intertitle:Through The Lock Gates. A large collier, Elizabeth Lysaght, arrives as the lock gates are opened followed by views of the crew working on deck. Shore crew get ready to secure the Elizabeth Lysaght at her berth with Shoreham Power Station in the background. Another coaster, Portslade, passes into the lock and the gates are opened. Intertitle: Some Just Stay At Rest. A houseboat at its moorings and a sunken rowboat follow. Intertitle: The End.

Children are seen emerging from a chapel doorway and waiting in the street. The Minister emerges from the chapel and smiles at the camera. The children and adults board two red coaches and arrive at Littlehampton. The group is seen walking along Arun Parade towards the seafront. We next see the daytrippers on the beach, either sitting on the sand or in deckchairs. We get a view of the beach and the Butlin's Park complex in the distance. Girls paddle in the sea and kick seaweed off their feet while a man digs a hole in the sand further up the beach. A small boy is seen on a small funfair ride while two boys take a donkey ride on the beach.

Scenes of a rough sea have the words to the hymn For Those In Peril superimposed. Intertitle: Let Her Go. A printed invitation to the event is followed by shots of the inner lighthouse and people seated and waiting for the arrival of Princess Marina, Duchess of Kent. After teams of lifeboat men and other dignitaries, she arrives and walks past crowds of onlookers towards a stand. Here we see members of the clergy and local civic leaders as well as Princess Marina, who delivers the naming ceremony. The lifeboat runs down the slipway after which the guests, including the Bishop of Chichester, Roger Wilson, depart. We see a helicopter flying overhead and the return of the lifeboat to the slipway. End Titles and Credits