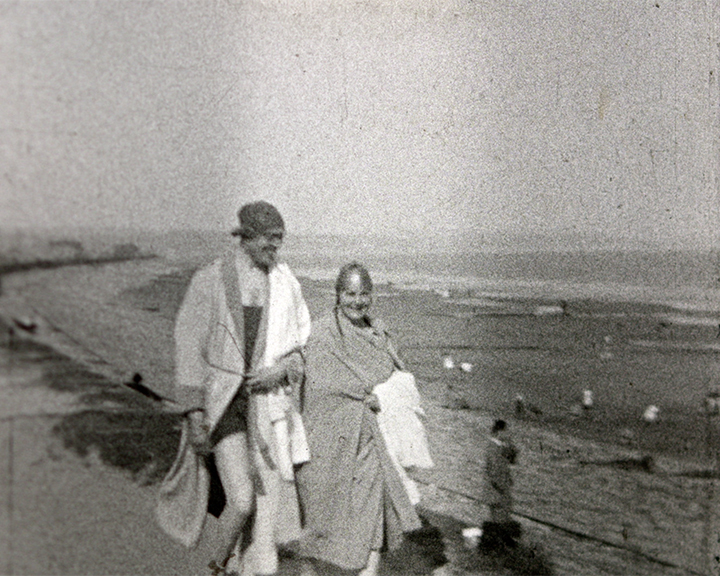 The film starts in black and white with Betty and Albert Jones, wearing swimming costumes, hats and towelling robes, making their way down to the sea. Further scenes on the beach show the younger children playing in the sea while the older family members sit, fully clothed, on deckchairs. An intertitle introduces: “The Hythe and New Romney Light Railway” and there is a shot of the train passing by, with men walking past the slow moving train, and passengers sitting in the train carts.

Two women and a man later lead exercise near a house in an attempt to warm up after the swim, with children joining them not too long later. Another title card then reads “Here comes the train!” with a steam train then shown pulling out of a station. An elderly woman is filmed looking at the camera, with an elderly man with a tobacco pipe following not too long after, with a younger woman. A family are waiting for the train to pull into the station, with the children getting in first, followed by the mother, and then the father. A final shot is shown with them waving at the camera, with a general shot of the train pulling away.

Intertitle: “Another, day, the bus” A bus then drives off.

Intertitle: “Fun on the sands”. A family plays in the sand, creating sand castles while others pass by the camera, with the family waving as the shot ends.

Intertitle: “The making of the feature film Dr Syn, 1937”, and follows a film crew filming the film with actors and crew participating. Holidaymakers play leapfrog on the beach, dig holes in the sand, and sit and relax on the beach.

Intertitle:“The School Farm, Rye Lesley Holmes, 1949”, with a sign reading “April Lambing” shown just afterwards. A man is shown leading a flock of sheep, down a country road, leading them through a gate into a field, where another man shuts the gate. Another gate reading “church farm” is opened, leading a group of boys into it, with a man following. General shots of sheep with their lambs are then shown in a field, with the boys and an instructor on looking and pointing at them. A boy plays with a lamb, then he puts it down as it comes towards the camera, ending the shot.

Intertitle: “Boys’ Brigade at Camber Sands 1938 (edited)”. In the next shot, a wide view of the campsite can be seen, with boys playing frisbee around it. Then a man is seen eating bread, while another comes in with some on a plate to give to the various boys on the campsite. The next shot is of boys playing on the beach in swimming trunks, with another shot showing them wading through the sea as they come closer towards the camera. They swim against the waves, being pushed back by them, before the shot ends.

The next part of the film reads “The School Farm, Rye Lesley Holmes, 1949”. A sign then reads “Young Farmers’ club notices.” with text underneath it reading “August the honey crop”. A demonstration of beekeeping is then shown to a group of girls as they see the beehives being smoked out. In the kitchen, women are shown curing honey and putting it into jars, with many jars of honey laid out on the table, as boys eat some honey left on a table.

Intertitle: “Golden Sands at New Romney Roy Sellen, 1964”, with a title-card following it reading “sand modeling competition”. Adults are seen on a sandy beach making sand sculptures, as a judge walks past their sculpture. A shot of a man and two women are shown walking on the beach before a title-card reads “Quick here come the judges”. The film is then sped up with shots of the competition, as a group sit on deckchairs laughing. A man and a woman walk past the sculptures as they look at them in great detail, with a final shot reading “Sea lion. The winner.” as the winning sculpture is shown, before the film ends.

The Railway featured within the start of the film is the ‘Hythe and New Romney Light Railway’. Known as ‘Kent’s Mainline in Miniature’, it is a world famous one-third full size steam and diesel locomotive that has powered its way along 13 ½ miles of track from the cinque port town of Hythe, terminating in Dungeness, a national nature reserve. The RH&DR was the culmination of the dreams of Captain J. E. P. Howey — a racing driver, millionaire land owner, former Army Officer and miniature railway aficionado and Count Louis Zborowski — eminently well-known racing driver of his day (famous for owning and racing the Chitty Bang Bang Mercedes).

To try to fulfil the ambition Count Louis Zborowski and Captain J. E. P. Howey attempted to purchase the Ravenglass and Eskdale Railway in the Lake District, but failed..

Despite this, the Count ordered two Pacific locomotives (Green Goddess and Northern Chief), to be designed by the leading model engineer of his day, Henry Greenly and built in Colchester by Davey, Paxman and Co.

Before they were delivered the Count was killed while racing at Monza in the Italian Grand Prix. Howey was left with two locos and the task of finding somewhere to run them. He commissioned Greenly to help him, and it was he that came up with the Romney Marsh.