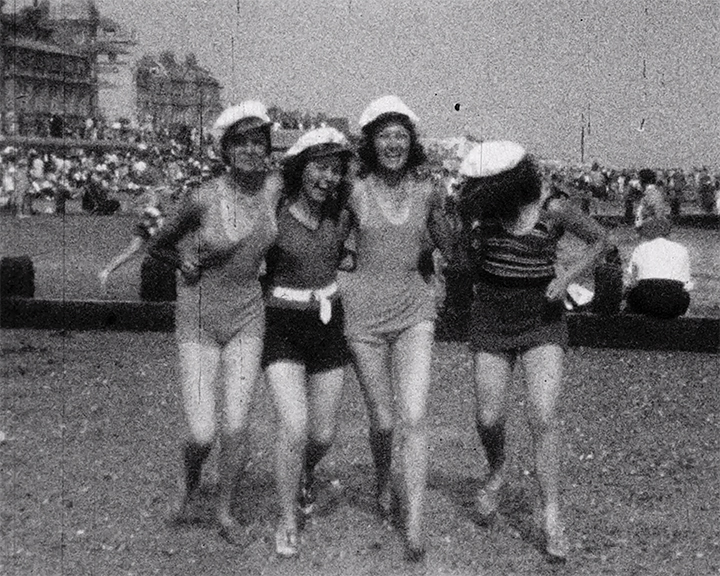 The black and white film opens up with shots of Chichester in 1935 during the Silver Jubilee Celebrations, showing views of the market cross and Chichester town centre. Cutting to a man tending to some sheep, with a crowd onlooking at Chichester Livestock Market.

The film now in colour, shows footage from 1972 of Chichester festival theatre with guests walking in. General shots of people talking, smoking and drinking are seen as they stand in the main reception.

The film cuts to a cobbled alley-way with three women walking down it, with flowers flanking their sides. The Chichester cathedral is then shown with a variety of angles, starting from the graveyard and ending on the spire.

Goodwood racecourse is shown from the point of view of the audience high up in the seating, cutting to jockeys and people preparing for the upcoming races, with a final shot of horse-racing.

The film then cuts to footage of Elsted Manor Farms from the 1930s-40s. Children are seen being led by a man with a bucket, exiting a wooden gate. A woman is then shown in a horse drawn carriage with two young children. Cutting to a wheat field, a man with a tractor and combine harvester tends to the wheat, with men then shown carrying bundles of wheat. Ending with a horse drawn carriage carrying a man and his son (?)

The film then shows Dell Quay in the 1930’s, with young women diving into the harbour. It then cuts to two sailboats, one stationary and one mobile with two women guiding it’s journey.

The film then shows Itchenor in the 1930’s, with a man walking towards the camera on the beach. A boat is then shown bobbing on the water as the Staley family enjoy afternoon tea. Scenes of people enjoying the beach are then shown with people in bathing suits and hats on the beach, jumping on the sand.

Colour film shows Butlins in Bognor Regis in 1963. A woman and her son (?) walk near to the pool outside and shots of women dancing in a large hall are shown shortly afterwards. A boy enjoys a ride alone while another boy looks on, he is later shown with the boy riding donkeys together. Children are then shown a traditional Punch and Judy show on the beach, with two children making sandcastles at the end.

The film reverts back to black and white to show George V leaving Bognor Regis in 1929. Cars drive through a road with huge crowds of people either side, waving union flags, and finally showing Queen Mary of Teck getting into a car to leave.

Reverting back again to colour to show HM Queen Elizabeth II on Maundy Thursday in 1986, visiting the city of Chichester. She waves with prince Philip in a car as onlookers are passed by.

General views of Chichester are then shown in 1962, with various cars passing by shops, with a view of the cathedral nestled in the Sussex countryside closing.

The Butlins in Bognor Regis shown later in the film had its presence first felt in 1932 with the opening of an amusement park; the operation soon expanded to take in a zoo as well. In 1960, Billy Butlin opened his first post-war mainland holiday camp, moving both the amusement park and zoo into the new camp. The camp survived a series of cuts in the early 1980s, attracting further investment and again in the late 1990s when it was retained as one of only three camps still bearing the Butlin name. The camp has since seen a raft of new construction as the company moves from chalet towards hotel-based accommodation. The shelter was a popular venue with the local press of the time reporting that patrons could “meet the elites” there. The following year, Butlin opened a zoo on the seafront. It opened on 5 July and contained brown, black and polar bears, hyenas, leopards, pelicans, kangaroos, and monkeys. The zoo had a snake pit as its star attraction where Togo the snake king would regularly give shows

The camp in the film is a result of Billy Butlin opening his new holiday camp on 2 July 1960 at a cost of £2.5 million. Once opened, the camp was a success, accommodating around 5,000 campers and another 5,000-day visitors.