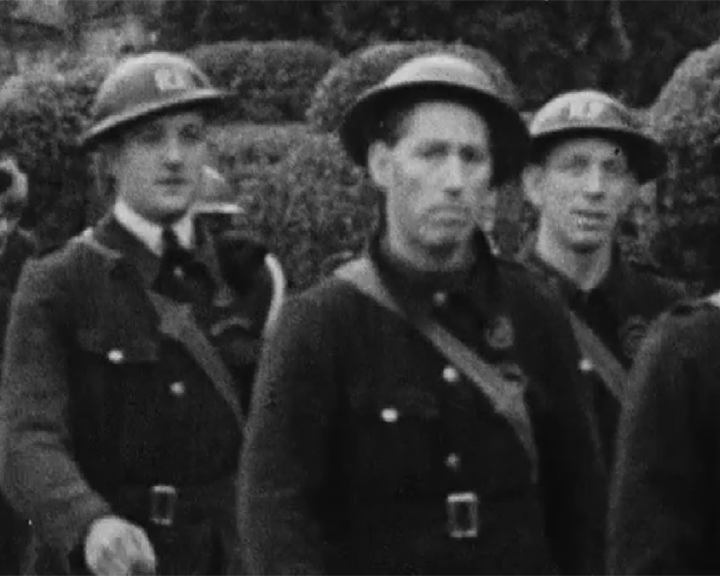 The film is structured as four vignettes (one voice for each grandparent) and is based on David’s reflections on conversations with them about their lives and experiences during World War Two.

The first poem is the voice of Flo

But for Uncle Bill’s dog who saw me
In the pond, on Street Bridge Farm, a girl
Barely grown, I wouldn’t have gone on
With our Irene to deliver milk
From a horse-drawn cart for Ginnie
My favourite aunt or smack bare
Bums on the outside loos. We made
Our own entertainment in those days
Before the mill, after a night with
Air raids: a ring-spinner at fourteen.

My dad, from the first time round,
The only survivor from Suicide Squad
In France.
No foot or heel and the shock of that
Direct hit sent mam into labour
Twins, Tom and Flo: Flo died of influenza
I became Flo: Tom, Dorothy, me
Nora, Fred, Mam and Dad. We laughed
A lot, loved a lot, despite
Rationing and not much of anything
Mam made everything out of it
Potato pie, beef pudding, cups of tea
Around the coal fire, our family,
Where we loved and laughed, saving pennies.

Grave ref 7.B.20
Where our Tom was buried.
“It’s too upsetting for your mother,”
Said dad. He burnt the photo
Of the grave. We never got over
Tom.
He left a light in my eyes
That I would give to my children, my grandchildren
And Ron who I met when he had no teeth
I said to Joyce, “that old bloke asked me to dance”
Had them out before the foxtrot that
We kept going through the war
Until we married in ‘46.

I were seventeen in ‘39
An electrical engineer
Apprenticed to repairing ships
Re-wiring the Atlantic convoys
Tried to join the RAF, as a volunteer,
My brother burnt my papers
“Don’t be such a bloody fool,” he said.
I joined the Home Guard, did my duty
Never discussed the war at home.

Life was there to be lived. Home was all
That mattered.
Played cricket. Fast bowler. Loved nature.
Knew where to look for a lapwing’s nest
Where the bluebells grew in the woods
Liked a cigar at Christmas, a laugh
A joke and a whisky. Made my own.

You lived for the moment, family,
Flo and I had many moments
Dancing to Glenn Miller
Our Moonlight Serenade
From the moment I first saw her
While walking in nature
I knew she was the one.

Couldn’t stand the nagging, dad’s note said
I was sorry, mam, but later I understood
Why dad had gone from the two up, two down
With the cotton mill behind.
Wasn’t nice. Mam told the police
Dad was frightening me at school
I never knew he came to see me.

I were four or five at the start
Black outs at windows, mam with a torch
Me, a baby, on a ventilator
In the air raid shelter
Going to the pictures with our Joan
Crying all through Bambi before
By taper light, we saw the cockroaches
Invading home and then they
Left with the dirty lady next door.

VE Day came and brought the street
Out to celebrate: me and my
Aunty Lily bringing food to the
Big party: us kids loved it. There was
Bunting, trimmings, the men were coming
Everyone was happy, together
I remember that joy so clearly
Lily and me, away from the war
Until I escaped home to marry Bob
And we were happy, always good.

It was the big adventure, the best days of my life
Re-enacting Westerns in the mills
Hunting for shrapnel that were always worth
A swap or a few bob. Started a life-long love
Of aircraft.

The Germans were always after AVRO
The factory where they made Lancasters
Never hit it but left the ruins for us kids
A Doodlebug hit vacuumed
The windows of the nearby terrace,
Leaving Christmas trees intact, baubles untouched.

In the evenings, we’d sit in the parlour
Of our terraced house, listening
To the radio, the comedians
Having a laugh, Grandad on his pipe
Turned upside down at night
Ducking into the Anderson shelter at the back
When the siren sounded, beneath
The soil and sods.

There was a bomb
That landed in our alley
Got wedged in the pantry
And didn’t go off.
My dad did instead, when he came home
From El Alamein
But I married Jean and we flew away
Together. Best days of my life.

David Woods is a writer and filmmaker. He has written, directed and produced two feature films, Till Sunset (which was distributed in the US and Canada in 2013 through R Squared Films) and Nightlens which is in post production(2020). He won the Award of Distinction at Canada Shorts 2016 for directing the short film @MovieGeek and received a semi-finalist placing for his short Split at the Hollywood Screenings Film Festival 2016. He has had short stories published in the e-zine The Pygmy Giant, on-line with Short Stories 101 and recorded on a podcast for Other People's Flowers.