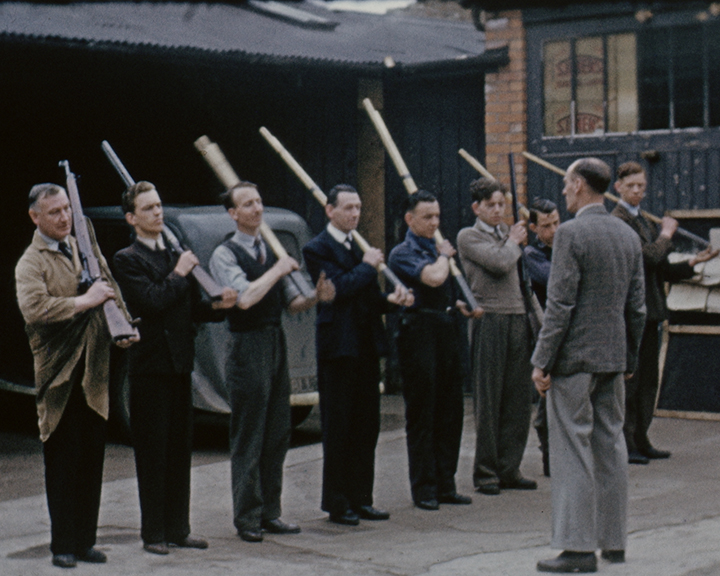 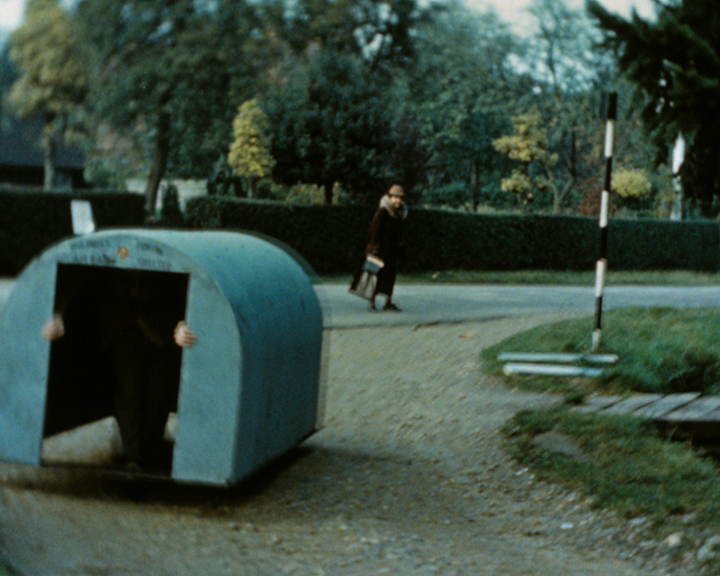 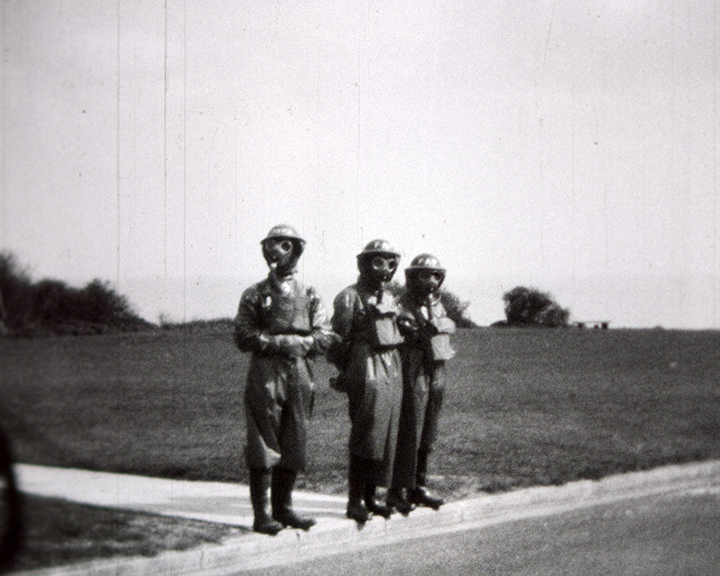 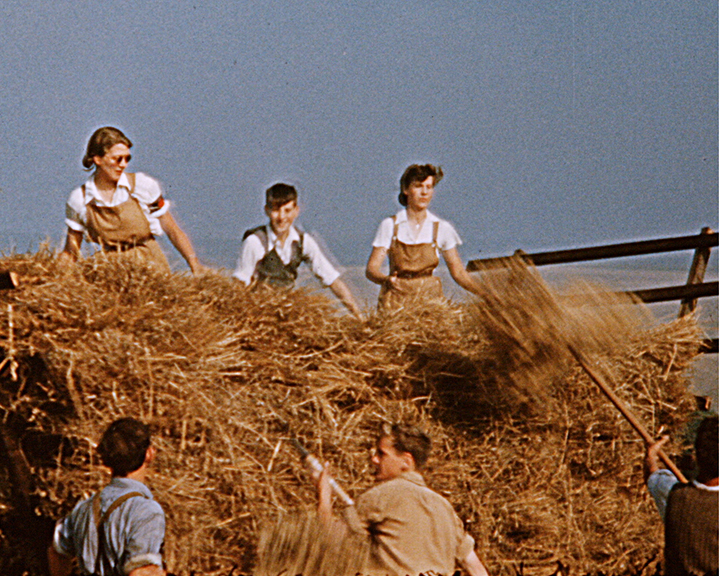 The film begins during the Munich Crisis with close up shots of newspaper posters declaring ‘Crisis’ and ‘Hitler Can Be Stopped’. Against the backdrop of the Houses of Parliament and Big Ben, we see an example of anti-aircraft artillery being demonstrated on Westminster Bridge. A variety of Civil Defence and Air Raid Protection posters are seen on a hoarding before a final newspaper vendor announcing that ‘The Balloons Go Up’.

Various wartime identity cards are seen after which we see soldiers testing anti-gas overalls and gas masks. They are joined by a mother, her small son and the family dog, all wearing civilian respirators. An Anderson air-raid shelter is comically ‘walked’ along a road before we see women posing proudly in front of a very large garden shelter.

After a barrage balloon slowly sinks into fields below, a troop of gas-mask wearing soldiers march past the camera, quickly followed by one of Herne Bay’s rather sinister Casualty wagons. After an ‘Air Raid Danger – Conceal your Lights’ poster we see a sandbagged entrance to a public shelter from which a small girl emerges.

At Knoll School, Hove, we see a classroom full of children donning their gas masks during a lesson while a group of workmen, members of the Local Defence Volunteers, drill with old service rifles and broom handles.

Wispy contrails tell of the RAF’s battle with the Luftwaffe high up in the skies over Sussex. Another Battle of Britain pilot sits in his Spitfire while an aircraftman readies his plane for another engagement with the enemy. The tail of a wrecked Luftwaffe aircraft is a reminder of that struggle and of the Blitz to come. Two girls are seen running to their garden air raid shelter as a pair of Air Raid Wardens get ready for duty.

In the aftermath of Brighton’s Blitz we see bombed streets, buildings and rubble. Rescue workers desperately clear away the wreckage while Civil Defence men and women are seen working in a local control room.

On the rolling Sussex Downs we see Land Girls driving tractors and ploughing fields and later bringing in the harvest, with the help of some local evacuees. These scenes are followed by soldiers driving their tanks past crowds during Brighton’s ‘Tank Week’ parade. Meanwhile, a Brighton trolleybus, heavily decorated for Warship Week, glides along the Old Steine.

Away from the Home Front, a Royal Navy commander inspects his crew before we see a Flower class Corvette, K 172 HMCS Trillium, pitching and tossing somewhere in the North Atlantic.

Parachutists emerging from an aircraft flying overhead hint at the D-Day operation and the inevitable invasion of the Nazi heartland. A Brighton trolleybus, now decorated with allied flags and photos of Roosevelt, Stalin and Churchill passes along the Old Steine. Meanwhile, AFS firemen drive past the camera on their makeshift fire engine hauling a pump. A rescue party ride on an L.U.D.C Rescue vehicle as various buses, converted to ambulances, drive past. Then we see an injured bomb victim being lifted from the rubble by rescue workers as schoolgirls and boys dash to their air-raid shelter where they are seen wearing their gas masks and reading comics.

Intertitle: We Celebrate Victory’ followed by a sign saying ‘The Last All Clear’. Newspapers proclaim ‘Victory in Europe’ while a resident in Croydon raises the Union flag on his house. His children, remove the family’s black-out panels and dump them in the garden.

In central London we see papers thrown from high windows and women dancing with soldiers, mostly with those ‘Bundles for Britain’ known as GIs. Large crowds throng throughout Coventry Street and more GIs dance with women of all ages. Massive crowds and happy faces dominate these London scenes. Meanwhile, in Brighton, a residential street is decorated for the VE Day celebrations. Groups of women, yet again, are dancing in the street. A Tamplin’s truck with an assortment of passengers rumbles past the camera followed by yet more uninhibited dancing.

A large crowd listens to the Peace Proclamation being delivered at Brighton’s Town Hall after which soldiers, sailors and WRENs march down Brighton’s seafront while saluting the Lord Mayor. All the while the crowds cheer. Near Balfour Road children enjoy an outdoor tea-party while a man provides the entertainment playing on his accordion. Children and adults eat and dance at various outdoor street parties around the town.

A family holds their very own VE Day party in their back garden raising their glasses in a champagne toast. The film ends with two small children riding their rocking horse while waving the Union flag. 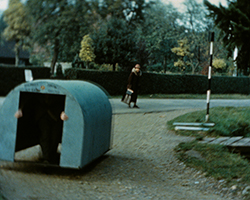 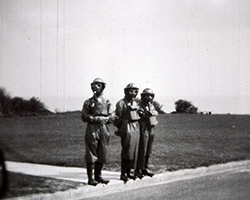 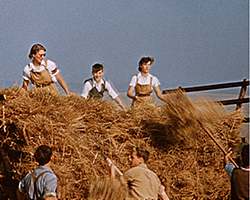