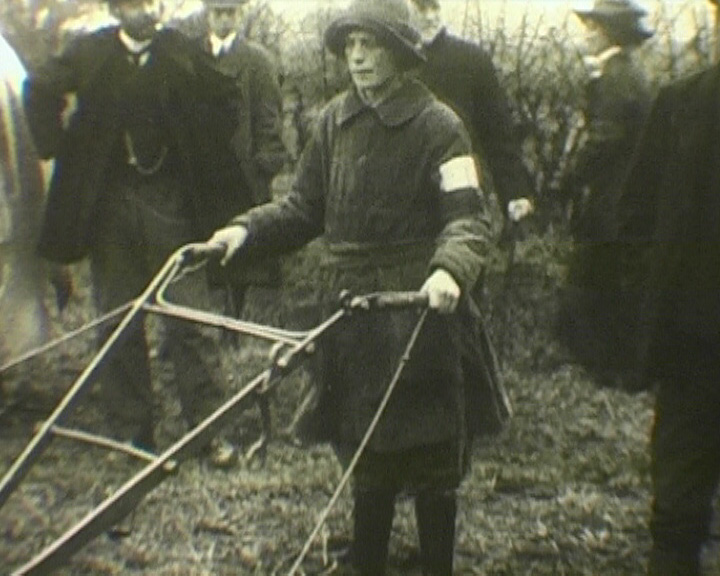 The first film in the compilation shows Godalming High Street busy with Christmas shoppers. A group of men walk out of a pub and pose for the camera, smoking and laughing. There are several close-ups of individual shops such as the butcher’s, the newsagents and a confectioners. Two army officers pose outside the newsagent’s and the proprietor is also seen outside. The road is busy with traffic and bicycles; a double-decker bus stops at a bus stop and passengers board the exterior staircase at the rear.

This film shows an inter-farm competition which took place on 18 April 1917 where women from the newly established Women's Land Army in Surrey demonstrated their ploughing and farm work skills in a series of competitive matches. The women starting the ploughing match are dressed in large coats and hats, and wear numbered arm bands. The women pose with the shire horses in the farmyard. A group of milk maids from Cross Farm's dairy also pose for the camera. A large crowd has gathered to watch the event. Several scenes show the women taking part in a ploughing match in the fields, working the horse-drawn ploughs. In another field, a hoeing competition takes place where a long row of women use hoes to turn over the soil. Back in the farmyard, a crowd watches as some of the women lead horses and carts through. A woman reverses a cart into a pole barn. There is a final shot of a girl sitting on a horse bearing a Red Cross emblem.

“The Path of Duty was the Path of Glory” The final film is a newsreel item showing the opening of the memorial to John (Jack) Phillips, the ‘Titanic’ hero, in Godalming, on 15 April 1914. The crowds gather in the cloister gardens to watch the High Sheriff and Mayor unveil the memorial. Attendees include Phillips’ family, members of the memorial committee and the designer of the gardens, Gertrude Jekyll. There is a close-up of the plaque dedicated to Phillips, RMS Titanic’s Chief Radio Telegraphist, who lost his life when the ship sank in 1912.

The first two of these three films are thought to have been made by Mr W G Fudger who ran the Picture Palace on Station Road in Godalming.

Newspaper cuttings from December 1953 describe how the films were rediscovered and shown at the Odeon Theatre, Ockford Road, to an audience including the Mayor and Corporation.

It should be noted that although the title of the first film refers to Christmas shopping, there is no apparent evidence of it being Christmas in the street scenes shown.

The second film shows the members of the Women's Land Army which had been established in January 1917.

Of particular interest in the final film is the presence of Gertrude Jekyll.

Another, longer version of the film segment showing the Women's Land Army is held at the BFI and can be viewed online.
https://player.bfi.org.uk/free/film/watch-surrey-women-war-workers-demonstration-at-cross-farm-shackleford-1917-online

Godalming Museum’s collections focus on the history of the town. In addition, “Godalming Museum is rich in material on Jekyll and Lutyens, creating a permanent exhibition room, a Jekyll garden and carrying a superb collection of drawings by both the garden designer and architect.” The Museum’s website has a page about Jack Phillips, and also has a useful Links Page providing links to other sites relating to Godalming history.
http://www.godalmingmuseum.org.uk/

In addition to its permanent exhibits, the collections of the Imperial War Museum include Film and Video, Photographs, Sound, Art, Documents and Printed Books. The collections’ database is searchable online.
http://www.iwm.org.uk/collections-research

The Mass-Observation Archive holds material relating to the experiences of women workers in wartime, although from the Second World War, not the First as featured in this film. “Much of the material in this collection, an investigation of wartime employment for women, results from the ATS Survey of 1941. There are detailed, inside reports on all aspects of WAAF life. A collection of letters from women munitions workers is included however, together with material concerning employment in civil areas, and information on women's organisations. This material is related to women's attitudes to war work and omits references to other areas of their lives, for which relevant Topic Collections should be consulted.” A search facility is available online.
http://www.massobs.org.uk/index.htm

The Museum of English Rural Life at the University of Reading houses collections which include items relating to the Women’s Land Army from both world wars. The Museum’s database is searchable online.
http://www.reading.ac.uk/merl/

The Surrey History Service collects and preserves archives and printed material relating to all aspects of the history of Surrey - amongst these are the records of 'The Music and Dancing, and Racecourses, and Explosives Licensing Committee' (1889-1930) of Surrey County Council which detail the approval, transfer or rejection of Cinematograph Licences throughout the county. The Centre also has a special collection on Gertrude Jekyll, as well as a selection of films from the South East Film and Video Archive, and its collections catalogue is searchable online.
http://new.surreycc.gov.uk/heritage-culture-and-recreation/archives-and-history/surrey-history-centre

The Women’s Library at the London School of Economics, houses the most extensive collection of women’s history in the UK. Catalogues are searchable online.
http://www.thewomenslibrary.ac.uk/index.html

Newspaper cuttings from Dec 1953 relating to [Christmas Shopping], report on the film being rediscovered, screened and donated to Godalming Museum. The cuttings also names the shops that appear and some of the people.

A brief history of cinemas in Godalming. A copy of this article is available at the Surrey History Centre.
http://new.surreycc.gov.uk/heritage-culture-and-recreation/archives-and-history/surrey-history-centre