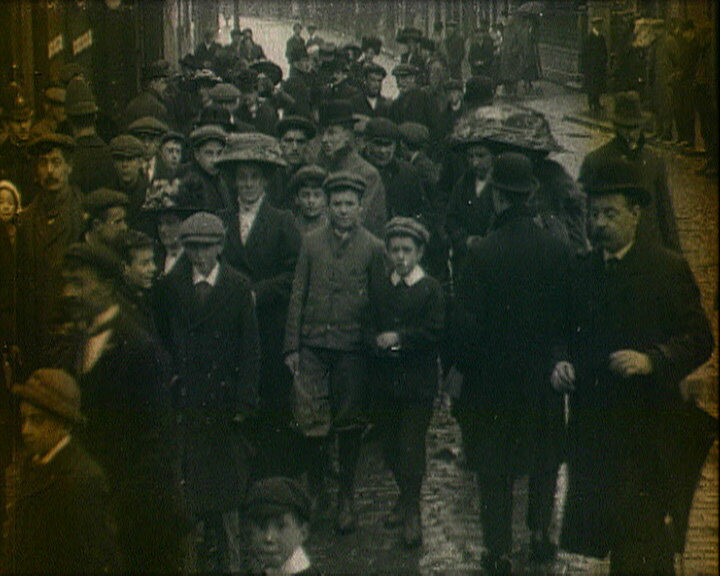 On a rainy winter's day in 1911 policemen, councillors, local dignitaries, firemen, postmen and telegram boys walk in a civic procession along Godalming High Street, passing The Pepperpot and Midland Bank on their way to the Parish Church. The exclusively male procession is watched and followed by civilians dressed in their Sunday bests.

The town gathers again six years later at a service of dedication in Phillips Memorial Ground. The 2,000 strong crowd, the combined choirs of Godalming, Farncombe and Busbridge, the 166th Canadian Band, and members of the armed and emergency services pose next to the ambulance which the town has gifted the Red Cross. Major Wells, the Chaplain in Chief to the Canadian Forces stationed at the nearby Whitley Camp, leads the outdoor service before Red Cross representative Sir Herbert Jekyll joins Godalming Mayor Charles Burgess in an inspection of the new ambulance.

The second item on [Godalming Church Parade & Ambulance Presentation] (1911; 1917), and most probably the first, was filmed by Mr W.G. Fudger, the manager of The Godalming Electric Picture Palace which was located on Station Road. The Picture Palace was the first purpose-built cinema in the town, seating approximately 300 people. It was the dominant supplier of moving images in Godalming during the 1910s and as such it was in Fudger's interest to supply images of local interest, images that would attract a local audience into the cinema. Both of the events captured on film in [Godalming Church Parade & Ambulance Presentation] (1911; 1917) served this purpose - they were significant moments for the local community; today they serve as important historical records.

The first film records the annual Mayor and Corporation Church Procession to Godalming Parish Church. Parades like these were common subject matter in early actualities and newsreels - as moments of visual spectacle they were perfectly suited to the moving image medium. In addition, the official nature of the Church Parade encouraged a feeling of community pride in the town's human infrastructure (the police force, the fire service, etc) - a feeling that could be rekindled at subsequent cinema screenings.

The feeling of community pride mentioned above was central to the event recorded in the second film, namely the presentation of an ambulance to the Red Cross for usage in the war effort. The money needed to pay for the purchase and upkeep of this modern vehicle had been raised in a prolonged fundraising effort by the Godalming Commercial Association. It was an activity being repeated across the country during the First World War - communities pulled together to support the war work of the Red Cross and St John's Ambulance. The civilian war effort was crucial to a successful campaign in Europe, and propaganda was the key tool used to raise awareness and activity. Newsreels played an important role in the propaganda machine, relaying positive images to a nation of cinemagoers. The filming of the ambulance dedication in Godalming served this purpose - it was shown nightly at The Picture Palace in the week following the service, instilling in the audience a sense of local (and national) pride and unity.

Screen Archive South East holds two other films known to have been filmed by W.G. Fudger - they feature in the compilation [Christmas Shopping]; Surrey Women War Workers; The Path of Duty was the Path of Glory (1914 - 1922) and contain images of local interest.

Screen Archive South East also houses a number of amateur films which record the community and town of Godalming throughout the decades. These include Godalming Carnival Week, 1924 (1924), Coronation Day in Godalming (1953) and Godalming '400' (1974) which records events celebrating the town's 400th anniversary.

A copy of this book, which features a good collection of archive photographs of Godalming, is available at the Surrey History Centre.

The Surrey History Service collects and preserves archives and printed material relating to all aspects of the history of Surrey - amongst these are the records of 'The Music and Dancing, and Racecourses, and Explosives Licensing Committee' (1889-1930) of Surrey County Council which detail the approval, transfer or rejection of Cinematograph Licences throughout the county. The Centre also has a selection of films from Screen Archive South East, and its collections catalogue is searchable online.
http://new.surreycc.gov.uk/heritage-culture-and-recreation/archives-and-history/surrey-history-centre

The people of Birkenhead present a new ambulance to the Red Cross in this Pathé newsreel. The film can be accessed via the British Pathé Website. British Pathé holds several other films relating to Red Cross ambulances during the First World War.
http://www.britishpathe.com

This is a Gaumont Graphic newsreel in which the women of Deptford present ambulances for the war effort. The film record can be found on The British Universities Film and Video Council's News On Screen database. The database also holds several other films relating to First World War ambulances.
http://bufvc.ac.uk/newsonscreen

A brief history of cinemas in Godalming. A copy of this article is available at the Surrey History Centre.

Surrey Advertiser and County Times* and *Surrey and Hants News

Both of these local newspapers cover the events filmed in [Godalming Church Parade & Ambulance Presentation] (1911 & 1917), detailing the participants and the moments not captured on film. The archives of these newspapers are available on microfilm at the Surrey History Centre.

This is the website for the British Universities Film and Video Council (BUFVC), "a representative body which promotes the production, study and use of film and related media in higher and further education and research." The website includes the News On Screen database and has links to various newsreel resources.
http://bufvc.ac.uk/