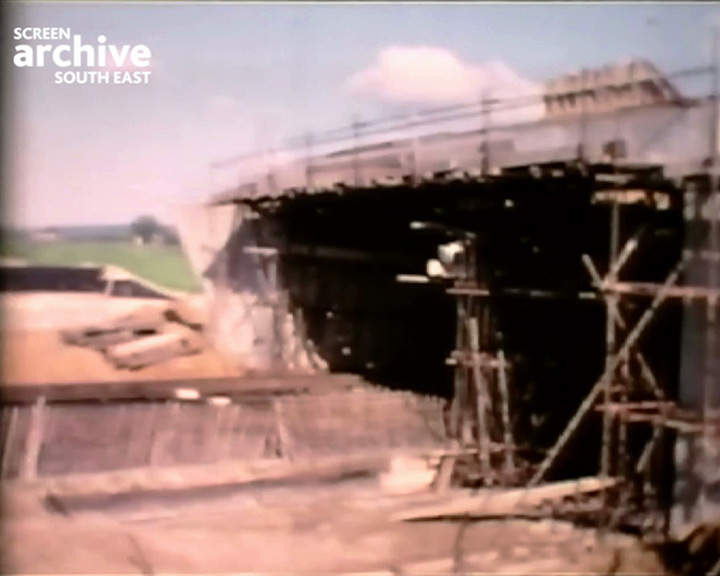 The construction of the M2 motorway in Kent is captured in this amateur film. The film features close-up and aerial shots of construction work along the route of the motorway, including the road surface being laid and bridges, cuttings and fly-overs being built. An opening ceremony is held to mark the completion of a particular section; a car tours the newly opened stretch of motorway.

The film opens with shots of a congested road; drivers get out of their cars to wander around and fix engines; a lady sells items from a tray. Shots of diggers and trucks shifting soil on the route of the M2 motorway; heavy plant equipment is used to excavate chalk along the length of the Blue Bell Hill cutting. Hardcore is laid to form the basis of a road surface; shots of a bridge under construction followed by aerial shots from a helicopter flying along the route of the road; the surrounding rolling green hills and fields are in stark contrast to the roadworks cutting through them. Close-ups of men operating machinery; shots of a fly-over; sign: "Laing". A train emerges from under a bridge being built. Shots of Medway Bridge in the distance, sections of which are under construction. Tarmac is laid with the help of a diesel-powered roller. Close-up shots of the workings of a concrete mixer; the mixed concrete is laid to form a road surface using a concrete paving train. Aerial shots from a helicopter, some showing completed sections of the motorway with bridges, cuttings, slip roads and junctions. Shots of an opening ceremony; people stand on a bridge and sit in a temporary grandstand on the edge of the road; a smartly dressed man makes a speech from a covered podium on the road and lots of people are milling around. Shots from a moving car, signs: "Margate Dover M2; Rochester Chatham A2" and "M2 motorway 200 yrds ahead"; extensive shots of the completed motorway, a few vehicles are travelling on it. The film ends as the car joins a single carriageway road from the motorway. 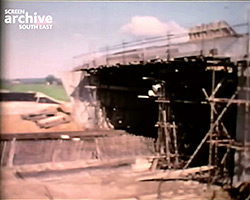