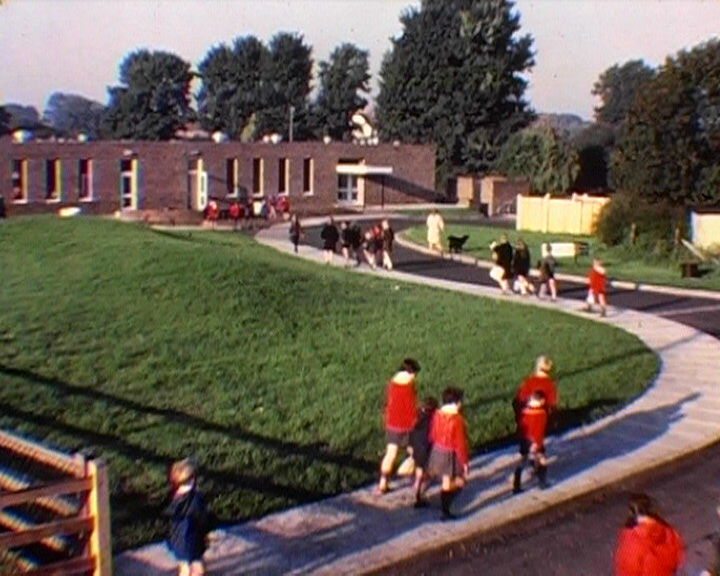 This professional film with commentary and interviews charts the move of Eastergate Church of England Primary School from an unsuitable, overcrowded 19th century building to a new purpose-built open-plan site in 1970.

The films opens with images of children walking and cycling through the Sussex countryside to Eastergate Church of England Primary School. Exterior shots of the 140 year old school building are followed by interior shots of the children in classes - the rooms are too small to comfortably accommodate the 110 pupils and have to be adapted for each new activity such as painting, drama and reading. Lunch is eaten on tables in the playground during the summer months. Mrs Brisland, the Headmistress, and Mr Paterson, the Deputy County Architect, are interviewed about the process of designing a new school - their words are supported by shots of an architectural computer programme and model, and by children's paintings. The interior of the new open-plan school is explored - the modern, spacious and well-lit facilities include a library, a workshop, a music room and a dining area. The children talk about their favourite features of the new school. Shots of the empty, darkened old school building and an exterior shot of the new building end the film. 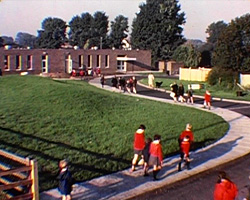 A New School for Eastergate (1970) was commissioned by The Electricity Council as a promotional tool. The Council used films to publicize its work - in the late 1960s it was involved in the project to develop a new building for Eastergate Church of England Primary School. Screen Archive South East holds a number of other Electricity Council films including Give us a Ring (1955), which was about the new ring main system being adopted in the UK, and Time to Eat (1973), which looked at the use of electricity in the catering industry.

The history of Eastergate C.E. Primary School can be traced back to 1838. The original flint building, as seen in A New School for Eastergate (1970) was built between 1838 and 1845 on part of the glebe. After the new building opened near the Wilkes Head Inn in September 1970, the old building became a school of arts and dancing, and later a private house. The new building was the first completely open-plan design in West Sussex. The concept of open-plan schools emerged during the 1960s and 1970s at a time when the individualisation of teaching/learning methods was gaining prominence in the education psyche. However the buildings which evolved alongside modern teaching philosophies failed to take root in the education system, primarily because of their noisy working environments which disrupted both staff and pupils.

This book contains histories of the villages of Barnham and Eastergate since 1864, including a brief history of the Eastergate Church of England Primary School. Copies of are held at Chichester and Worthing Libraries.

This journal contains articles written in the 1970s which comment upon the design features of Eastergate Church of England Primary School. The articles are searchable via the online database of AHDS Visual Arts
http://www.ahds.ac.uk/

The website for British History Online, "the digital library containing some of the core printed primary and secondary sources for the medieval and modern history of the British Isles." It includes material from Victoria History of the County of Sussex - Volume V (i) has a detailed history of Eastergate. Copies of the books are available at various East and West Sussex libraries.
http://www.british-history.ac.uk/

The website for Eastergate Church of England School.
http://www.eastergate.w-sussex.sch.uk/