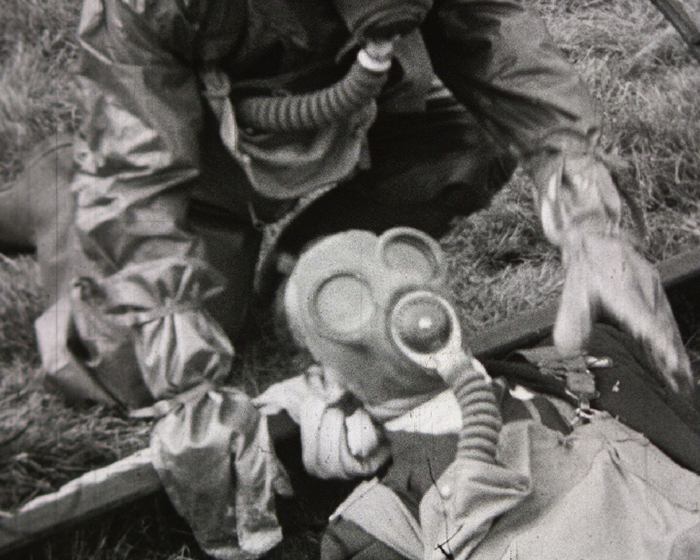 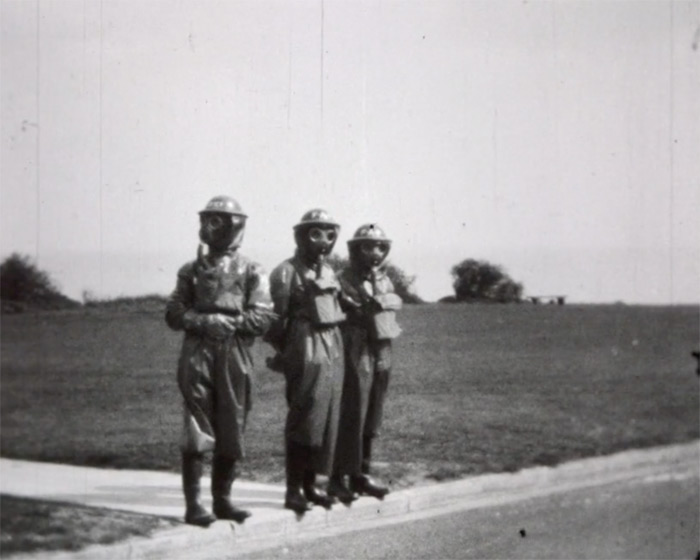 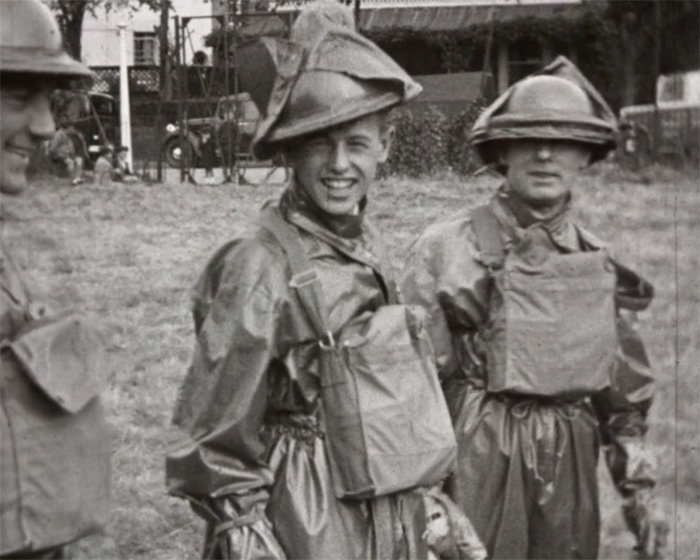 Some of the evacuees arrive. Groups of children accompanied by adults are seen walking along Station Road, from Spenser Road towards the town centre.

Fire Service at work, how to extinguish an incendiary bomb

Members of the fire service are seen operating equipment and attempting to extinguish a burning incendiary bomb.

At the coastal road

A group of women sit in deck chairs and a group of men sit on the ground outside a hut with the words 'Herne Bay' painted on the side. A woman arrives with a shopping bag.

At the ambulance station

First Aid training exercises take place. A man acting as a casualty lying on the ground is tended to by people in protective suits and gas masks. The casualty is also wearing a gas mask as he is tended to. The men smile and shake hands after the exercise is finished. A mock casualty is carried on a stretcher. At Underdown Road a door is seen surrounded by sandbags with a sign reading 'First Aid Post 160 yds' i

A group of men and women are seen marching and carrying out drill practice. A series of titles read: "These people are on duty night & day; and are fully trained; we might get this" followed by a montage of war-time images including: an aircraft flying overhead, an incendiary device exploding; the fire brigade leaving the fire station; scenes of bomb-damaged buildings with mock casualties lying in the rubble, including women and children. Further rescue exercises take place with men carrying the mock casualties by stretcher to a trailer with 'Herne bay ARP Casualty Service' printed on it. Women and men in the Casualty Service tend to the victims.

A gathering of people stand on the sea front to hear a speech.

Men emerge from a house carrying blankets. A further title reads: The 'Casualties' keep warm. A group of men are seen playing leapfrog . A lorry marked 'First Aid Mobile Unit' arrives and women emerge from the truck to tend to the casualties, some of which are then loaded into the ARP trailers.

A group of people are seen assembling outside a house, formally the Silver Slipper night club, in Bullockstone Road. A car arrives containing men wearing gas masks who make their way into the burned out house, they secure the area and put up a 'Danger Gas' sign. A path by he house is hosed down and brushed and white powder is spread around. Casualties are seen being rescued, one from an upstairs room..

Casualties are tended to and some are carried on stretchers.

A group of people assemble outside a building by a sign which reads 'Entrance to sea caves'. They make their way into the tunnels reappearing by the sea. Signs reading 'Public Tunnel Shelter' and 25 steps. A group of people emerge from the tunnel and climb the steps. The film switches to a scene of men playing football possibly in Victoria Park.

Sunday April 14th The biggest test to date - over 100 casualties

ARP trailers are seen being driven along a street. Two men stand by a telephone box followed by a group in gas masks. A lorry is then seen driving along a street. Casualties are taken into a building with signs outside indicating separate Male and Female first aid treatment rooms and an entrance for 'Females Gas Cleansing Treatment'. Other casualties wearing gas masks are placed in various vehicles including a laundry van.

A vehicle is seen being painted while another is being washed

The new mobile unit under construction

A vehicle is seen being painted probably while people in army uniforms are seen training in the park in the background.

Three women are seen sitting knitting, a group of men and women play mahjong outside. A group work at various gardening activities, including lawn maintenance.

A group of men carry out maintenance on vehicles.

Groups of men, women and children from various organisations are seen marching by the junction of William Street and High Street. The groups include women in WRVS and Red Cross nurse uniforms along with men in ARP uniforms and the boys brigade. Various scenes of the parade members and onlookers include posters in the background including "Your Courage Your...[Cheerfulness Your Resolution Will Bring Us Victory]" The film ends with people from various organisation conversing and departing. Title: The end 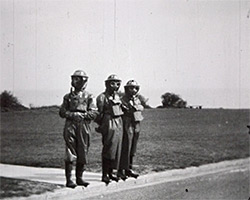 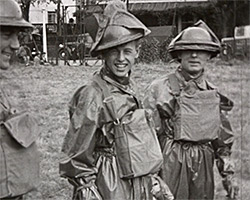