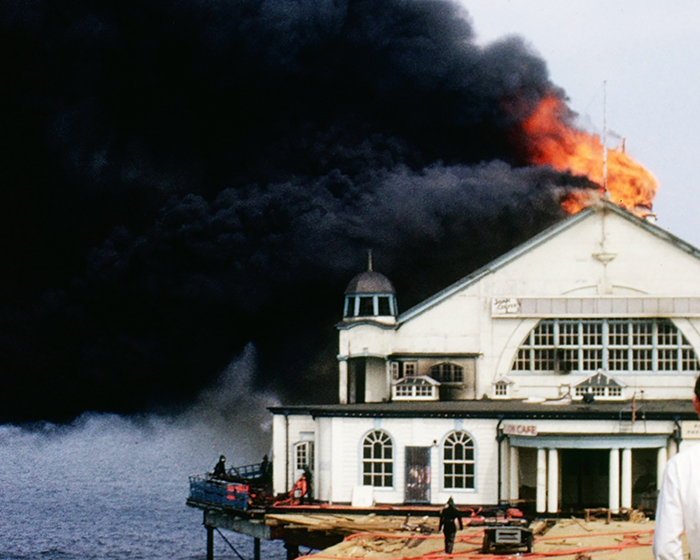 Construction work on the sea defences is shown between the hundred steps and Bishopstone. Various vehicles and equipment are used to construct the grading of the bank. A group of children play near the site.

Stalls and sideshows feature in this annual event held in the grounds of the hospital. The 1st Herne Bay Scouts band is seen. Local dignitaries give speeches and there is a coconut shy.

The Archbishop at Reculver Ceremony

The Archbishop of Canterbury, Michael Ramsey is seen at Reculver Towers with a choir and dignitaries conducting a service. They walk pass the coast guard cottages.

The Chairman calls the tune

A military pipe band is seen parading along the seafront, near the clocktower, with crowds lining the street to watch. A float from Herne Bay is then shown with a man dressed as Henry VIII with an entourage, followed by horses, parading through a street in Canterbury.

Sailing dinghies are seen in the Bay possibly from Herne Bay Sailing Club.

The annual Carnival is shown with the dignitaries taking their seats by the bandstand and the procession led by a military pipe band. Carnival queens from local towns are shown together with local organisations including Borg Fabrics, dressed as characters from the Jungle Book, performers on unicycles, the Cabin Herne Bay Youth Centre and Herne Bay Amateur Rowing Cub.

At this point the film becomes silent

The film shows a fete, possibly in aid of 'Cripplecraft' (charity for children and adults with disabilities) at Strode Park. A young woman in a wheel chair is shown.

A demolition site is shown where a number of houses appear to have been taken down. In the next scene paintings are being exhibited for sale outside, close to the bandstand. Visitors view the work on show and chat to the artists or stall holders, many of whom are elderly. A sign declares that a General Market is held every Saturday. Scenes at the market show the public and stalls. Various people are filmed at the event including a man with a camera and a small monkey in a knitted suit. This is followed by women playing tennis, possibly at Herne Bay Tennis Club.