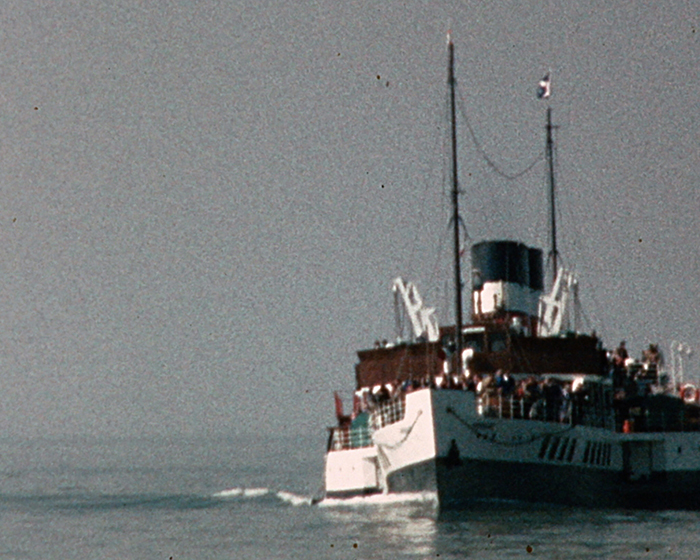 A poster advertising 'Waverley, the last sea-going paddle steamer in the world'. On the quayside of Whitstable harbour, a band from the local Sea Cadets (Whitstable Unit 363 Vigilant) plays. Looking out to sea a Kent Police boat passes by and then the film shows the paddle steamer approaching the harbour. Other small speedboats and a water skier cross in front and around the Waverley as it comes into Whitstable. Passengers stand and wave on the deck. From the quayside, onlookers watch the steamer arrive and some take photographs.

Once the Waverley has docked, the passengers disembark. The Sea cadet band then takes its place on the deck of the Waverley and start playing. Passengers stand on the deck. A banner on the ship reads: 'Scotland's Holiday Isle; Rothesay & Isle of Bute'.

Various scenes of people on the boat and the quay show the vessel preparing to depart for its return trip to Tilbury & Gravesend. Scenes downstairs in the engine room show the pistons working then outside, the paddle wheels are seen turning as the boat leaves the dock.

The Waverley departs Whitstable with packed decks and many people dockside waving. It steams off into the distance across the Thames Estuary. Further scenes filmed on the boat are followed by views of the harbour as the ship pproaches Gravesend where crowds await the arrival of the ship. The sea cadet band plays again. The Waverley then departs Gravesend & travels further up the Thames passing many large cargo boats & tankers docked & unloading their cargos.

As it travel further through the Thames Barrier towards Greenwich and on towards the Tower of London, Traitors Gate, Tower Bridge and many other landmarks of London on its journey, while the daylight fades.

The Waverley is then seen berthed in London and new passengers board the vessel. She leaves on her return trip to Whitstable, again passing under the raised Tower Bridge.

The Waverley paddle steamer was launched in Glasgow on 2nd October 1946.