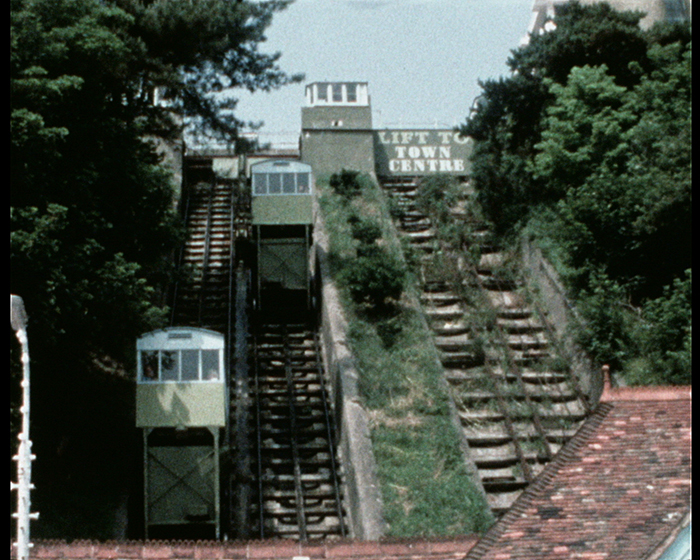 This edited colour compilation opens with scenes at R.A.F. Manston airfield near Ramsgate, Kent. A Spitfire aeroplane that once flew from this airbase during WW2 sits on display at the Station gate. An East Kent single decker bus passes through the scene as an RAF flag comes into view on the Station Headquarters building of the Royal Air Force, Manston. A close up view of the Supermarine Spitfire Mk XVI aircraft bearing the registration TB752 follows. The film explains that the aircraft was built at Castle Bromwich in early 1944, the later version with clipped wings to attain higher speeds. This plane (TB752) was used in the movie 'Reach for the Sky'. It was moved to Manston in 1955, but was moved again, to the Royal Aeronautical Society, in 1978 for restoration. On the 15th September 1979 it was returned to Manston. A decision was made to place the aircraft under cover. The Museum that it now stands in was built in 1981.

Looking across the airfield a German fighter plane stands idle, with a second aircraft to the left of it. In the background a commercial jet sits near the terminal buildings.

A view captured between 1953-1955, looks towards Canterbury Cathedral from the old redundant tunnel of the Canterbury & Whitstable railway (Crab & Winkle line). An earth mover is flattening the ground where the old railway lines used to enter the tunnel. Archbishops School, St Stephen's Road, Canterbury was built on the site. The school opened in 1956/57. A view from inside the tunnel entrance follows, now inside The Archbishops School, which is today blocked up and filled in. The tunnel started to collapse when the University of Kent was built in 1965.

The next section opens with scenes showing St Stephen's Green from the early 1970s looking across to 'Ye Olde Beverlie' pub, the Alms houses are to its right. The film shows the old St Stephen's School and the route of the former C&W line along with Archbishops school, with the University in the background. A zoom in across the tennis courts shows the disused tunnel entrance, a gated entrance to a house, and signs of where the old line ran. A boy makes his way through the undergrowth to the other end of the tunnel entrance. A ventilation cover for the tunnel can be seen.

The Folkestone Leas Cliff Railway, is shown, as filmed in the early 1980s. There is a view of the opening times and the charges by Shepway District Council. Adults 15p, Children, Pushchairs, Bicycles, Dogs, and Old Age Pensioners are all 10p. Prices were one way. Each carriage took a maximum of 14 persons. This water balanced funicular lift was opened on 21st September 1885. On the 13th August 1890 a second pair of lifts was built alongside the first one. As we see the lift ascend to the top, the other one descends to the bottom. At the top a view along the Leas. A shot of the twin cables pulling the lift up. The passengers alight at the top on a lovely sunny day. We now see the tank of the top carriage being filled with water to make it heavier than the bottom car. When this happens the brakes are released and the carriage descends & the bottom carriage ascends. The water is then released into the bottom reservoir. It is the pumped back to the top reservoir ready to be re-used. When it was first built water was emptied onto the beach. A view of the operations room and the controller. The second pair of lifts lay idle and overgrown. These were closed in October 1966. When both lifts were in operation there was an 80,000 gallon reservoir at the bottom and at the top an 100,000 gallon reservoir. Views from the top across the beach, Folkestone Harbour and a Sealink cross channel ferry. On the Leas we see the Leas Pavilion Theatre. Back to the controller and the Leas lifts.

Canterbury West Station, filmed in about 1975/77. A view from the the signal box, built in 1928, looking East at a train arriving. Now looking West we see the station and a train arriving. The Westgate Towers just in view. To the left is the Goods shed and in the background the level crossing in St Dunstans Street. Inside the signal box we see a layout and plan of the station lines, points and signals etc. A signalman operator is seen pulling levers to control the trains on the line. This signal box had 72 levers, although many were painted white as they were no longer being used. A train arrives at the east bound platform from London. A signal shown in the up position, in the background is Roper Road. The train departs, and in a yard in Roper Road we see Pickfords Removals lorries. A view of the Canterbury West signal box.

A few miles down the line towards the coast is Sturry station and signal box. Sturry Station was opened on 13th April 1846 to form part of South Eastern Railway's (SER) expansion into Thanet. A train pulls into Sturry station, which is next to the level crossing. Once the train departs the station the automatic barriers lift and allow traffic to use the crossing. These automatic barriers were operational from June 1974. We see the operator inside this signal box operating the levers, the ones painted white are unused.