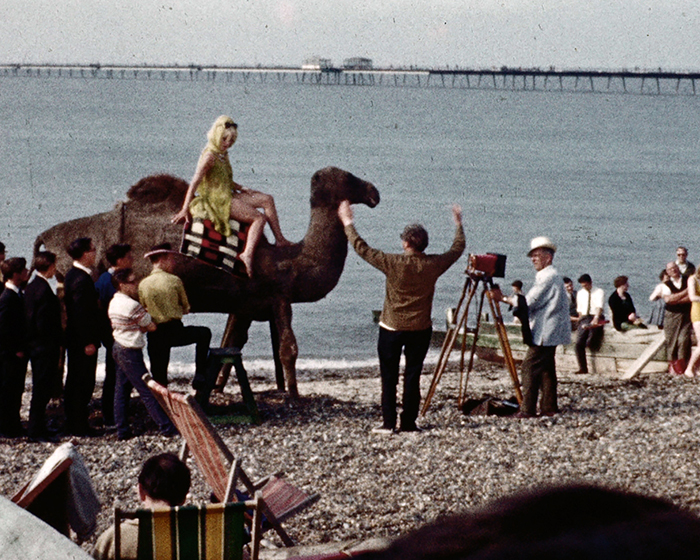 With musical accompaniment, the film shows scenes of Winter 1963 with snow falling on the streets. The commentary states that "We won't forget easily the Winter of 1963. It'll be remembered as 'The Year the Sea Froze'". Scenes around the town show snowy streets of Herne and Herne Bay along with Herne Church, Beltinge Hill, Hill Top Road, William Street Car Park and William Street.

The special fete organised towards the end of the Summer to raise funds for ‘Freedom from Hunger Year’ is featured. Councillor Mrs Fortune, Chair of the Council, is seen opening the event and a little girl is presented to the Councillor and curtsies for the camera. The fete stalls and sideshow games are dampened by the onset of rain.

Councillor Mrs Fortune, Chair of the Council, is seen again opening the event, organised by the League of Hospital Friends, which features a variety of stalls and games.

Camera crews and actors are filmed on the beach making a Ken Russell's feature film 'French Dressing'. The first scene filmed on the beach shows a woman sitting on a stuffed camel. The commentary states "Robert Robinson of the BBC, James Booth, Marissa Mell; all the glamour of the film world descended on the town in May and quite literally took it over". Various scenes show filming taking place, actors and extras in costume and crew behind the scenes. [Further information about the cast and crew filmed here, is available in the 'Contextual information' section].

Lead by the band of the Royal Kent Regiment (The Buffs). Herne Bay High Street and Clock Tower are shown. The float featuring MIss Herne Bay appears watched by the local Mayor and dignitaries including Councillor Mrs Fortune. The Pearly King and Queen are seen collecting money. Other floats include Corralls and representatives from several local towns.

The last trip of the ‘Medway Queen’

Herne Bay Pier is shown with crowds waiting to see the last sailing of the Medway Queen, a paddle steamer, which was involved with the evacuation of troops from the beaches of Dunkirk. Councillor Mrs Fortune and other members of the council watch as the Medway Queen sails away from Herne Bay Pier for the last time, although hope is hinted at as the commentary mentions ongoing attempts to save her from the breaker's yard.

Herne Bay Clock Tower and pier in the background

Further information about the filming of 'French Dressing'

The camel was owned and provided by the performer Bruce Lacey. Bob Scrivens, a seaside photographer from Herne Bay, is seen standing by the camera wearing a blue shirt and white hat. Robert Robinson, the BBC Presenter, is seen wearing a dark suit and tie. In front of him is Marjorie Lavelly, continuity. In front of her is Ken Russell, the director, in a brown jacket kneeling down. Behind her standing wearing sun glasses is believed to be Jack Stevens the set designer. Roy Stevens, the assistant director, is standing next to Robert Robinson. To the right of Ken Russell wearing a white shirt is thought to be a grip / dolly assistant and next to him in a dark top is Robin Vidgeon, Focus Puller/Camera Assistant.

The scene after James Booth’s name is mentioned shows a lady in a white dress, believed to be Shirley Russell the costume designer. To her left wearing a pale coloured top is Chic Waterson the Camera Operator and to his left is Robin Vidgeon, Focus Puller/Camera Assistant.

After the reference to Gormley on Sea, Marjorie Lavelly, continuity, is seen pointing towards the camera with Robert Robinson, BBC Presenter behind her, James Booth the actor wearing a brown jacket and Roy Stevens, the assistant director, facing Robert Robinson.

After a glimpse of the public watching the filming Robert Robinson appears again with Robin Vidgeon, Focus Puller/Camera Assistant holding on to a camera. It is a Mitchell BNC 35mm motion picture camera modified for Techniscope 2-perf. Behind Robert Robinson is Ken Higgins, cinematographer. The man in the white shirt is probably a grip/dolly technician and the man in the pale jumper is probably a clapper loader/camera assistant.

Following shots of the 'Platform Party', the girl in a sailor outfit with black hair sitting holding a camera (with Marissa Mell sitting doing makeup alongside) is Alita Naughton. The photographer opposite taking photos of Alita Naughton and Marisa Mell is David Hurn. The man with sun glasses sitting next to Marissa Mell is almost certainly Peter Brett, who wrote the adapted screenplay for the film and also features as an extra in various scenes in the film itself.

Returning to a closer view of the platform party in the foreground can be seen Ivy Emmerton, hair stylist, in a brown top facing Alec Garfath, makeup, who is next to David Hurn, photographer. Next to the camera is Robin Vidgeon, Focus Puller/Camera Assistant and Chic Waterson the Camera Operator. The actor Roy Kinnear is seen sitting on the steps of the platform.

Following another scene of the spectators, Roy Stevens is shown walking with a megaphone in his hand.

The final scene of the filming shows the actor Roy Kinnear in a bowler hat. David Hurn, photographer, with his back to the camera and Len Shilton, sound recordist, in a red top. Between Roy Kinnear and David Hurn can be seen Robin Vidgeon, Focus Puller/Camera Assistant. Ken Russell can be seen behind the tripod and with the camera is probably a camera assistant next to a still photographer. At the front of the platform party Brian Pringle is sitting next to Marissa Mell.