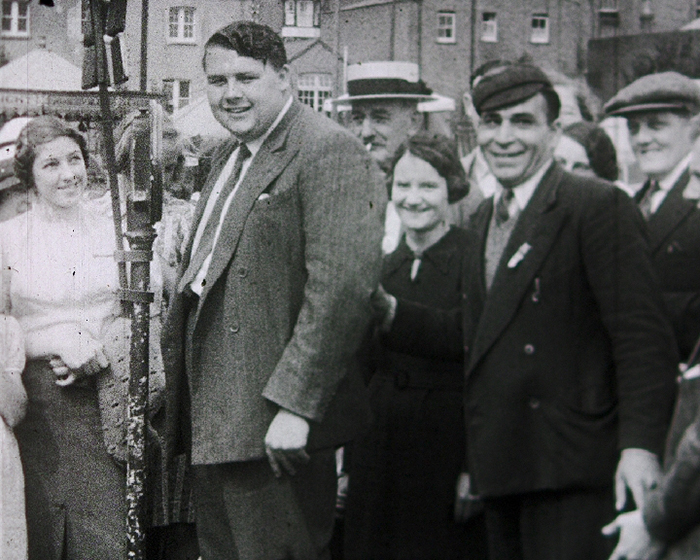 TITLE: Regatta Day A Large crowd stands on the waterfront to watch events in the regatta including rowing and sailing. A model train is shown giving a ride to children, people buy ice cream while others watch the events.

TITLE: The Tombola opened by film star Graham Moffatt The film comedy star Graham Moffatt is seen signing autographs seated in a horse and trap before the dignitaries assemble and he opens the town's summer fete. Various stalls at the fete are seen in use.

TITLE: Herne Bay Snowed up Herne Bay streets are shown covered in snow, including the promenade with views of the clock tower and pier. There are several scenes of people play-fighting in the snow while others clear the streets and pavements.

After Snow White, One of the Seven Dwarves

The film shows a man with dwarfism walking in the street.

TITLE: January 23rd 1940 Frozen Sea... a sight not easily forgotten Chunks of ice float in the sea, watched by onlookers on the pier and beach.

Though still only 19 years of age when he appeared in this film by John Clague, Graham Moffatt was already a familiar face on British cinema screens – starring with the popular comedian, Will Hay, in films like 'Windbag the Sailor' and 'Oh, Mr Porter.’

Herne Bay based amateur filmmaker, John Clague, produced a series of annual newsreels showing events in the town from 1934 to 1970. Using 9.5mm film at first, he progressed to 16mm film by the 1950s and his films represent an important visual record of Herne Bay history. An architect by profession, he set up his own company in the 1930s working on a diverse range of projects including the replacement of Herne Bay's Grand Pavilion, which was destroyed by fire in 1970.