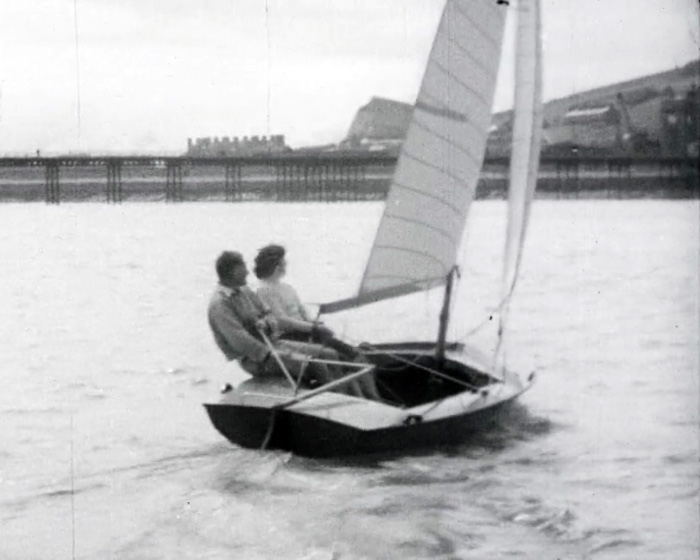 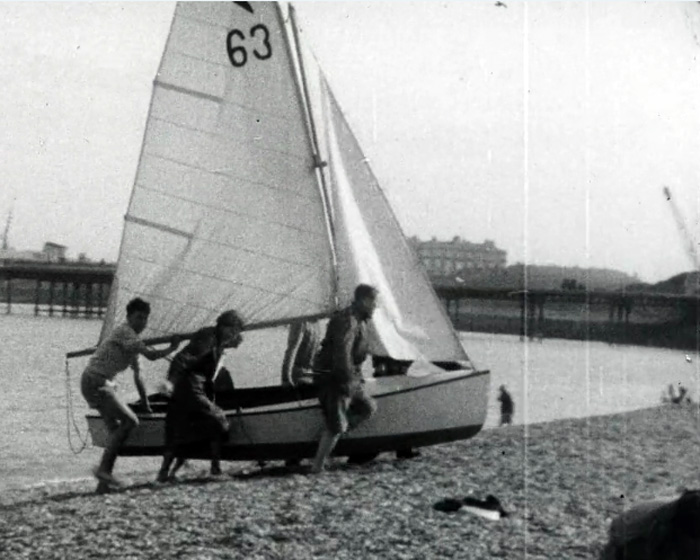 With accompanying music, the opening titles show the crest of the "C.A.C.S. Film Unit", followed by the film's title: "Yachting Week; Dover 1954", superimposed over a scene showing a captain's hat next to a nautical style table lamp.

The commentary explains that "Dover Harbour was the scene for the Kent Yachting Week in 1954". "The Royal Cinque Ports Yacht Club played host to the visiting Kent Clubs. Here is the club house overlooking the harbour." The scene shown is the stony beach in front of the promenade with Dover Castle high above the town; boats are being prepared on the beach by sea cadets in uniform. The four story high club house is shown.

A group of men are seen carrying a sailing boat down to the water's edge. In the background can be seen cranes on the Admiralty Arm, in front of it is the metal Prince of Wales Pier.

The commentary names some of the yachtsmen and women throughout the film including "Michael Pope who had a very successful week indeed, carrying off all three trophies for the Merlin class." More boats are shown being carried down to the water's edge by sea cadets..

Various classes of sailing yachts are seen on the water with the cliffs and town behind. The commentary points out: "here's one having a little spot of bother. Trouble we've all had in our time" "and very vexatious".

The Eastern Arm of the harbour is shown, leading down to one of the entrances into the harbour. In the background various ferries with smoke billowing out of their funnels. The commentary continues: "not much work for the safety boat" An old tug can be seen motoring up an down checking on the boats. In the background can be seen four masts on the cliff top, these are Chain Home Radar part of the Early Warning Radar System.

"Here are the Merlins at the start. Now they are off. Most of them are on the starboard but two boats as you will see go through the fleet" "ideal merlin weather today" "Through the rest of the week just a little too hard" First leg along by the shore". The boats race across the water. A redskin boat races along "with a distinct red sail". "Here we have the heron class going down to the start"

Out in the harbour is a floating platform with a man standing on it while filming is taking place from another boat.

"There goes a ship ferrying out of the harbour mouth" A two funnelled ship with smoke billowing is seen leaving the eastern arm of the harbour and outside the entrance is another shop passing by.

"This is the Heron class, there are twenty of them, many of them in the hands of beginners, who did very well later in the week", "not very much wind here they are only just keeping up"

Then a long boat with an adult at each end and three children in the middle is shown "here are some of the natives in a war canoe". A child is shown swimming just off shore.

"This is the army sailing association island class dingy". "the Dover Sea Scout's Heron Zodiac"
A lot of the people in the boats as they pass by are crouching low in the boats. "Here's a very boat shape boat indeed with a practically unpronounceable name which I won't even try" "a fleetwing" that is the name of the class of boat. A boat passes with an adult man and young boy in it. "There's plenty of weight in that boat, not enough wind to push it along". "The rescue boat seems to be getting a little restive, not enough work to do"; "wind falling away. The herons who were the last to start are finding it a long job to get home"

The commentary states: "there go the sea cadets a very good day's work they have done" on the promenade, they are seen, in uniform, carrying their kit bags. A boy is seen rolling up the mast on the shore before he carries it up the beach. A woman is seen tidying up her boat after the racing. The commentary states: "Here is Pat Burfield the skipper of 'Plankton', showing the fashionable in-shore hair-do".

A woman in a white summer dress stands on the edge of the shore skimming stones into the water.

The commentator mentions a yacht in the harbour who had come up from Cowes 24 hours too late. The commentary concludes: "Well that was the first and best day of Kent Week 1954, very peaceful. The weather for the rest of the week was to say the least foul. We were lucky to have this brief record of Kent Week at Dover because on no other day could a camera have been put afloat. Then '54 was like that. Here's to better luck in 1955". 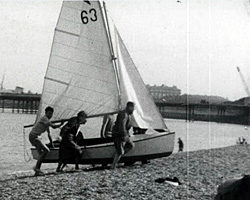