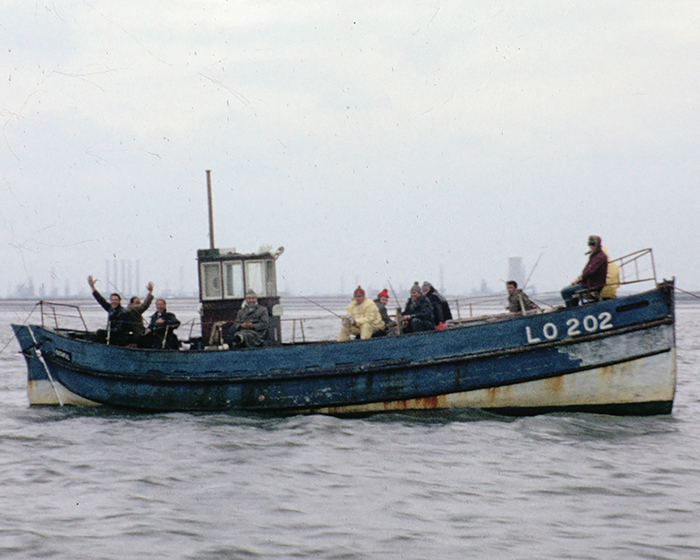 Beginning at Ramsgate harbour on a sunny day, boats are seen arriving and leaving the harbour. Sailing down the coast past Richborough power station towards Sandwich, the journey follows an inlet off the River Stour past the Pfizer site and up to The Quay in Sandwich, past William J Gardener's and The Bell Hotel. Returning from The Quay back towards Ramsgate, a small Rescue dingy comes alongside. Out in the channel a sailing boat 'Witchcraft' passes by. Now back in Ramsgate Harbour the boat is covered over.

The yacht 'Gipsy Moth IV' owned by Sir Francis Chichester is seen moored in the harbour. The famous yacht's deck is filmed in detail. Across the harbour at the Hoverport in Ramsgate, a Hoverlloyd Hovercraft SR.N6 is preparing to depart. The craft turns on land and launches into the harbour. Harbour scenes are captured, including visitors on the harbour front. On the quayside there is a small stall selling jellied eels, cockles, whelks and mussels.

Sailing out of the harbour towards the channel on choppy seas the yacht heads around the coast. Stopping along the way, they head past Broadstairs, North Foreland lighthouse, and other places on the North Kent coast, passing large ships, fishing and sailing boats including some Clippers on the busy shipping lanes towards London.

The journey takes the yacht past oil refineries and up to Tilbury docks, and the Power station. Passing Greenwich Museum, and the Cutty Sark, up towards Tower Bridge, people are seen waving from the bridge. Past the Tower of London, looking back a red London bus crosses the bridge. Under London Bridge, the boat travels past the Mermaid Theatre, on towards Westminster Bridge with Big Ben at 4.25pm. Continuing under Westminster Bridge and past the Houses of Parliament on the right, the trip continues under Lambeth Bridge, passing Cadogan Pier on Chelsea Embankment, under Albert and Battersea bridges, passing the many ships that are docked on the River Thames.

Just past Hammersmith Pier an 'Amphicar' Amphibious car takes to the water and is later seen returning to dry land. Margaret Clague is seen at the very end of the film, standing on the bow of the yacht as they draw close to Teddington Lock.

Seen in this film, the yacht 'Gipsy Moth IV' was owned by Sir Francis Chichester and is filmed here moored in the harbour at Ramsgate. The Gipsy Moth IV is the boat in which he famously sailed around the World single handed. He set sail from Plymouth on 27th August 1966 returning to Plymouth on 28th May 1967. It was never sailed again, but was put in dry dock next to the Cutty Sark in Greenwich. This footage in Ramsgate Harbour of Gypsy Moth may show it on a stopover on its last voyage from Plymouth up to Greenwich.

The Hovercraft seen in the film was owned by Hoverlloyd which commenced operations at Ramsgate Hoverport on 6th April 1966.

The rare Amphicar is seen traveling through a lock on the Thames, and later driving off up a slipway to the roads near Richmond pier. Less than 4000 editions of the Amphicar were produced between 1961 and 1965. They were sold in the UK from 1964. These cars were titled in the year they were sold, not when they were produced. This vehicle has a 'D' suffix on its Number plate, dating it's registration to 1966.