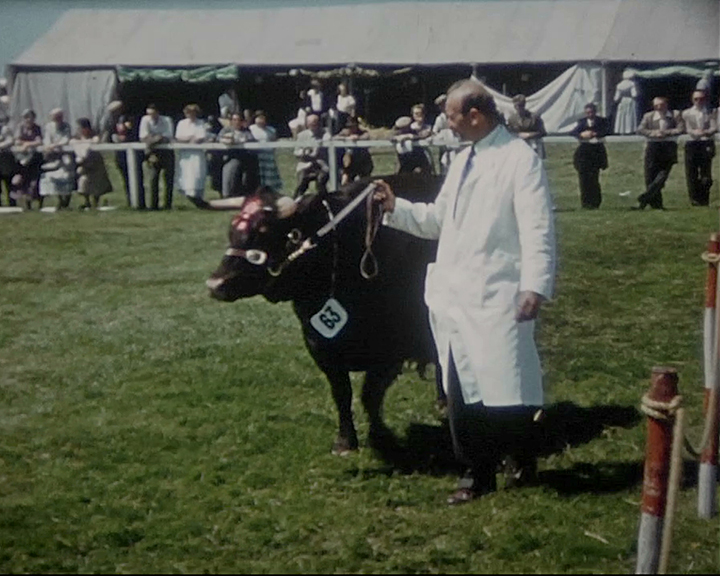 Intertitle: The Winter. The snow covered beach and town of Herne Bay in February 1958 is shown together with Herne Church, Hoath Wood Caravan Park and various scene of the countryside.

Intertitle: The Glenbervie Home Anniversary. Chairman for the day, Leslie Thomas, and his wife are seen at the Methodist Mission Home celebrating its 21st anniversary. The opening ceremony is performed by Mrs Thomas.

The film switches to colour at this point to show St, Bartholomew’s annual church fete featuring a variety of side shows.

Intertitle: The Town Regatta. Scenes from the roof of the Bandstand showing the rowing regatta with the pier in the background. This is followed by a large crowd watching the beauty contest judged by Mrs Jack Rogers. Mrs Tugwood presents the prizes.

Intertitle: : Model Boats in the park. Another feature of the regatta takes place in the Memorial Park with a demonstration of radio controlled boats organised by Colonel Taplin from Birchington Model Boats Club. A variety of powered and sailing craft are seen in action on the water.

Intertitle: Cripplecraft Fete. The annual Cripplecraft Fete in Strode Park takes place with Anthony Harvey as the Master of Ceremonies. Side shows and a trampoline feature and also a fancy dress parade.

Intertitle: Carnival. Spectators line the streets to watch the Carnival which is led by Miss Herne Bay on the famous butterfly float. Many other local town floats follow including: Whitstable, Margate and Ramsgate. Described by the filmmaker as one of the best carnivals ever. Other floats include The Royal Marines, CWS Squashes, Hillborough Caravan Park, Royal Mail, and the R.N. Minewatch Service.

An evening scene of Herne Bay beach as the sun sets follows with the pier in the background and the lights of the clock tower.

Intertitle: The County Show.
The Kent County Agricultural Show held in June in Mote Park, Maidstone is opened by Princess Alexandra (who arrives by helicopter). Lord and Lady Cornwallis accompany the Princess. Visitors mingle amongst the stalls and watch a range of activities including sheep shearing (featuring the champion sheep shearer of the county), equestrian events, foxhounds and demonstrations of craft skills. Suited men chat and smoke at the Vitovis stand and visitors crowd around stands and exhibits including: Tetts & Co, Faversham, G.B Arnold & Stricklands of Hastings and pass by a scale model of Calder Hall nuclear power station Windscale (now Sellafield). A large marquee signals the Rural Industries of Kent exhibits and scenes of a woman working a spinning wheel and blacksmiths at work follow. Lord and Lady Cornwallis are seen leaving the showground in their limousine, Lord Cornwallis waving as the car departs.