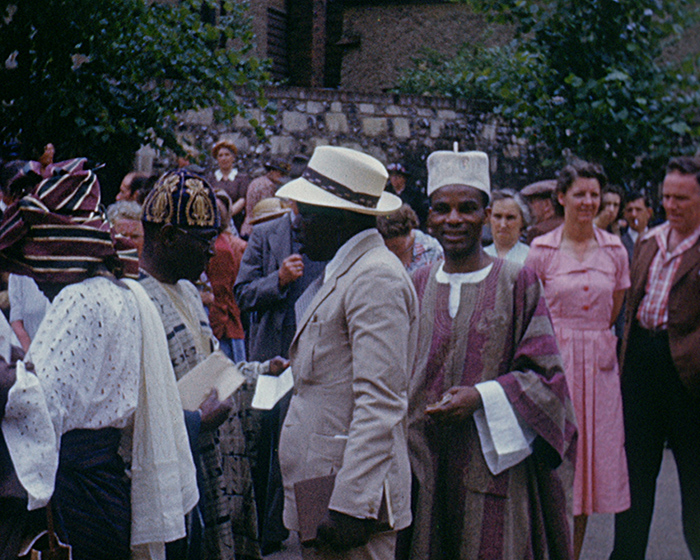 The Message of Canterbury to the World

Titles opening the film state: John Clague Presents 'Festival Celebrations In Canterbury', 'The Message of Canterbury to the World'. The film starts with shots of St Margaret's Street, Mercery Lane, Christchurch Gate in the Buttermarket. A narrator provides the viewer with information about the location. The city has been decorated with bunting and flowers. The film then shows visitors, some appearing to be from other countries or different ethnic groups, gathering in the Cathedral grounds as they arrive for a service. Banners are held indicating who the attendants are, including one reading 'Ceylon'. Dean, Dr. Hewlett Johnson greets the visitors at the entrance with the Vice Dean. The guests include Coronation Barons of the Cinque Ports, the Lord Bishop of Dover, the Chairman and Mayors of twenty towns in Kent, and members of Canterbury City Council. Music accompanies the procession.

The film shows footage of war damaged St Georges Street with Burgate and the Cathedral in the background. In the foreground is a sign for a proposed Woolworths store. A poster outlines organisations and local companies that helped and supported the Festival Exhibition. Different exhibits at the festival are shown, celebrating aspects of Kent.

The procession includes tableaux from different towns in Kent portraying historical characters and events associated with the county. The parade includes floats with tableaux of mediaeval kings and queens, farmers, and nurses. Chaucer's pilgrims are depicted on horseback in the procession. Also, people riding on penny farthings, a marching pipe band, vintage vehicles, a horse and carriage. There are members of the fire brigade, people dressed as Romans and Lord Nelson, a float for the National Coal Board and a float for British Railways - Southern Region - Ashford Works.